1 week ago 0 1 min read
We use cookies to provide a personalized experience for our users. By continuing to browse this site, you give consent for cookies to be used.
Got it!
Home > News > Ottawa > Ontario SCPA releases commemorative pin to honour the contributions of animals in war 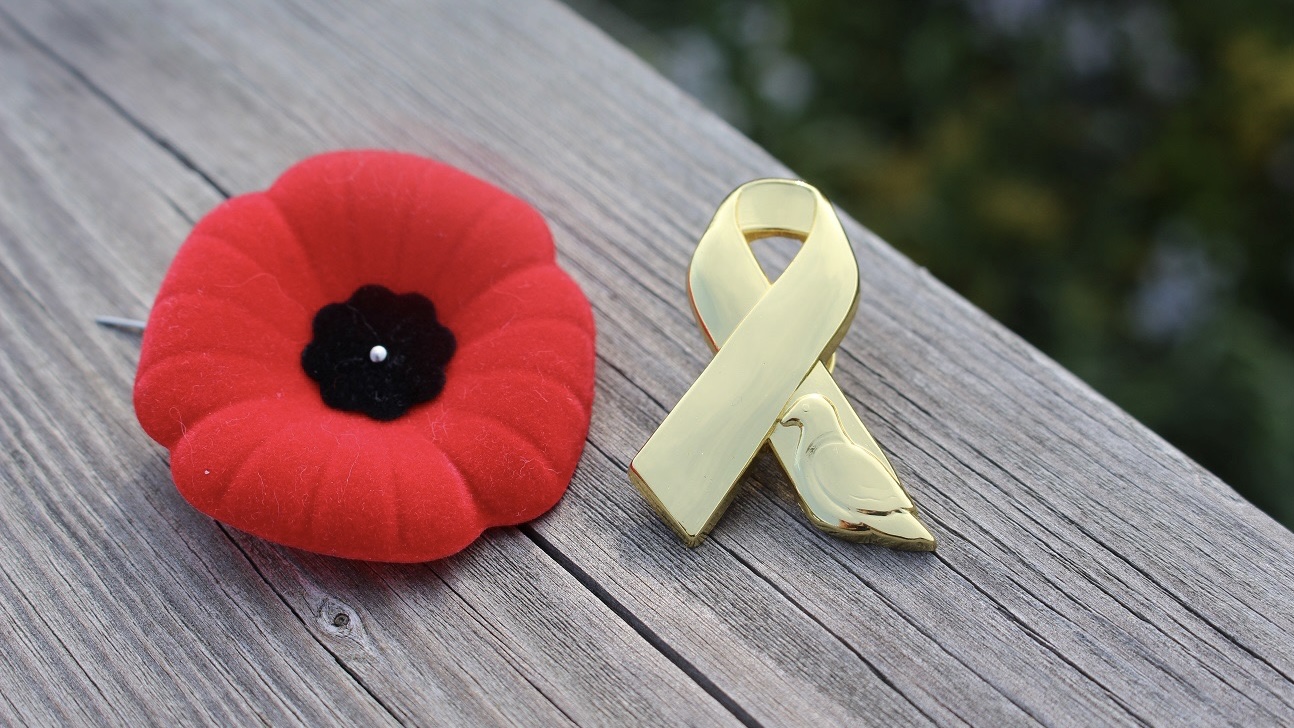 The Animals in War pin, which features a carrier pigeon this year, is meant to be worn alongside a poppy as part of the Remembrance Day commemorations culminating on Nov. 11. Sales of the pin, a fundraiser for Ontario's Society for the Prevention of Cruelty to Animals and Humane Society, pays tribute to the horses, dogs and other animals that have served alongside Canada's troops in several military conflicts throughout the country's history. [Photo courtesy of Ontario SPCA and Humane Society]
News

By Aimee Veiner and Shaked Karabelnicoff, 2 years ago 1 9 min read

The Canadian Animals in War Dedication, located in downtown Ottawa’s Confederation Park, recognizes and honours the countless animals that served alongside their human comrades in war. The monument was unveiled in 2012 and symbolically sits next to the South African War Memorial, a conflict in which Canada used 50,000 Canadian horses for mounted troops.

The statue depicts a life-sized medical dog carrying a first aid kit together with three bronze plaques that explain the significance of the memorial. The plaques detail the contributions of animals in war, including their roles and sacrifices. It notes that mules carried heavy artillery, horses carried mounted troops and hauled field guns, and carrier pigeons delivered messages to specific destinations. As depicted in the statue, dogs also played a significant role at war. They served as medical assistants, messengers, bomb detectors and for search-and-rescue missions, according to the plaque. The dog portrayed in the memorial is wearing an authentic replica of a medical backpack that war dogs used during the First World War.

The dedication also highlights that animals were unfalteringly loyal to the soldiers with whom they served. Animal paws and hoof prints are stamped in the concrete leading up to the memorial, representing the marks dogs, horses and mules left on the battlefield, according to the dedication.

The memorial committee was chaired by Laureen Harper, wife of then-prime minister Stephen Harper, and the artwork was created by Wakefield artist and sculptor David Clendining. A key advocate for the memorial was Major Lloyd Swick, a veteran from Winnipeg who served in multiple wars over the course of a military career that lasted 44 years.

Swick passed away in 2017 at the age of 94. Though he did not live to see the Ontario SPCA and Humane Society’s commemorative Animals in War pin, he would have admired the idea.As the founder and initiator of the Ottawa sculpture project, Swick spoke at the unveiling of the memorial and recounted his own experiences with animals at war.

“I was in Korea for a year. We had canine units and dog handlers who would take the dogs out on patrol,” he said at the unveiling, according to a CTV report at the time. “The dogs, with a tremendous element of smell, could detect if an enemy was present and the dog’s hair would bristle on its neck.”

Swick noted that his inspiration to spearhead a monument for Canadian animals in war came from seeing the U.K.’s Animals in War Memorial, located in London’s Hyde Park, which opened in 2004. Similar memorials that honour animals in war exist around the world, including in Australia, India, and France.

As Canadians prepare for this year’s Remembrance Day tributes to the men and women who have served the country in war, Ontario’s SPCA and Humane Society is reminding us that animals, too, played a key role in the First World War and other military conflicts.

The Stouffville, Ont.-based animal advocacy organization has released the latest in a series of pins to commemorate the contributions of animals in wartime ahead of Nov. 11 ceremonies across the province.

“When we think back to all of the incredible sacrifices that animals made during the war, and how much they really meant to the veterans who also served, it just felt natural for us to be able to pay those respects,” said Kallie Milleman, community development specialist with Ontario’s Society for the Prevention of Cruelty to Animals and Humane Society.

The Ontario SPCA and Humane Society, which represents dozens of affiliated animal shelters and veterinary care organizations, originated in 1873 and launched its Animals in War pin campaign in 2017.

As part of the campaign, a new pin is released each year showcasing a different animal’s wartime contribution. Previous animals commemorated include a horse and a dog; this year’s pin features a carrier pigeon.

The pins can be ordered from the society’s website, and cost $12.

“Funds from the sale of the pin help provide care for animals in need, as well as support our veterans,” the society stated in an Oct. 13 announcement about this year’s pigeon pin and the launch of the 2020 “Paws and Give” campaign. “Due to the global pandemic, the Ontario SPCA has increased its commitment to veterans in 2020 by donating $2.50 from each pin sold to Royal Canadian Legion branches across Ontario.”

Carrier pigeons were used in the 1914-18 conflict to transport messages between military outposts, explained Sid Giddings, president of the Georgina Military Museum in Keswick, northeast of Toronto. The birds also played an important role in the Allied bombing missions of the Second World War, he said.

“A lot of bombers would carry pigeons with them so if they went down in the sea and they survived, they would put a message into the pigeon’s message holder on its leg and set it free,” Giddings explained. “They could give an approximate position of where they were in the sea so they could be found. And a lot of people were saved this way.”

While this year’s pin highlights the contributions of pigeons, Millemen says the purpose of the pin is to honour the war contributions of all animals in war, including horses, mules, cats and dogs.

History of animals contributions in war

In the First World War, animals started off as mascots for the regiments, said Giddings. Regiments would adopt animals and bring them overseas when the units were deployed as a morale booster.

“As those animals put their faith into the people that were feeding and looking after them, they also helped those men in the fight for the war,” said Giddings. “A lot of them did some great things just out of loyalty to their masters.”

“A lot of men owe their lives to those horses.”

One such mascot was the billy goat Sergeant Bill. Bill was adopted by a regiment in Saskatchewan as the soldiers passed through the town of Broadview, Sask. The soldiers smuggled the goat on board with them to England. Bill lived with the soldiers in the trenches and suffered from shrapnel wounds and shell shock.

“His most valiant moment came when the shells were coming over close to them, you could hear them coming, and Bill butted the three men into the trench and saved them,” Giddings said. “The billy goat survived that, as well. So he saved those men and he was very affectionately loved by the men.”

The taxidermied body of Sergeant Bill is currently on display at the Broadview Historical Museum in Saskatchewan.

“A lot of men owe their lives to those horses,” Giddings said.

Animals continued to be a large part of the war effort for the duration of the First World War and throughout the Second World War, said Giddings. Horses were often used to transport troops and haul artillery.

One famous military horse was Warrior, who served with the Canadian cavalry in the First World War. He was awarded the Dickens Medal, the animal equivalent of the Victoria Cross, for his service.

He served in the front lines where he was dubbed “the horse the Germans couldn’t kill.”

Though the use of animals in the military, such as horses and pigeons, declined after the Second World War, dogs are still used in a significant capacity by the military today, according to Giddings. They sniff out mines and explosives and are part of search and rescue missions.

Dogs are at the forefront of animal participation in war because they can be skillfully trained to perform functions, explained Giddings.

Dogs are not the only animals employed by the Canadian military today. According to Animal Alliance Canada, animals such as pigs are most likely still being used for military medical training by the Department of National Defence.

According to the most recent available data from 2012, animals such as pigs were being used for virus and burn studies at Canadian Forces Base Suffield in Alberta, said Liz White, President of Animal Alliance Canada.

The procedures are often painful for the animals, said White. One study she described involved inflicting burn wounds on an animal without pain relief.

Despite the fact that there are more sophisticated approaches to medical testing available, animals are still being used, White said. For example, other NATO countries are using computerized methods for training and experiments to simulate treatment of battlefield wounds.

“Learning on these new approach models that are available, and which are being used by other countries, gives you lots of time to practice. You can do things over and over and over to a patch of simulated skin,” White added.

White has submitted multiple freedom of information requests to access the updated data on military animal use from 2016, but has not received any information, she explained. She added that this makes it difficult to take action on the issue.

“The truth of the matter is that without the information about what they’re actually doing, it’s hard to sort of say to them, ‘We think that you can go into different directions,’ because we don’t actually know exactly what they’re doing from any up-to-date information,” said White.

White said she is hoping to receive the updated information from the Department of National Defence soon so she can write an updated report and press the federal government to consider a computerized approach to training.