2 days ago 0 4 min read
We use cookies to provide a personalized experience for our users. By continuing to browse this site, you give consent for cookies to be used.
Got it!
Home > News > Ottawa > Ottawa first responders bring the heat in fundraising event for epilepsy 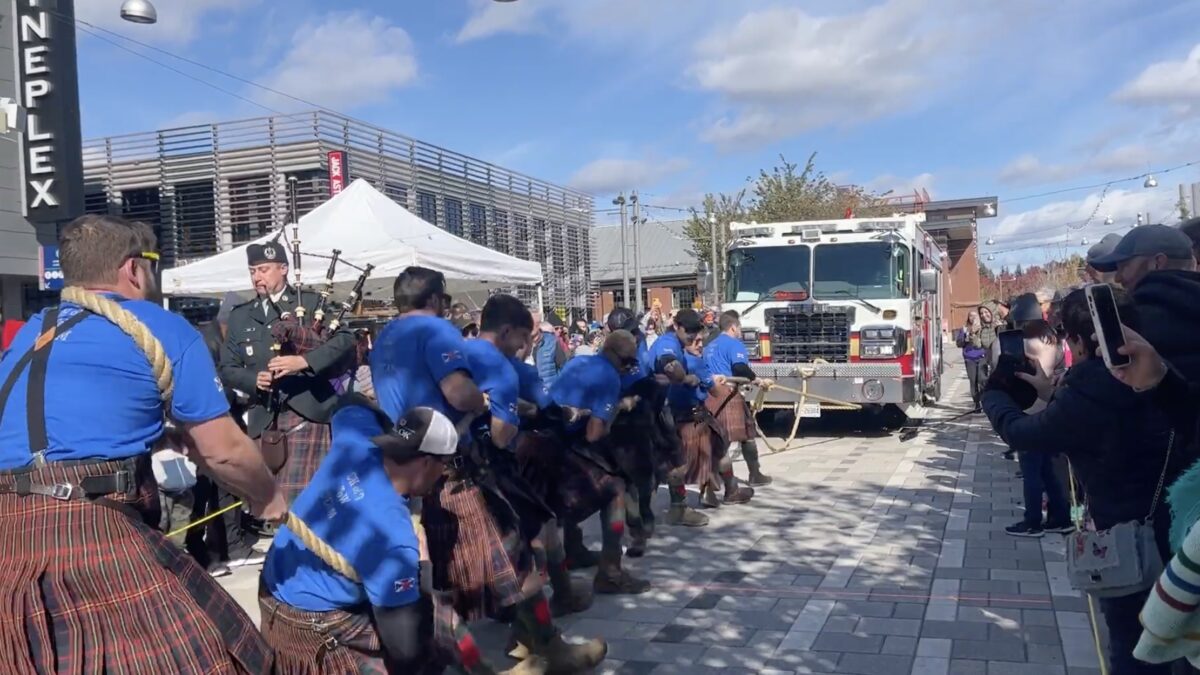 A team of kilt-wearing participants competes in the Ottawa Fire Truck Pull at Lansdowne Park. The October event, held for the first time after a three-year hiatus due to the COVID-19 pandemic, raises funds for Epilepsy Ottawa. [Photo © Ashley Hermalin]
Bridging Communities

Excitement ignited at Lansdowne Park recently sparked by the first Ottawa Fire Truck Pull since the start of the COVID-19 pandemic.

The event, a fundraiser for Epilepsy Ottawa, featured several teams of 10 participants as they tried to pull a 12-tonne firetruck, provided by Ottawa Fire Services, a distance of 100 feet (about 30 metres) using an eight-metre-long rope.

“This is our first year back, it’s extremely exciting,” said Nikki Porter, executive director of Epilepsy Ottawa. “We weren’t sure what it was going to look like. We weren’t sure if anyone was going to come back. But we’re thrilled with the turnout.”

About 400 people gathered for the Oct. 8 event. According to Porter, they weren’t sure what to expect after the three-year hiatus.

However, one team, called Team Shrek, ensured first responders across the city were recruited for the event.

Porter explained that the team is “named after one of the firefighters who went by the name Shrek, and he passed away a number of years ago. So, his colleagues enter Team Shrek and asked us to do a first responder challenge.”

The pull included the Sean “Shrek” Matheson challenge as a tribute to the late firefighter, an event that’s strictly for teams of first responders competing to record the fastest time to pull a fire truck the required distance.

Teams raise a minimum of $1,000 each to participate, but some teams raised as much as $5,000 for Epilepsy Ottawa.

The organization exists to help those with epilepsy and their caregivers navigate life with the condition, Porter explained.

“Most people, when they’re first diagnosed with epilepsy, they might get a diagnosis, a prescription and a pamphlet and they’re told ‘good luck,’” she said. “So, we’re the place that they can go and spend time with an epilepsy educator and get an understanding of what it means to live with epilepsy, what their life (or their child’s life) can look like.”

Between the two teams, they raised about $3,200 for Epilepsy Ottawa.

As the event began, the Bytowne Fire Brigade — a local heritage group that preserves historical firefighting equipment — brought one of its vintage trucks to the event and offered information about the history of fire departments in Ottawa.

The event kicked off with a pull performed by volunteers running the event. Other teams followed, each pulling the fire truck twice with a break in between as the crowd gathered close to wave signs and cheer to encourage participants.

“It feels good just to finish it — and it’s hard,” Decooman said afterward.

Some groups dressed up for the occasion, with storm troopers comprising one team, cowboys competing for another, and even a team of men in kilts with a bagpiper to help them along.

According to one member of Team KCNT Warriors, “pizza and adult beverages are the key to training.”