2 weeks ago 0 1 min read
We use cookies to provide a personalized experience for our users. By continuing to browse this site, you give consent for cookies to be used.
Got it!
Home > News > Ottawa > Ottawa residents share personal stories of ‘Freedom Convoy’ at People’s Commission hearings 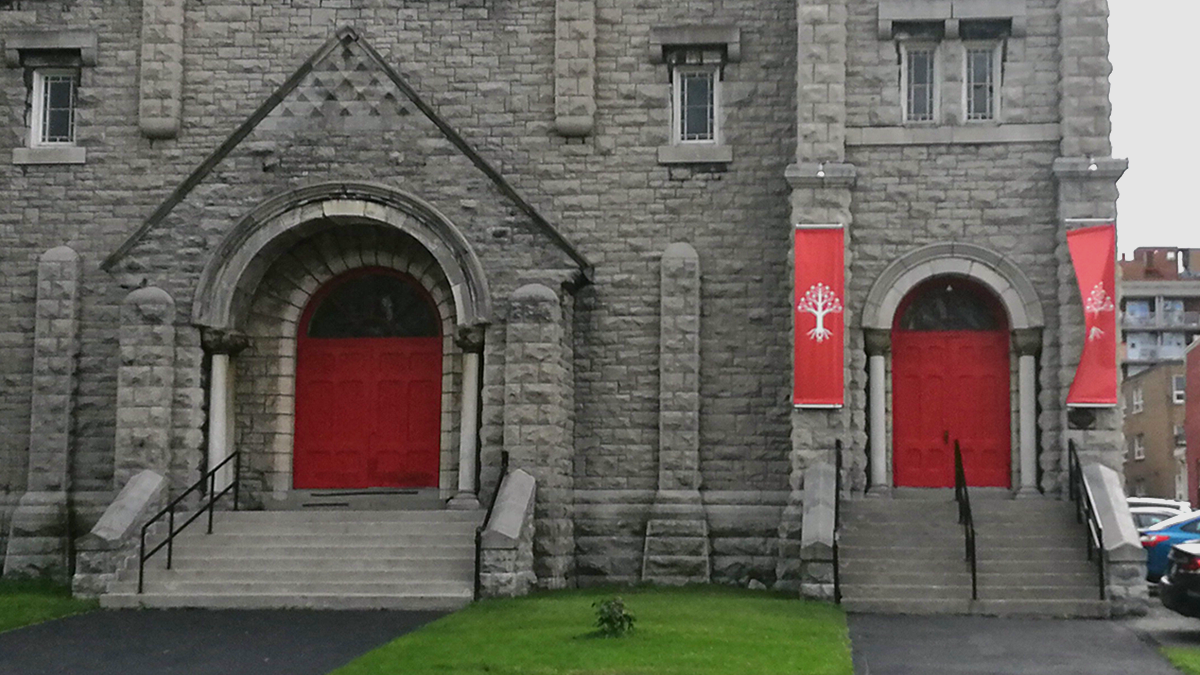 The United People of Canada began using the former St. Brigid's church in Lowertown as an "embassy" in June, but the group was eventually evicted in late September. Local residents had voiced concerns about TUPOC's links to the Freedom Convoy that occupied downtown Ottawa in January and February. [Photo © Austina Yu]
Canada Politics

Eight months on, the impacts of the “Freedom Convoy” protests still reverberate through the city.

In hearings last month, 12 Ottawa residents shared their experiences with the three-week occupation of the city in the opening set of public hearings held by the Ottawa People’s Commission on the Convoy Occupation.

Then, on Sept. 23, a judge granted an application by the owners of St. Brigid’s former church to evict The United People of Canada, a convoy-related group that had been occupying the building since June.

These developments form a backdrop for public hearings now underway that will determine whether it was necessary for the federal government to invoke the Emergencies Act to quell the occupation. Judge Paul Rouleau will hear testimony from provinces, police, politicians and the public. The Rouleau Commission will also review thousands of documents over the next six weeks.

Throughout late January, vehicle convoys began heading to Ottawa from across the country to protest vaccine mandates and the federal government. This led to an occupation of the city that lasted from Jan. 29 to Feb. 21, by which date police had cleared trucks and protestors from the downtown area.

At a Sept. 21 public hearing, one Centretown resident who identified himself as Matt shared what it was like to be a counter-protestor in the first few days of the occupation. Speakers were allowed to remain anonymous for safety reasons.

“Violence was always very close by. The sense of fear and lack of safety was always at hand,” Matt said.

“While counterprotesting, I experienced a crowd of people surround me, intimidate me, block my path, cover my sign with their own flags, stare me down with anger, yell at my face with no mask, blow smoke in my face, truck horns blaring constantly right in front of me, among other things.”

The immediate effects of the “Freedom Convoy” were felt throughout Centretown.

One 72 year old retiree explained how her daily activities were disrupted for more than a week: not being able to sleep, hearing loud music and yelling throughout the night, ordering groceries online to avoid going outside and not being able to walk her dog.

“I know what protests are. And I know what violent insurrections are,” she said. “This is the first time in my entire life I am ashamed of Canadians — not ashamed to be Canadian, but ashamed of any of my fellow Canadians.”

In the months after the occupation ended, The United People of Canada began using St. Brigid’s, a former church on St. Patrick Street in Lowertown, as an “embassy” for their organization. Various news stories highlighted TUPOC’s connection to convoy organizers and supporters, but TUPOC officials repeatedly denied that claim.

The website domain tupoc.ca was registered on March 8, 2022. Around that time, TUPOC representatives began touring St. Brigid’s, according to court documents.

On Aug. 17, TUPOC was evicted from the property — but continued to occupy it. As recently as Sept. 18, TUPOC had posted on its website that supporters were hosting a “Community Weekly BBQ” at St. Brigid’s.

Less than a week later, Justice Sally Gomery ruled that the eviction was valid, and TUPOC owed $53,000 to the owners of the property.

Moving forward as a community

The occupation of St. Brigid’s may have been resolved, but the occupation is still a difficult topic for many Ottawa residents who feel a lack of closure about the disruptions they faced.

Gaëlle Muderi, the project co-ordinator for the Ottawa People’s Commission, said the initial public hearings last month provided an avenue for many people to express their concerns and feel that their experiences were being acknowledged.

‘It was quite a courageous step for people to be willing to step up and, and speak out in that context, because as we know, this is difficult space. There’s a lot of targeting of people, especially when people have been critical of the the convoy itself.’

“They felt like that space hadn’t yet been created, and that it’s been several months since the since the occupation took place,” she said. “They had expected there to be some kind of reckoning of the aftermath. And that hadn’t happened yet, at least not in that in the city’s capacity.”

The Ottawa Auditor General is preparing a report on the city’s and police service’s response to the convoy. On its website, the office says it received 1,600 responses to its survey, which is “among the highest response rates for a City of Ottawa survey.”

Alex Neve, one of the commissioners for OPC, said the other official inquiries led by the city auditor and Ontario Court of Appeal Justice Paul Rouleau do not capture the full extent of the convoy’s impact on the community.

“The question about ‘What was the impact on the very diverse community, throughout the red zone, that had to live this on a daily basis?’ is not a big part of their mandate,” he said.

Neve said the OPC will release a report in February. In the meantime, they will be holding more community events to gain a fuller understanding of residents’ stories.

“It was quite a courageous step for people to be willing to step up and, and speak out in that context, because as we know, this is difficult space,” he said. “There’s a lot of targeting of people, especially when people have been critical of the the convoy itself.”

Muderi emphasized that the OPC is interested in hearing from any Ottawa residents, regardless of their perspective.

“There has been somewhat the perception that we are not open to everyone speaking and that we’re cherry-picking our speakers to enforce a certain viewpoint. That’s definitely not what’s happening,” she said.

“If anyone has a lived experience of the convoy occupation, whether it’s from living downtown, working there, regularly passing through, we want to hear from them.”