6 days ago 0 3 min read
We use cookies to provide a personalized experience for our users. By continuing to browse this site, you give consent for cookies to be used.
Got it!
Home > News > Environment > Ottawa Riverkeeper, museum scientists probe life-cycle link between lake sturgeon, endangered mussel 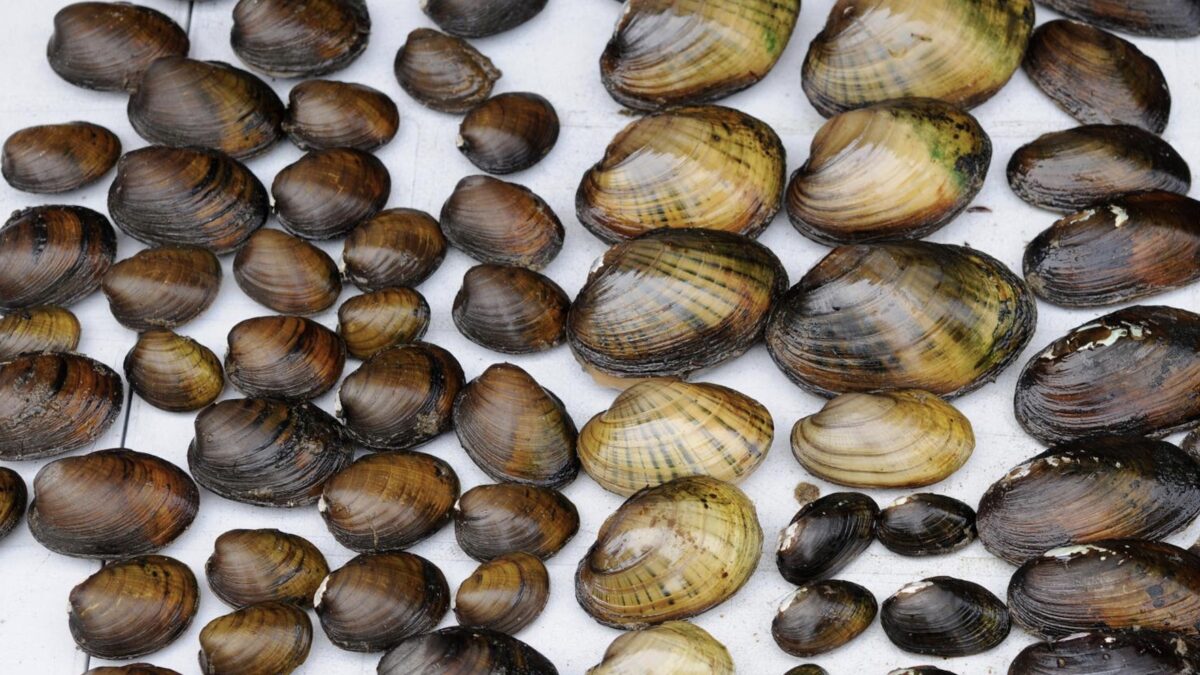 Live freshwater mussels collected from the Ottawa River. Specimens of the threatened Hickorynut mussel, which is striped and brownish in colour, are grouped on the left hand side of the photograph. [Photo © André Martel]
Environment

Scientists are probing the depths of the Ottawa River to solve a mystery about the crucial relationship between an endangered species of mussel and a giant, ancient fish.

The river is home to the Hickorynut mussel, which was officially designated an endangered species in Canada in August 2019.

In hopes of raising awareness of the threatened species and to better understanding its life cycle, the Ottawa Riverkeeper organization undertook a project in 2019 with Dr. André Martel, a biologist from the Canadian Museum of Nature.

The Riverkeeper, an advocacy group dedicated to the protection of the Ottawa River watershed, is supporting an investigation into the presence of the Hickorynut and its host fish, the iconic lake sturgeon.

The Riverkeeper researchers have participated in multiple dives with Martel and his team, specifically in the Lac Coulonge reach of the river near Pembroke.

Katy Alambo, a Riverkeeper biologist who works on the organization’s biodiversity and endangered species files, said Hickorynut mussels prefer deeper waters with with a sandy riverbed so the mussels can bury themselves in it.

“I do not know of any other place in the country where you go diving and within 25-30 minutes, you collect a bag of (Hickorynut mussels),” said Martel.

Like every other freshwater mussel, the Hickorynut needs a host fish to help with their growth. Alambo explained that the mussels produce larvae, a tiny, immature form of the species, which attach themselves to the gills of their host fish. From the gills, the larvae get nutrients to grow before detaching from the fish once the maturing mussel is capable of collecting its own food.

The fish that the Hickorynut depends on is almost certainly the lake sturgeon, scientists believe. They are the biggest freshwater fish in Canada, reaching two metres in length and topping 180 kilograms. They are “kind of like dinosaur fish. They live to be 100 years old — so they are a really cool species,” said Martel.

Although the link is extremely likely, the life-cycle connection between Hickorynut mussels and the Lake Sturgeon has yet to be confirmed. This is where Martel and his team comes in, in collaboration with renowned Canadian diver Jill Heinerth.

Martel said the Hickorynut is always found in rivers that also have lake sturgeon. The lake sturgeon is a migratory fish that stays within the river, and does not reach the ocean.

This means that it “needs freedom, it needs free roaming areas,” said Martel.

The sturgeon migrates upstream to spawn, and then moves downstream for the rest of the year. A bottom feeder, it mainly eats snails and clams found on the riverbed.

But with the construction of dams, poor water quality in some areas, and harvesting over the years, the lake sturgeon has become a species at risk in Ontario, according to a provincial government website.

“I think any reduction in those species can have cascading effects. You never know what can happen down the road.”

Despite this, lake sturgeon populations are “doing particularly well” in the Lac Coulonge reach of the Ottawa River, said Martel. This is also where Riverkeeper researchers and Martel have gone on multiple expeditions to observe the Hickorynut mussel, where they discovered large populations of the species.

Martel’s team is aiming is to confirm the connection between the two species, and they have already achieved a lot of progress. They have succeeded in discovering mussel larvae on the gills of a live, wild lake sturgeon — a powerful clue.

Martel said the find is “our first detection ever of freshwater mussel larvae attached to the gills of this fish.”

The discovery and the ongoing research will help build a plan for the protection of the endangered Hickorynut.

Why is this mussel so important? “As soon as there is an animal in the ecosystem, it serves a purpose,” said Alambo, adding that mussels are good ecological indicators of changes in an ecosystem.

Alambo added that mussels have the ability to improve the water quality of the river by filtering toxins from the water.

“I think any reduction in those species can have cascading effects,” she said. “You never know what can happen down the road.”

Mussels are beneficial to the river, but they can also be beneficial in teaching us a lesson about interconnectedness. Heinerth said COVID-19 has shown everyone that “humanity is connected. We cannot ignore things occurring on the other side of the planet and think that they will not affect us.”

She added: “Now that we have shared this profound experience, we can hardly look away from global water issues without recognizing that damage to the environment, even on the far side of the earth, could affect our natural resources, health and survival here.”