1 week ago 0 1 min read
We use cookies to provide a personalized experience for our users. By continuing to browse this site, you give consent for cookies to be used.
Got it!
Home > News > Police > Police making progress on better relations with minority communities, says equity council member 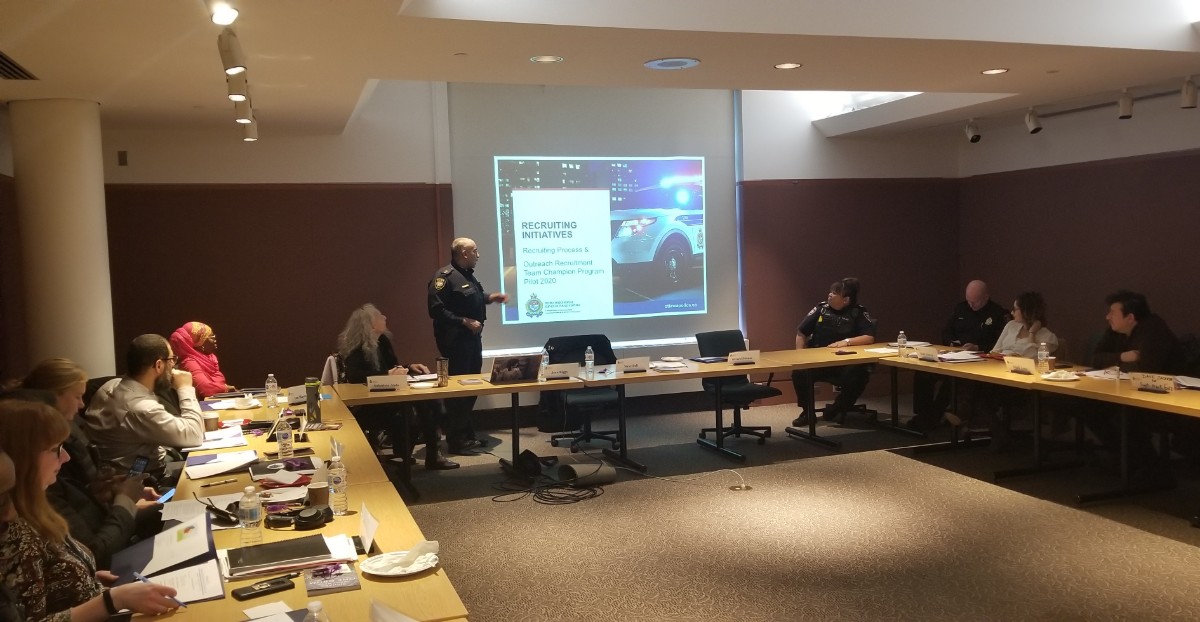 Ottawa Police Service senior officers John Mbakulo and Maria Keen of the force's Outreach and Recruitment Team give a presentation on police recruitment initiatives to the Community Equity Council, which is mandated to study and improve relations between police and Ottawa's many Indigenous, faith-based and racialized communities or organizations. [Photo courtesy the Community Equity Council]
Community

Although the Ottawa Police Service is investigating the internal circulation of what Chief Peter Sloly has called a “disgusting, racist meme,” the co-chair of the OPS’s Community Equity Council recently highlighted progress towards a more diverse and inclusive force.

The CEC was created in January 2019 and in the meantime new commitments to Ottawa’s racialzied communities have been created and will soon be put in motion.

The CEC is made up of senior police and a dozen community members who represent visible minority and faith-based communities. It launched to improve a relationship marked by troubling events and low levels of trust for years.

The death of Abdirahman Abdi, a black man living in Hintonburg, following a violent arrest in July 2016 led to the ongoing trial of the arresting officer and sparked calls for action for improved relations.

A human rights case triggered by a 2017 complaint from OPS Insp. Samir Bhatnagar — who had alleged that he was denied a promotion because he was a “brown-skinned man of East Indian origin” — was only withdrawn in September 2019 after hearings that aired accusations of racist attitudes within the OPS.

Despite this history, Sahada Alolo, co-chair of the CEC and a leader of the African Canadian Association of Ottawa, said recently that she is feeling positive about the push for concrete action.

“I’m hoping that when this model becomes very successful in the long term, this is a model that can be emulated throughout the country, if not around the world,” Alolo told Capital Current before to the latest controversy over the meme.

Like many well-intentioned efforts to reform institutions, the CEC makes recommendations based on reports and input from stakeholders. Unlike some, however, this data gathering was quickly distilled into a list of 10 things to accomplish in 2020 in a blueprint for change titled the Equity, Diversity and Inclusion Multi-year Action Plan.

Some items are completed, said Alolo, including the creation of an office to co-ordinate implementation of the plan and the reintroduction of a hate crime unit, following an increase in reported incidents. In 2018, Ottawa was one of Canada’s worst places for hate crimes with 105 reports of incidents targeting Black, Jewish and Muslim communities.

Many upcoming items in the action plan focus on changes within the police service. Alolo said there’s been a recognition that police need to “clean their own house” to improve the relationship with the wider community.

Recruitment and background checks are changing after a finding that the previous process tended to stop racialized people from even getting in the door. Alolo also said that it’s “people who know people — often white people — who are able to get ahead,” so new policies have been introduced to make promotions fairer.

The plan includes new training to prevent racial profiling, providing more coaching and mentoring on diversity and inclusion, and enhancing relations through community policing — an approach in which beat officers develop closer relationships with the communities they serve.

At a forum in December 2019, where the plan was being discussed, Sloly said there needs to be an emphasis on the joint effort of the community and OPS to address the protection and promotion of human rights.

He added that policing is not just an issue that OPS should tackle by itself, but that difficult conversations need to happen to bring about action that reflects what the community wants to see.

“There is a joint commitment to this.  The public and the service working together to advance policing in this city,” he said when addressing the forum.

The CEC took over as the OPS’ community consultation group after the previous Community and Police Action Committee was disbanded in 2018.  A main concern at the time the group dispersed was that the city’s police service was not well equipped to deal with the diverse groups in the city.

The CEC was formed to shift the culture of the OPS so it has the tools and training to serve and interact with Indigenous, racialized, and faith-based communities in Ottawa.  In addition to this, the council members are striving to bring about changes that would make the OPS a more equitable workplace for the community to rely on.

The CEC is made up of 12 community members representing the Indigenous, Muslim, Somali, Haitian, Middle Eastern and Black communities in Ottawa. Nine OPS members also sit on the council, all senior leaders on the force.

The relationship between the OPS and racialized communities came under intense scrutiny after the death of Abdi, a Somali-Canadian, as he was arrested in connection to an alleged sexual assault a coffee shop. The trial of Const. Daniel Montsion, charged with manslaughter, aggravated assault and assault with a weapon in relation to Abdi’s death, had been scheduled to resume in late April before the COVID-19 pandemic disrupted court hearings in Ottawa.

Abdi, who had mental health issues, died outside of his Hintonburg home after a confrontation with two OPS officers. Soon after, hundreds of Ottawa residents protested what they viewed as Abdi’s unjust death and the violence they saw in the relationship between police and visible minorities.

At the same time, some police officers wore blue and black wristbands to show their solidarity with Montsion, a gesture that caused more tension between police and the communities they serve.

A group called the ‘Justice for Abdirahman Coalition’ was created following the tragedy to push for changes within the OPS. The coalition is still active in advocating for greater transparency, to challenge inequity and to create social change in Ontario.

The rift between police and racialized communities later prompted the OPS to create the CEC to examine the organization’s culture and practices and to determine where more can be done to address these issues.

In 2017, the OPS’ Outreach Liaison Team released a report that researched the ways police interacted with certain communities. The study was conducted as a response to the death of Abdi.

The recommendations suggested creating a team to work and maintain community relations and identify issues, reviewing the police activity in the service’s Diversity and Race Relations and Community Development areas to ensure efficient and effective responses, and reviewing the Critical Incident/Critical Situations mandate.

“The Community must feel that they have a voice within our police service. More importantly, the Ottawa Police Service needs the support of the community to successfully perform its core functions and solidify its legitimacy,” said the report.

Although this is a slight reduction from traffic stop statistics seen in the previous years, the rates were still disproportionately higher than expected based on the number of people in these populations who are actually drivers, according to the report.

The report stated that police recognize mistakes have been made in the past, and that the force has pledged to address these issues and rebuild trust with Ottawa communities.

“Some of our leadership decisions and traditional policing practices have actually put our officers in difficult positions with some communities who feel under or over policed,” said the report.

“As protectors of public safety, police must actively stand against discrimination in all its forms,” the report states.

Officers have also committed to holding “listening circles” with visible minority and faith-based groups in Ottawa who have low levels of trust in the police. In the circles, community members share negative experiences with the police and offer their concerns and suggestions for how the OPS can improve their work in those communities.

Alolo says the listening circles can be very tense — “so tense that you could drop a needle in the middle of a room and hear the sound.

“They (police representatives) may not be the perpetrators of what the community members are describing, but to know that they are wearing a uniform that represents the negative experiences of what people go through is just heart-wrenching and uncomfortable, but those are conversations that the police need to hear,” said Alolo.

Community members have heard from police, such as school resource officers and frontline officers, to hear their experiences. Alolo said that session “was a big eye opener” and a reminder that there are real people on both sides of the troubled relationship between police and Ottawa communities, who “all want to make our city better.”

Not only have the listening circles improved understanding, Alolo says, but a benefit of having senior police members on the council is the ability to implement changes more quickly.

During one listening session, it was pointed out that at one point on the OPS’s web page about Ottawa’s “most wanted” crime suspects, only black people were listed — even though people of other races were also being sought for various alleged crimes.

“It goes to portray the stereotypes against black people — that they are criminals, disproportionately showcasing them … as if that is the only race that commits crimes. It’s just so wrong,” said Alolo.

After finding no legitimate reason for the skewed selection of the “most wanted” suspects, the practice was swiftly changed.

More listening circles with Muslim, Indigenous, and black youth community members are planned, said Alolo, although the original timeline for these consultations has changed due to the pandemic.

Although Sloly has said he is determined to improve the culture of the Ottawa Police Service and Alolo said she is optimistic changes can be made, building a healthy, diverse police service that’s trusted by the community will not be easy. The latest controversy surrounding the “disgusting, racist meme,” as Sloly put it, only underscores how much work remains to be done.