2 weeks ago 0 9 min read
We use cookies to provide a personalized experience for our users. By continuing to browse this site, you give consent for cookies to be used.
Got it!
Home > News > Social Issues > Rise in reported hate crimes prompts Ottawa police to revive specialized unit 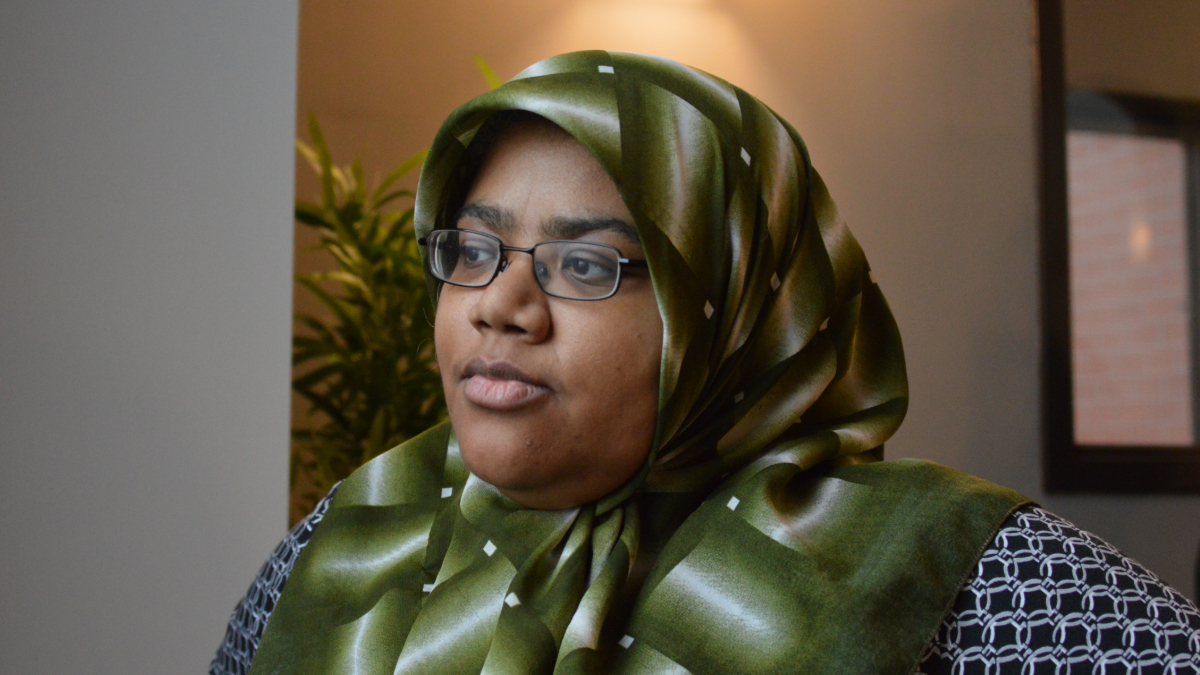 Chelby Daigle is one of the many Ottawa residents who found herself as a victim of what appears to have been a hate crime. [Photo © Lisa Xu]
Community

When Chelby Daigle was on her way to grab a coffee from Starbucks in Ottawa’s west end in February 2019, the Muslim woman heard the sound of a loud, truck engine revving nearby.

Moments later, she was hit by the vehicle. Daigle was not physically injured but the incident left her in shock. Adding to her disbelief of what had just happened, the white driver and his passenger then made a rude gesture.

Just crossing the street had turned her into a victim of what she believed to be a hate-motivated incident, which she reported to the Ottawa Police Service.

“It was really scary that these two big men and a truck just seem so confident with what they’d done,” recalled Daigle, who wears a hijab. “I eventually entered the Starbucks and then I thought I could kind of keep it together. But then I just started crying … it’s very scary because you just don’t know how far people will go.”

In response to an increase in reported hate-motivated incidents such as this one and local citizens expressing concern about rising racism in the city, the Ottawa Police Service is reintroducing a unit to investigate hate crimes and revamping its online reporting system for such incidents. The aim is to improve police response to incidents and provide accessible resources for citizens to file a report when they have seen or been a victim of an incident.

“We see not only here in Ottawa, but globally, I would say, a rise in hate-motivated incidents. We see that across Canada,” said OPS Deputy Chief Uday Jaswal. “To meet the needs of our community, we felt that a centralized crime section was what was required.”

Ottawa Police Chief Peter Sloly noted in the OPS press release that two new investigators are to be assigned to the unit and will be responsible for monitoring and triaging reported hate-motivated incidents.

“As a result of community and stakeholder feedback, we’re adding two new Hate Crime investigators to the Security Intelligence Section to help identify trends and community safety concerns,” Sloly said in the statement. “We re-evaluated how we accepted hate-motivated incidents from the public and we know that responding to incidents of hate will have a far-reaching impact on the well-being of our communities.”

OPS has been active in the area of hate crimes since the early 1990s. In 1991 and 1992, the City of Ottawa and the Ottawa Police Services Board met with members of LGBTQ community to address concerns about their safety following the 1989 murder of Alain Brosseau, who was thrown over the Alexandra Bridge by attackers who thought he was gay.

In 1993, the Ottawa Police Service was the first in Canada to form a unit focusing on hate crimes to improve hate-crime prevention and community-based policing for communities affected by hate crime, particularly the black, Jewish and LGBTQ communities. The number of reported incidents rose to 211 in 1994 from 176 in 1993.

In a recent interview with CTV News Ottawa, Sloly said that over time, resources moved away from the department for “a number of reasons.” In 2017, OPS divided its three approaches to hate crime — intelligence gathering, investigative, and community outreach — into two units.

Although the parts were designed well, a more centralized unit is now needed to meet the community’s needs, said Jaswal.

“We didn’t have the centralized coordination that was required to ensure that we were effective and consistent in the way that we were responding to hate-motivated incidents,” he said.

Concern about being the victim of a hate-motivated incident is not uncommon for individuals living in Ottawa. Statistics Canada shows the capital ranked third in the country for reported hate crimes in 2018.

In recent weeks, for example, two public spaces were targets of hate-fuelled vandalism — an Indigenous painting at Algonquin College was damaged with yellow paint and the National Holocaust Monument on LeBreton Flats was also defaced — just days after the 75th anniversary of the liberation of the Auschwitz death camp — when an egg was smeared across the surface.

What is a hate crime?

Beyond individual attacks, directing hateful messages to a community is also considered to be an example of hate-related incidents, according to Amira Elghawaby, a well-known advocate for the Muslim-Canadian community and board member at the Canadian Anti-Hate Network.

“Hate crimes are often considered message crimes. So it goes beyond…any one individual or any one building or monument. It’s about sending a message to an entire community,” said Elghawaby.

According to Barbara Perry, the director of the Centre on Hate, Bias and Extremism at Ontario Tech University in Oshawa, some of the most frequently targeted groups today are the black, Jewish, Muslim and LGBTQ communities.

However, not every hate-motivated incident constitutes as an offence under the criminal code, making it difficult for police to charge individuals with hate crimes, said Omer.

Ottawa hate crimes by the numbers

Members of local community organizations were invited to a meeting with Sloly, the first black person to be Ottawa’s police chief, when he announced the changes to hate-crime policing on Jan. 23. Sameha Omer, director of legal affairs at National Council of Canadian Muslims, was one of the attendees.

Omer said OPS’ Hate Crime Section is a positive step that is much needed because it helps ensure that there’s proper follow-up from the police.

During the meeting, said Jaswal, a member of the black community talked about how he doesn’t report the multiple times he’s been the recipient of racist commentary because “that’s sort of the norms of their lived experience.”

Perry also noted that some “affected individuals and communities don’t report because they might fear retaliation.”

Working towards a hate-free city

Going forward, Jaswal said he hopes to see the OPS provide better services to the public by improving relationships with communities that are impacted by hate.

“I think people need to have trust and confidence that when they report something to the police service, that we’re going to take that complaint seriously (and) that we’re going to do our due diligence in terms of investigating and following up appropriately,” said Jaswal.

Jaswal added that it’s important for police to understand their obligations in terms of investigating and follow-up as well as to consider the impact of hate on individuals.

Omer said she hopes the police are able to provide feedback to individuals who report incidents so they’re kept in the loop.

“You don’t want to do the reporting and it kind of falls off the grid and you don’t hear back from them,” she said.

That’s what happened to Daigle when she eventually reported the incident outside the coffee shop last winter. The police didn’t follow up with her and she didn’t find out her case was closed until a few months after the fact.

She said she hopes this new Hate Crime Section will be more proactive in helping communities at risk.

“Ultimately, at the end of the day,” said Daigle, “the most vulnerable were often the ones going to be attacked and targeted. So what are you doing to reach out to those people?

“You have to actually directly engage with people to see what’s going on.”