1 week ago 0 1 min read
We use cookies to provide a personalized experience for our users. By continuing to browse this site, you give consent for cookies to be used.
Got it!
Home > News > Ottawa > Stately Victorian-era Sandy Hill home to be designated a heritage landmark 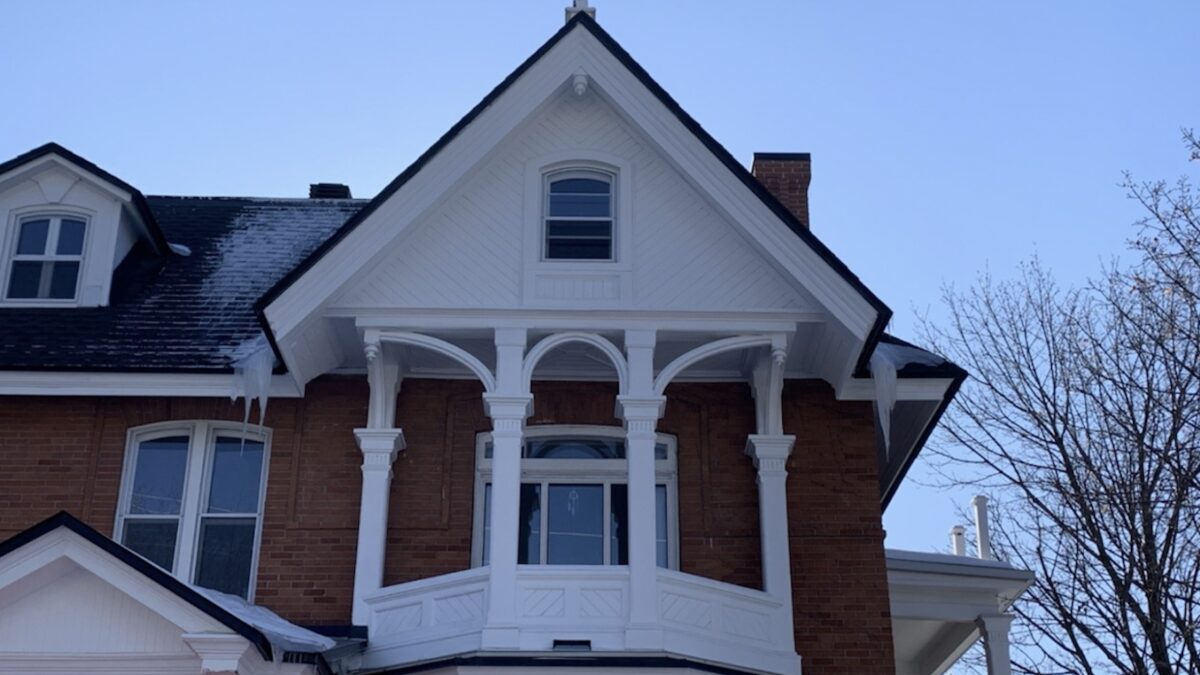 Robert Law House, located at the corner of King Edward Avenue and Laurier Avenue East, is set to be designated a heritage landmark by the City of Ottawa. The home's upper-floor balcony is one of its most distinctive design attributes. The 19th-century building was home to Dr. Robert Law, the city's chief medical officer of health at the outset of the Spanish Flu pandemic in 1919. [Photo © Bobby Eros]
Community

The City of Ottawa is formally designating a high-profile, Victorian-era house in Sandy Hill as a heritage landmark.

A century ago, the stately home at the southeast corner of Laurier Avenue East and King Edward Avenue was owned by Dr. Robert Law, an Ottawa physician and chief medical officer of health who helped guide the city through the Spanish Flu pandemic after the First World War. Today the home is owned by uOttawa.

As the city’s built heritage sub-committee and city council recently considered the proposed heritage designation for Robert Law House, Ottawa was in the grip of another pandemic and its downtown core was occupied by the trucker convoy protesting vaccine mandates.

Built in 1886, the two-and-a-half storey brick building is undergoing repairs to its stone work commissioned by the university, which uses the house as an administrative office. The company carrying out the work, M.H. Stoneworks, has extensive experience restoring culturally significant buildings, including the Peace Tower and St. Patrick’s Basilica.

“The building is a landmark in the area and a gateway to the broader University of Ottawa campus.”

An employee of M.H. Stoneworks, who was working at the site, says that the repairs are foundational in nature and “don’t require any specialty materials, just specialty integration.”

A lengthy report by city staff that recommended the heritage designation for Robert Law House was approved by the built heritage sub-committee in early February and on Feb. 23 by full city council. Other steps, including further consultations with the university, need to occur before the designation is formalized.

“Despite the changes that have occurred over time to the neighbourhood and to the use of the building itself from a residential to office use, the Dr. Robert Law House remains one of the last original buildings in this area and its form and integrity remain largely intact,” the report states. “Its architectural style and associated attributes, lot size and layout and generous setbacks contribute to its role as a 19th-century residence in reinforcing the historic character of the area. The building is a landmark in the area and a gateway to the broader University of Ottawa campus.”

Ottawa architecture student Rebecca Hill-Lamoureux said she’s grateful that a building as iconic as this one is gaining attention for its heritage value. In terms of uOttawa’s current use of the property, “I feel like you could do a lot better than an office space,” she said, adding that that the building’s uniquely shaped windows and brick patterning are particularly impressive.

The proposal was submitted under the direction of the city’s heritage and urban design services manager Kevin Lamer.

The three criteria on which a building is judged for heritage status are: historical value, design or architectural value and contextual value. Lamer argued in the report that Robert Law House qualifies on all three counts, with Law’s own historical significance a key factor.

“He advocated strongly for the provision of clean and safe drinking water in Ottawa, vaccination against contagious diseases and resources for public health units, and was often met with fierce public and political opposition,” said the staff report. “Dr. Law is credited with assisting in bringing an end to Ottawa’s typhoid epidemics in 1917, by which time typhoid cases and deaths in Ottawa had decreased dramatically. Not long after, in 1918, Dr. Law would become responsible for devising the City’s response to the Spanish influenza pandemic.”

The house’s balcony is a significant feature with its unique design and placement above the building’s wide bay window. The pillars that hold the balcony up are intricately carved and add to the visual appeal and heritage value of the home.

The building is described as a cornerstone of the neighbourhood. It was the first to be built on the city block, and its style inspired surrounding buildings. The fire station across the street is made from the same type of brick, as is an apartment building two doors down.

The home was briefly facing a wrecking ball in the 1960s as part of plan to widen King Edward Avenue into an expressway, but “was saved from demolition due to rising costs and community opposition.”

The house is a “representative example of the Queen Anne Revival style, which was popular in Canada in the late 19th century and frequently used for homes for the wealthy upper middle class,” said the city report. “It has been well-maintained and appears to have retained a high level of integrity. While the use of the building has changed over time, the exterior of the building appears to be largely unaltered.”