3 weeks ago 0 4 min read
We use cookies to provide a personalized experience for our users. By continuing to browse this site, you give consent for cookies to be used.
Got it!
Home > News > Ottawa > Pysanka for Peace: Ottawa Ukrainians share traditional egg artistry to raise funds for embattled homeland 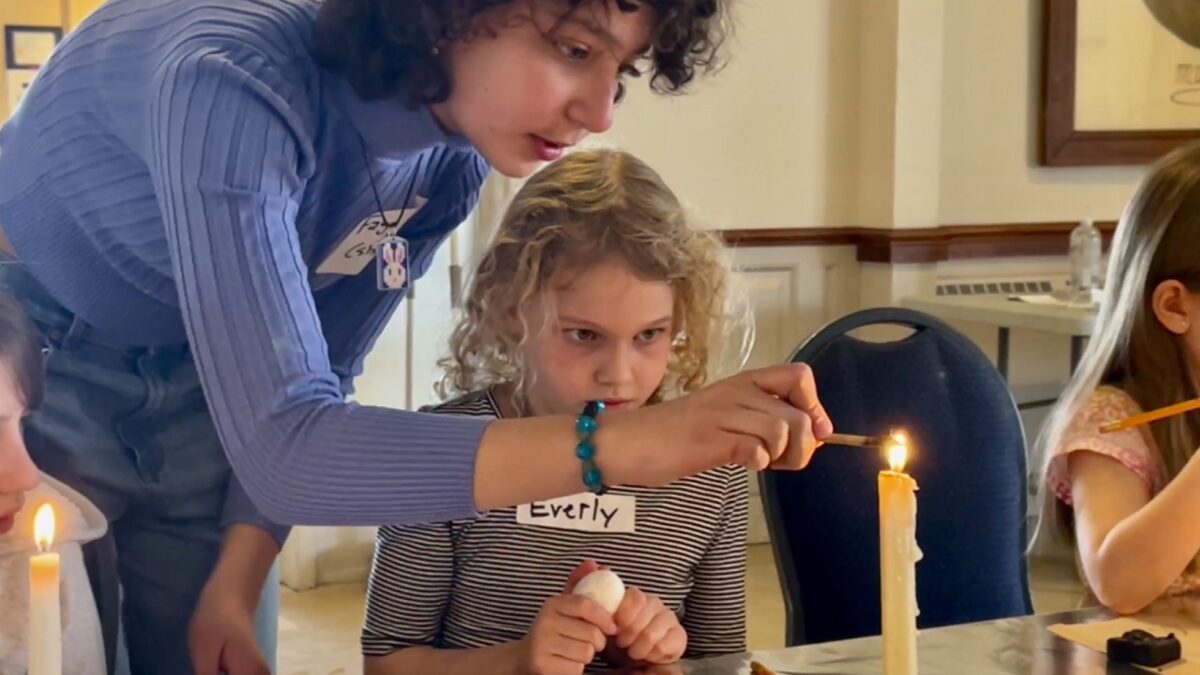 Candles are used to melt wax as part of the process to decorate eggs. The pysanka egg-decorating workshop in Ottawa was hosted by the local branch of the Ukrainian Women's Association of Canada to support relief efforts in the wake of the Russia-Ukraine war. [Photo © Ashley Hermalin]
Arts & Culture

While Russia’s brutal invasion of Ukraine continues, members of Ottawa’s Ukrainian community are hosting workshops and raising funds for their embattled homeland by creating traditional pysanka eggs for the spring.

The Ottawa branch of the Ukrainian Women’s Association of Canada organized the workshops to raise money for the Canada-Ukraine Foundation’s humanitarian aid effort for those suffering and displaced. More than three million people have fled Ukraine since Russia’s widely condemned war began on Feb. 24.

Egg-decorating workshops for children ages 8-15 took place at the Ukrainian Orthodox Cathedral in Ottawa’s Carlingwood neighbourhood on March 16-18,  with more get-togethers planned for the whole family on March 19 and 20.

Workshop leader Nataliya Chabanyuk says creating pysanka — which involves the use of hot wax and colourful dyes to create intricate designs — is a tradition that’s “art, prayer and meditation all in one.”

She added that the focus is on the “designs on the egg — and they are usually raw egg because it symbolizes the life inside.”

Tamara Rudenko, a member of the women’s association and the church congregation, greeted parents and ushered them to stay and have coffee while their children took part in the craft workshop.

“The “Pysanka for Peace” campaign is to allow people to participate in an activity that may give them some hope and some joy and at the same time we’ll support through the fees we get, and 100 per cent of the proceeds are going to Ukraine,” she said.

Chabanyuk says she learned the artistry of pysanka “when I was a kid. I come from western Ukraine — it was a tradition that we were doing.”

As she led the children’s workshop, she had help from her two children, as well as some friends who served as volunteers.

“They know how to use the fire extinguisher,” Chabanyuk joked, explaining that participants would be using real flames as part of the egg-decorating process.

“The principle is that you take hot wax, beeswax and you seal the colour that you want on your egg under this wax,” Chabanyuk said. “All of a sudden, you become very still, quiet, and careful around that, so the whole situation makes you quiet and go kind of inside of yourself . . . It’s like the whole world stops around you. It’s very still — and for me, it’s meditation.”

“The principle is that you take hot wax, beeswax and you seal the colour that you want on your egg under this wax. All of a sudden, you become very still, quiet, and careful around that, so the whole situation makes you quiet and go kind of inside of yourself . . . It’s like the whole world stops around you. It’s very still — and for me, it’s meditation.”

Katia Abramavitch-Chabanyuk, Chabanyuk’s 12 year old daughter, circled around the room; speaking to the attendees about their designs, helping them learn how to use the tools and instructing them that, “once you’re done with the wax on your egg, come find us and we’ll put it in the dye.”

“I learned from my mom, since I was four,” said Katia. She explained that her designs initially were mostly dots and scribbles, but that she’s learned how to create more complex patterns since then.

Rudenko said the organization is also selling kits to take home to teach pysanka, as well as pierogi kits to raise further funds. A traditional Ukrainian dish, pierogis are small, fried-dough dumplings often filled with potato, cheese or other foods.

“We are considering new sessions and if we have space availability, we’ll be able to do that,” she said. “So it’s a pretty serious initiative, and we’re very, very thankful to the generosity and the support that the Ottawa community has given us. It’s been really special.”

Natasha Sass brought her daughter to the event.

“We (came to) support what was going on with the war, and it’s just something that’s also comforting, too,” she said. “With (COVID-19) and this war, it’s been a stressful time. This is a great way to bring people together for a common good.”

Elsewhere in Ottawa, support for Ukraine continues to flow. Local residents have been gathering regularly outside the Ukrainian embassy on Somerset Street West in Centretown to show support for the country’s resistance against the illegal Russian invasion.

Meanwhile, the Carleton Ukrainian Students’ Club is also selling pierogi kits, with a Facebook Live event scheduled for March 26 to teach participants how to make pierogis themselves.

“It’s incredibly difficult,” said Frances Reid, an eleven-year-old workshop participant, as she worked on her pysanka egg. Her inspiration? Clouds.

Christina and Soliana Kiflé, 13 and 11, shared a table with Frances and agreed egg-decorating craft is hard. After the eggs had gone through multiple dye processes, Christina became the designated wax remover for the group.

Chabanyuk said the painstaking work of decorating pysanka eggs is perfect for the “very difficult time” people are experiencing amid the Russia-Ukraine war.

“You need to go inside of you and find some answers to any questions,” Chabanyuk said. “It’s a very beautiful tradition … I really advise you to try it.”