2 days ago 0 2 min read
We use cookies to provide a personalized experience for our users. By continuing to browse this site, you give consent for cookies to be used.
Got it!
Home > Health > Seniors > Quebec’s long-term care COVID-19 crisis: ‘Unless you talk about it … it’s never going to be resolved’ 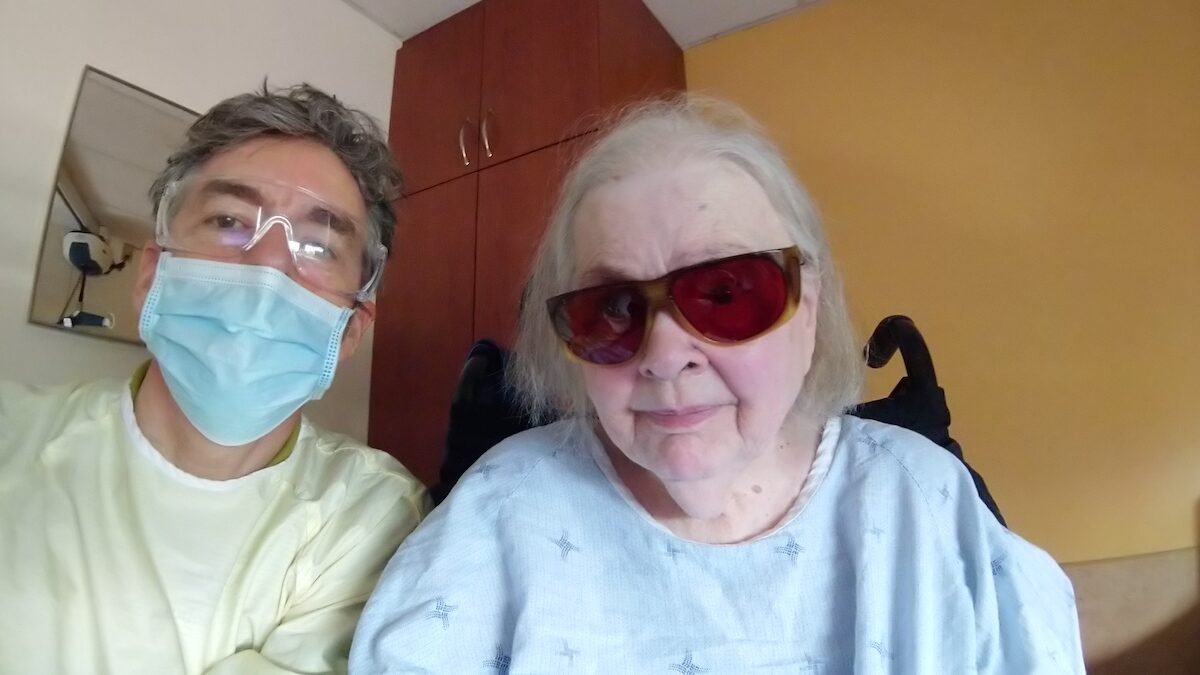 Quebec’s long-term care COVID-19 crisis: ‘Unless you talk about it … it’s never going to be resolved’

On a Monday night in May 2020, Gilles Goulet walked into the Jean-De La Lande long term care home in Montreal for his first shift as a patient care assistant.

The retired social worker donned a gown, visor and mask and made his way up to the third floor where his mother, Jeanne Leblond lives. She recognized his shoulders and voice and was relieved to see her son in what had become an extremely isolating and horrifying environment.

Before their reunification, Goulet said he had been separated from his mom starting March 14, when the province “locked down” long-term care homes known as CHSLDs. The province was dealing with hundreds, then thousands, of infections and deaths from COVID-19 in the homes.

Pre-pandemic, Leblond, who has Alzheimer’s, hearing and vision loss, would see her family daily. However, when the visits stopped, her conditions made it difficult for her to understand why.

Her family tried to explain the situation over the phone but “she had visits every day, often twice a day, so the fact that visits completely stopped was difficult for her to understand,” says Goulet.

Following the CHSLD “lockdown,” Goulet’s family was separated from their mother for seven weeks with little to no opportunity to connect with her by phone or video call.

Since the start of the pandemic, Quebec has had the highest number of infections and deaths in long-term care homes in Canada. Nia Long Term Care COVID-19 tracker calculates that more than 1,000 individual care homes in Quebec were infected with more than 33,000 confirmed cases among residents and workers. About 8,000 people have died, most in less-than-ideal circumstances in so-called “red” wings – separated from family, friends, and familiar surroundings.

For Goulet, when his mother’s care home informed the family she had COVID-19 and would be moved to the “red” zone of the centre, he knew he had to do something. He says it was an easy decision to volunteer to help out while also getting to see his mom.

“I was retired, I had the time,” explains Goulet, who was able to leave his volunteer position after one week, once long term care homes reopened to primary caregivers.

“I was lucky. I got some training and they agreed that I would work in the nursing home where my mother was,” he says. “I was able to help reduce her anxiety and distress.”

A year on, Goulet says his mother was one of the lucky ones, contracting COVID-19 and developing minor symptoms before recovery. The possibility of her succumbing to the illness was something that Goulet says would have been unbearable.

“We know that she will die, my mother is not eternal. But if she dies of COVID-19 alone, without help or with very little help, without her relatives? That was, for us, an avenue we refused to accept.”

A reckoning may have started in the wake of the situation in Quebec’s care homes.

On May 6, a Quebec judge approved a $5.5-million settlement to be paid by Groupe Katasa, a Gatineau-based private company that ran seven long-term care facilities in Quebec, including CHSLD Herron, where 38 residents died from COVID in a month in 2020. Residents moved out of Herron when the home in Dorval, on Montreal’s West Island, closed its doors after Quebec health authorities placed it under trusteeship in November 2020.

Arthur Wechsler, managing partner at Kugler Kandestin LLP, was one of the lawyers who represented a class action suit against CHSLD Herron. He says families described  almost unimaginable conditions inside the home. When the local health authority, the CIUSSS Ouest-de-l’Île-de-Montréal, arrived at Herron in March 2020, it was reported there were only three employees caring for 133 residents.

“When you take a class action, you have no idea how many people are going to be affected,” says Wechsler. “Next thing we knew, in the next month or so, we had 70 families reach out to us.”

There was one story after another, he says. Stories of people’s parents being left in feces, another in urine. Other residents experienced malnutrition and dehydration or were even left naked in bed, he notes.

Wechsler says a number of families are looking ahead to the coroner’s inquest, taking place this fall – something which he says could possibly result in criminal charges.

Justice Donald Bisson of Quebec Superior Court, who approved the payout, noted that the case has the potential to have an impact, says Wechsler – something his firm and the families hope materializes into better policy in both public and private long-term care facilities.

“Unless you talk about it, and bring it to the forefront, it’s never going to be resolved,” says Wechsler. “It’s just unfortunate that a pandemic was required to bring this to the forefront.”

Goulet, whose mother still resides in the same public CHSLD, says that although life in long-term care homes in Quebec is starting to go back to normal – with mass double-vaccinations providing residents a certain degree of normalcy – chronic issues still need to be addressed.

He points to issues in management, staff shortages, the lack of stability for residents and families, and the fact that almost 37 per cent of CHSLD staff are unvaccinated, as reported in April. He says these issues need to be highlighted to improve the care people like his mother receive.

“It’s remarkable that we beat COVID-19, but it wasn’t done without a crisis.”

First Person: Getting a dose of COVID-19 vaccine