1 week ago 0 1 min read
We use cookies to provide a personalized experience for our users. By continuing to browse this site, you give consent for cookies to be used.
Got it!
Home > News > Ottawa > Raising a stink about public washrooms in Ottawa: Why you should care about toilet privilege 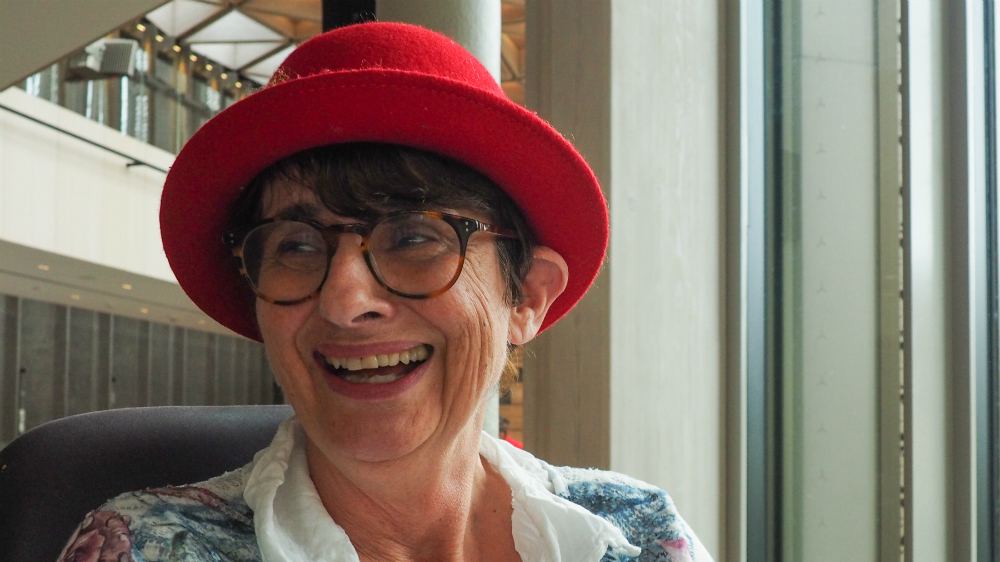 "Bathrooms are an indication of who counts, or who matters,” says Karen Scott, who uses a wheelchair. “I frequently feel that as a disabled person when things are not accessible to me, it sends the signal all the time: ‘you don’t matter.’” [Photo © Olivia Robinson]
Life

Raising a stink about public washrooms in Ottawa: Why you should care about toilet privilege

Around four years ago, Zeinab Mohamed and her daughter found themselves at Hurdman Station, one of Ottawa’s busiest transit hubs, when her young daughter uttered three panicked words: “I gotta go.”

“We were taking bus after bus,” she said. “It was quite late and I tried to find a washroom, but she peed on her feet.”

At the time, there were no public washrooms available to Mohamed, and any nearby stores had already closed.

Mohamed, who uses a wheelchair, says it’s doubly challenging to find an accessible washroom as a parent. Her distressing experience at Hurdman inspired her to join Gotta Go! Ottawa – a small but passionate team with seven core members. The group advocates for more accessible, clean and safe public toilets throughout the city.

“We’re really kind of constipated in our toilet thinking.”

– Lezlie Lowe, author of No Place To Go: How Public Toilets Fail Our Private Needs

Initially, the city considered a pay-to-pee model at its LRT washrooms, but after the outcry from Gotta Go! Ottawa and others, the city reconsidered. When the first phase of the LRT eventually opens, Hurdman will have a public washroom, along with Tunney’s Pasture, Blair, and Bayview stations, according to Steve Cripps, director of O-Train construction. None of them will be pay-per-use.

For Gotta Go! Ottawa, the goal is simple: get people talking about what it means to have toilet privilege – a concept linked to the ease with which a person can access facilities if they are able-bodied, cisgender, middle-class and healthy.

For people who use mobility aids, who are transgender, who are experiencing homelessness, or who are one of the nearly 270,000 Canadians that suffer from inflammatory bowel disease – a seemingly simple task of locating the closest washroom can quickly become a nightmare.

“When you think about bathrooms, they are part of the common and they are not unlike streetlights or trash cans or transit systems,” says Lezlie Lowe, author of No Place To Go: How Public Toilets Fail Our Private Needs. “They are things we need in order to navigate the urban space.”

On Nov. 3, Gotta Go! Ottawa hosted Lowe at the National Arts Centre where she chronicled her fascination with public washrooms and the how the stigma surrounding the biological and societal factors of bathroom use makes it challenging to have productive discussions.

In September 2015, city council voted to collect and disseminate data about Ottawa’s public washrooms so that third parties could use the information to create apps – resulting in ottpee.ca. But many of these locations are fraught with barriers – some are only open seasonally, some have limited hours of operation, or in the case of the Alta Vista, Rideau and Rosemount library branches – require a special key or buzzer to access.

When public washrooms aren’t available, Lowe says public defecation can become the only option. In 2017, the city received 27 complaints about human defecation, up from 15 in 2016.

Joan Kuyek, chair of Gotta Go! Ottawa says that while some are pushing for more money towards public washrooms, her organization is advocating for more ecological and economical options for the city’s public washrooms – like portable toilets in parks, gender-neutral washrooms and directional signage to direct Ottawans to a local loo.

“It’s just shocking actually that we would do something like a splash pad and not think about the fact that kids and parents and caregivers have to come and go to the bathroom,” she says.

During the summer of 2018, the City of Ottawa added toilets to 16 parks across Ottawa – adding to its pre-existing fleet of 45 toilets that are available to park-goers from May until September or October.

Yellow: 2018 seasonal toilets.  Red: pre-existing public washrooms
Some public washrooms are seasonal portable toilets, while others are year-round and in public buildings, like library branches.
SOURCE: Open Data Ottawa and Dan Chenier, General Manager of Recreation, Cultural and Facility Services with the City of Ottawa.

“These were installed in proximity to splash pads or sports fields where there was known high demand or no nearby alternatives,” wrote Dan Chenier, general manager of recreation, cultural and facility services with the City of Ottawa in a Nov. 6 email. All but three of the new units are accessible and gender neutral, costing the city roughly $12,000 altogether.

Publicly available washrooms, on the other hand, pose their own set of unique concerns.

“Bathrooms are an indication of who counts, or who matters. … I frequently feel that as a disabled person when things are not accessible to me, it sends the signal all the time: ‘you don’t matter.’”

Karen Scott, who uses a wheelchair, is persistently perplexed by the increasing number of publicly-available washrooms that claim to be accessible, but in reality aren’t. Recently, Scott telephoned a restaurant ahead of time to ensure they had an accessible washroom for her to use. When nature called, Scott’s wheelchair couldn’t fit through the washroom door, forcing her to leave the restaurant where her family had gathered for a birthday celebration – and use the facilities of a nearby restaurant.

Related Stories: You go, I go, we all go: toilet talk with Lezlie Lowe﻿

Scott is now pressing the City of Ottawa to craft a bylaw that would prevent restaurants from falsely advertising accessible bathrooms.

As for Gotta Go! Ottawa, the group has released an updated report on the state of the city’s washrooms to coincide for World Toilet Day, which was recognized on Nov. 19.

Regardless of whether a washroom is public or just publicly-available, Lowe says there needs to be a nimbler understanding of the diverse set of needs for public bathrooms users.

“We’re really kind of constipated in our toilet thinking.”

One of the more successful public bathroom projects is The Portland Loo, developed in part by the City of Portland. These washrooms are free, accessible and open at all hours. They are designed to combat common washroom woes, like graffiti, and the open grating at the top of the stalls allows bathroom goers to see if it’s in use. Click through our slideshow to see photos of some of the more pioneering privies across the globe. 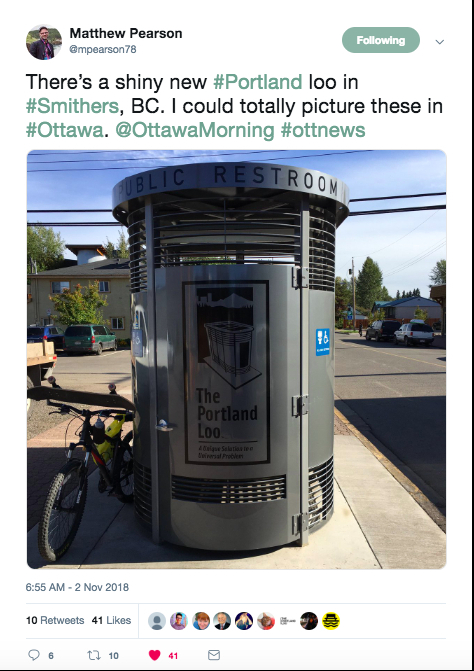 From pipes to pots, Cannabis Expo returns to Ottawa