3 weeks ago 0 4 min read
We use cookies to provide a personalized experience for our users. By continuing to browse this site, you give consent for cookies to be used.
Got it!
Home > News > Transit > Rising prices at the gas pump putting pressure on Ontario drivers 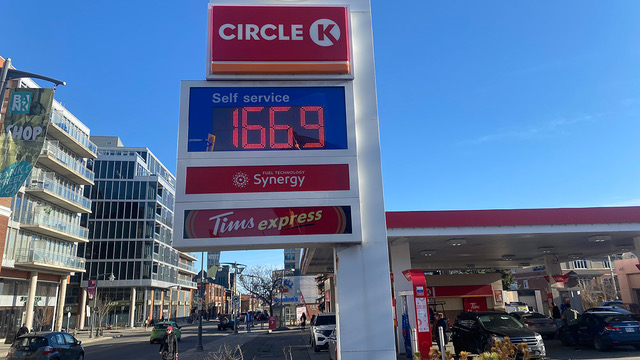 Since Russia declared war on Ukraine, Canadians have seen gas prices spike to unheard of levels reaching almost $1.90 a litre in Ontario in early March. Today, the price is still well above what people are used to paying at about $1.50 a litre, according to gasbuddy.com.

Faith Anthony, 20, a resident of Old Ottawa South, says that, while these prices are not affecting her directly, they are affecting her family.

“The stress levels in my house over gas prices are extremely high and morale is getting increasingly low,” she said. “I feel awful any time my parents drive me anywhere because it’s so expensive, and public transit is just a nightmare.”

Gas price inflation is affecting Canadians financially. It is particularly acute for those in small towns where there is no public transit.

Luca Martin, 20, who is from Drayton, in southwestern Ontario, relies on his Kia Rondo to get him to and from work.

“I rarely filled up my car before the spike in prices, but I’m definitely not doing that now. I had to fill it up (recently) and it was $50 to only get it to three-quarters of the tank,” he said.

“It's gotten so expensive to fill my tank up. It just makes way more sense to take the bus to school these days if prices are going to stay this high,” Nuccitelli says.

Some may speculate high gas prices might help eases the climate crisis. But Patrick Coe, a Carleton University economics professor, has some doubts.

He says if this is a short term spike in gas prices there will not be great improvement in the world’s climate.

“If gas goes up maybe you can reduce the number of trips you do a little bit. Maybe take public transport more ... but you can’t really make big changes over a short period of time.

"Where you may see more changes is if gas prices remain high then let’s say two years from now you change your car. Then at that point maybe you decide to buy an ... electric car ... (but) over the short term it’s probably not going to make much difference.”

And with warmer weather approaching Coe noted, "people tend to drive more in the summer. So that would increase the demand for gas. When we see more demand we expect to see prices rise as well.”

Higher gas prices have even prompted the Ford government to lower Ontario’s gas taxes by 5.7 cents per litre and fuel tax by 5.3 cents per litre for six months starting July 1.

Whether that will help ease the pain this summer remains to be seen.

IN THE NEWS: Tuesday, April 19