4 days ago 0 6 min read
We use cookies to provide a personalized experience for our users. By continuing to browse this site, you give consent for cookies to be used.
Got it!
Home > News > Ottawa > Risk of children swallowing nicotine liquid in vapes means national poison hotline needed, public health says 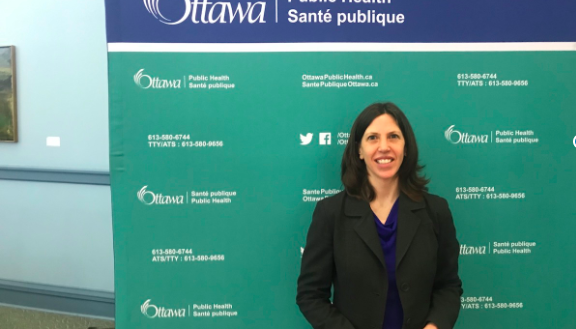 Dr. Vera Etches to a Board of Health meeting Tuesday evening about the risks to children of nicotine liquid in e-cigarettes. [Photo @ Ben Barak]
Health

Against the backdrop of increasing knowledge about the health risks of vaping, especially for youth, health officials are trying to develop measures to address the risks for an even younger age group: toddlers.

Ottawa Public Health is asking the federal government for a national poison control hotline. Dr. Vera Etches, the city’s medical officer of health, said a major reason for that is growing concern over children swallowing potentially toxic doses of the liquid nicotine contents of vaping and e-cigarettes.

Etches said a national point-of-contact for poison control, one that’s visible on product packaging, may mean that help is provided quicker to those who need it.

“It’s not top of people’s minds to know who to call when your child has just swallowed something and so having (the number) actually on the container would be right at hand and people would be able to get assistance,” Etches said.

Canada has regional poison control centres based in different provinces or cities with different numbers, but Etches said that’s one of the challenges.

“It’s not clear actually everywhere in Canada that there is a poison control centre to call. So we are asking the federal government to create something new,” she said.

Ottawa Public Health’s recommendation is one of a few submitted to Health Canada about vaping products, approved by the city’s Board of Health at a meeting at City Hall on Feb. 10.

In December 2019, following evidence of increased prevalence of vaping among youth and teens, Health Canada proposed new regulations to limit the promotion of vaping products to youth. The city’s recommendations are intended to complement the regulations.

Health Canada has already flagged the risk of children ingesting the contents of vaping products. Identifying the risks of vaping on its website, the agency says that “there have been fatalities as well as non-fatal nicotine poisoning caused by children swallowing vaping liquid.”

In its December proposal, Health Canada suggested child-proofing the packaging of vaping products, and limiting the nicotine content “to ensure that vaping products are not toxic to children if accidentally ingested.”

Health Canada’s proposal focuses mainly on regulations prohibiting promotion of vaping products anywhere that can be seen or heard by youth, including public spaces, billboards, convenience stores and online.

The city’s recommendations outline some gaps to be filled. For example, they stresses the need to closely monitor influencers on social media, as well as video games and blog posts, among others.

Ottawa Public Health has long been a proponent of getting vaping out of the hands and away from the eyes of youth. Early last year, its Let’s Clear the Air 3.0 report — a third installment of a report advocating for measures to move toward a smoke-free Ottawa — contained recommendations to both provincial and federal governments on ways to protect youth and young adults from the influence of tobacco and vaping.

The agency’s other recommendations to Health Canada include developing awareness initiatives about the health risks of vaping, expanding on treatment options for those addicted to vaping nicotine, and further researching the prospect of e-cigarettes as a treatment to nicotine addiction.

The 25th Hour: One man keeps his promise to a loyal companion