6 days ago 0 6 min read
We use cookies to provide a personalized experience for our users. By continuing to browse this site, you give consent for cookies to be used.
Got it!
Home > Heritage > SAW Gallery’s artist-in-residence program finds home at NCC’s renovated Rochon Residence 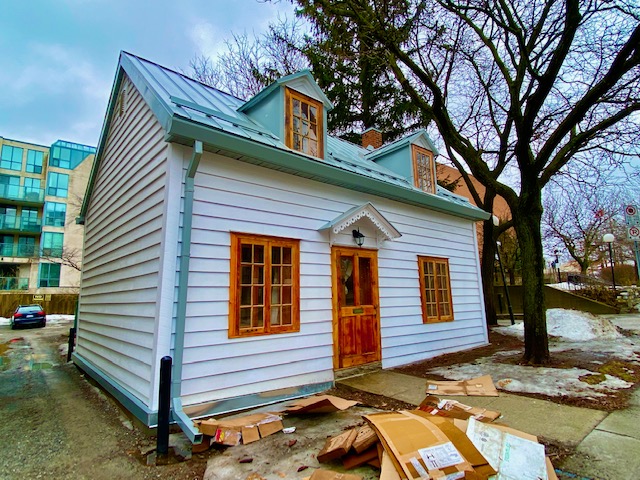 The Rochon Residence in Lowertown is now part of an artist-in-residence collaboration between the National Capital Commission and the SAW Gallery. [Photo © by Hibah Salaria]
Arts & Culture

The historic Rochon Residence in Lowertown has begun housing artists partnered with the SAW Gallery and the National Capital Commission for the Capital Culture Lives Here Program.

The program aims “to connect Canadians with arts and culture, through partnerships with cultural organizations,” according to an NCC description.

“As the steward of heritage buildings and sites in the National Capital Region, the NCC undertook the renovations necessary to revamp the Rochon Residence in 2021,” said NCC spokesperson Maryam El-Akhrass. “The Capital Culture Lives Here program seeks to transform under-used properties, such as the Rochon Residence, into inspiring creative spaces.”

The renovated residence is now a living space for artists working in collaboration with the SAW Gallery, located in the Arts Court complex at Nicholas and Daly streets near the Rideau Centre.

“The NCC has a strong tradition of protecting and showcasing the heritage of the National Capital Region,” said the NCC’s chief executive Tony Nussbaum. “I am very pleased that we have been successful in launching this artist-in-residence program, finding a creative partner to animate the Rochon Residence, and making it publicly accessible.”

Some elements of SAW Gallery’s residency programs focus on Indigenous and circumpolar issues.

“With a strong focus on Indigenous artists from across the circumpolar North, SAW’s residency program hopes to build bridges between Indigenous and non-Indigenous communities.”

“The Rochon Residence,” said El-Akhrass, “is now home to artist-run centre SAW’s various residency programs, including the Nordic Lab, which provides a research and production space for artists from circumpolar nations, and educational programs geared in particular toward Indigenous youth.”

SAW’s residency goal is to connect these often-isolated communities through art and education.

“With a strong focus on Indigenous artists from across the circumpolar North, SAW’s residency program hopes to build bridges between Indigenous and non-Indigenous communities,” said SAW Gallery director Tam-Ca Vo-Van. “Our centre’s commitment to diversity and cultural exchange aligns perfectly with the aims of the NCC’s Capital Culture Lives Here initiative.”

The residency projects, which began in March, last for two to six weeks and “will allow for significant contributions to the evolution of individual and collaborative artistic endeavours,” said the NCC announcement.

Fanny Souade Sow, a Parisian artist, spent her time at Rochon expanding on the themes of her previous work.

Sow’s previous work centres around police brutality. Sow has explored the violence of the French police towards racialized people in her work. For her residency at the Rochon, Sow explored police brutality and racism in Ottawa.

Sow said she spent time “meeting some artists and some activists” and conducting research during her residency.

The NCC said the renovation of the Rochon Residence was done to preserve historical and “character-defining” elements of the building.

“The Rochon Residence is a federally recognized heritage house, thought to be among the oldest buildings in Lowertown,” said El-Akhrass. “This historic structure required rehabilitation to protect character-defining elements, in order for it to continue to be appreciated and enjoyed by current and future generations.”

Depending on the success of the Rochon residency, the NCC said it plans to expand the Capital Culture Lives Here Program to more historic residences.

According to the NCC website, the agency hopes to “establish new partnerships for the animation of other heritage sites under its stewardship.”

Buildings under consideration are the Strutt House on the Eardley Escarpment in the Gatineau Hills, the Cross House at 108 Pine Road in Chelsea, QC, and the McConnell House in Aylmer.