3 days ago 0 1 min read
We use cookies to provide a personalized experience for our users. By continuing to browse this site, you give consent for cookies to be used.
Got it!
Home > Sports > Scarborough defeats Niagara, to play for CEBL championship 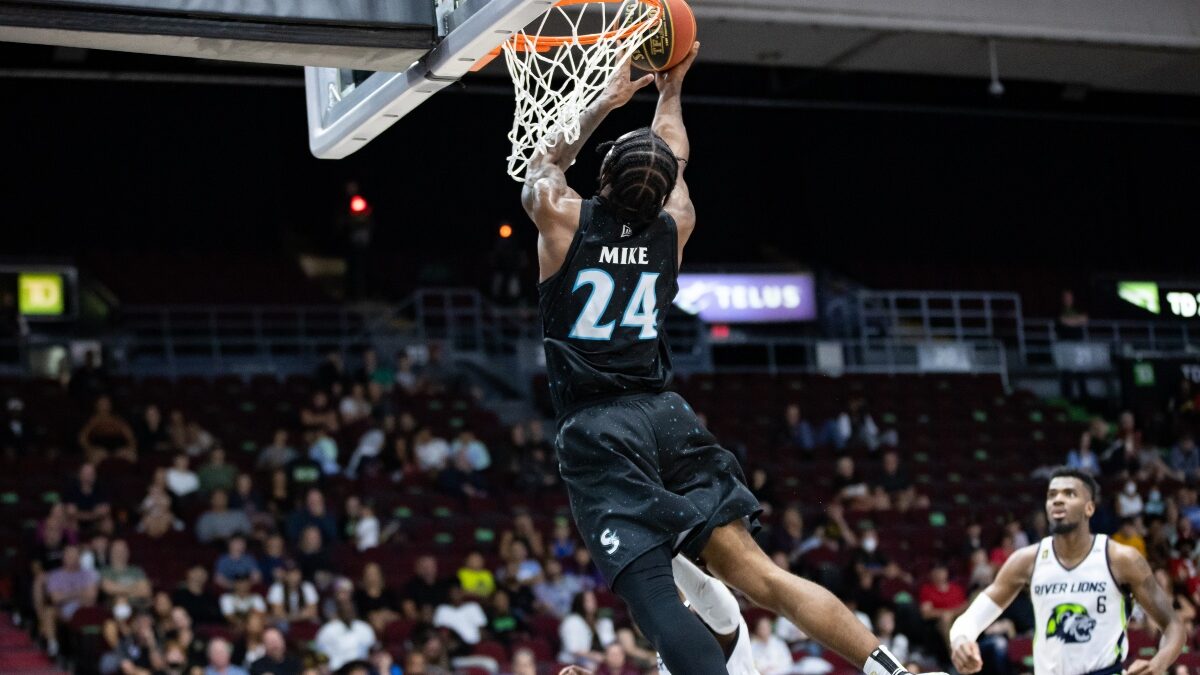 Scarborough Shooting Stars forward Isiaha Mike goes for the basket during a 93-81 win over the Niagara River Lions in the CEBL semifinals. [Photo courtesy CEBL]
Basketball

Almost exactly one year ago, the Scarborough Shooting Stars were announced as the Canadian Elite Basketball League’s eighth franchise. OVO co-founder Niko Carino would co-own the team and they would play at the Toronto Pan Am Sports Centre.

The announcement soon melted into the backdrop of standard league expansion. After all, commissioner Mike Morreale had spoken extensively about his desire to push the boundaries of the CEBL. Expansion was no surprise.

But over the course of the Shooting Stars’ inaugural season, Scarborough became the epicentre of Canadian basketball —with a burgeoning talent and fan base.

The Shooting Stars signed Jalen Harris, a second round draft pick of the Toronto Raptors. They signed rapper J. Cole. Drake plugged them on his social media and cheered them on at an early-season game.

Now, Scarborough is one win away from bringing a championship home after a 93-81 win over the Niagara River Lions on Friday in the semifinals of the CEBL championship weekend at TD Place. It would be a crowning achievement in Scarborough’s amazing inaugural season.

It was a tough fight however. In the first quarter, the River Lions obliterated the Shooting Stars, blowing past their defence and ending the frame up 26-14.

But Scarborough answered back in the second, outpacing Niagara 19-9 to make it a two-point game at the half, 35-33 for Niagara.

“We had a game that we should’ve blown open by 20 points in the first half and we allowed a really talented team to get comfortable,” River Lions head coach Victor Raso said after the loss. “I blame us for that, and that’s what’s gonna sting about this is that that was fully in our control.”

In the third, the lead changed five times. Scarborough went up for the first time on a three-pointer from Jalen Harris, then lost the lead less than a minute and a half later. Niagara went up by seven points with six minutes left in the quarter.

From that point forward, however, it was all Scarborough.

The Shooting Stars went on a 16-5 run to end the quarter, then exploded in the fourth to go up by 17 points.

Leading the offence for Niagara was EJ Onu, who scored 26 points, and Khalil Ahmad, the 2022 league MVP who scored 23.

Raso said Ahmad, who was playing in Iceland and Denmark prior to the CEBL and had never won an award like that in his career, had a “breakthrough” season that shouldn’t be overlooked.

“How much he bought into the situation is gonna change his life. It already has,” Raso said.

The loss for Niagara lands them one game short of what they accomplished in 2021, when they lost the league final to the Edmonton Stingers. With the exception of 2020, Niagara has played in every CEBL final four but has never been able to win the championship.

Raso said their formula is working and he is confident the River Lions will win the championship at some point.

“Sometimes people panic in these types of situations. They go to blow it up,” Raso said. “No. We’re a model of success in this league and we’re gonna break through.”

That doesn’t change the emotion of the moment.

“That’s what hurts about this, is that I don’t think this team reached its potential,” Raso said. “Ultimately that’s on me.”

The Shooting Stars will face the winner of the Ottawa BlackJacks and Hamilton Honey Badgers game on Sunday at 4 p.m.