5 days ago 0 7 min read
We use cookies to provide a personalized experience for our users. By continuing to browse this site, you give consent for cookies to be used.
Got it!
Home > News > Severe sandstorm creates crisis for residents in northern China 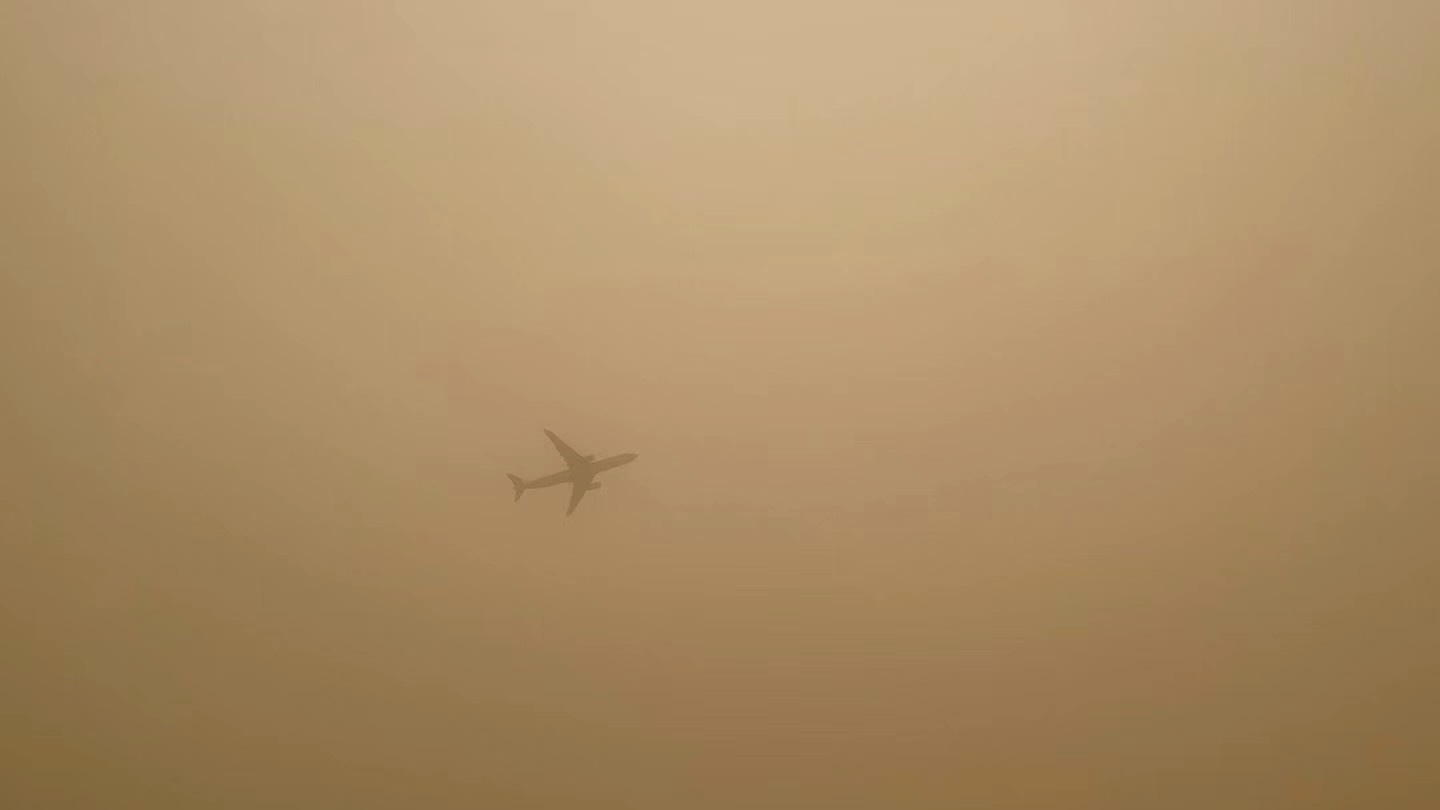 On the morning on March 15, a sandstorm hit Beijing and 11 other provinces in northern China, leaving the sky a hazy yellow. A passenger jet passing over the Chinese capital was obscured by sand and dust. [Photo © Katherine Zhang]
Environment

BEIJING — A severe sandstorm hit 12 provinces in northern China in March blanketing Beijing and creating health risks and other concerns for millions of Chinese residents.

The wind raged for two days and for many hours the sun was hidden by a gloomy, yellow-brown sky. As tall willow trees swayed in the strong wind, the pungent dust permeated the air inside and outside of homes in the Chinese capital. There was nowhere to hide for residents.

Locals were left sweeping sand from window sills with their hands.

The storm was the strongest and most widespread in a decade, according to the Chinese Central Meteorological Observatory.

The Beijing Metrological Observatory said the sandstorm originated in southern Mongolia, where it caused six deaths. At one point during the storm, 80 people in Mongolia were also missing.

The storm gradually moved south driven by the wind and it affected a large part of northern China. Mongolia, one of the most severely desertified countries in the world, has a 4,600 kilometre borderwith China.

After many years of successful sandstorm control, there has been a significant reduction in these kinds of events in northern of China. Experts with the CCMO reported that there were two main reasons for the severity of this recent sandstorm. Temperatures in northwest of China were up to 8C higher than normal, creating dry conditions. In addition, a cyclone in Mongolia generated strong wind gusts across northern China and increasing the intensity and spread of the storm.

One 21 year old Beijing resident who witnessed the sandstorm when it hit the city in mid-March, said he was shocked by the weather outside his window when he got up in the morning. Wang then immediately turned on his phone and found that a lot of his friends and family members were talking about this rarely seen phenomenon.

“I don’t even remember the last time I saw weather like this,” said Wang. “I had to cancel my plan to go out that day because the weather ruined my good mood, and I didn’t want to risk my health and expose myself in weather like that.”

Beijing’s pollution index exceeded 500 during the storm, which indicates a serious problem but the provinces of Xinjiang and Inner Mongolia were even more severely affected.

Dr. Liu, a Chinese respiratory physician, said sandstorms can affect human health in three major ways. There can be acute effects on the day of the storm, short-term lag effects and longer-term cumulative effects.

“Symptoms such as coughing, shortness of breath, dry throat, and depression increase significantly on the day of the sandstorm, especially for elders and people who smoke,” he said.

Liu said sandstorms can also spread bacteria, viruses and other harmful particles that can affect the upper respiratory tract and create lasting damage.

He said people can prevent health impacts by wearing a mask and goggles, taking a shower and washing clothes immediately after returning home and increasing the intake of vitamins.

Some elementary schools canceled outdoor classes in parts of northern China or even shut down entirely out of concern for their students on March 15.

One mother of an elementary student kept her child indoors even though her child’s school was not closed on that day.

“How could I send my kid to school in terrible weather like that?” she said. “I don’t care if she is absent from class, all I care about is her health.”

March 15 did not mark the end of the strange, sandy weather. On March 23, another sandstorm occurred in southern Mongolia, which again affected a number of Chinese provinces.

The Chinese Central Meteorological Observatory says China needs to share its experience in combating desertification with the rest of the world to prevent more severe sandstorms and improve the environment.

One strategy involves grids made of wheatgrass bundles which contain live plants. The bundles are rolled onto the sand. Protected by the wheatgrass, the plants can take root and survive.