4 days ago 0 3 min read
We use cookies to provide a personalized experience for our users. By continuing to browse this site, you give consent for cookies to be used.
Got it!
Home > Life > Share it, don’t throw it: food recovery and its challenges 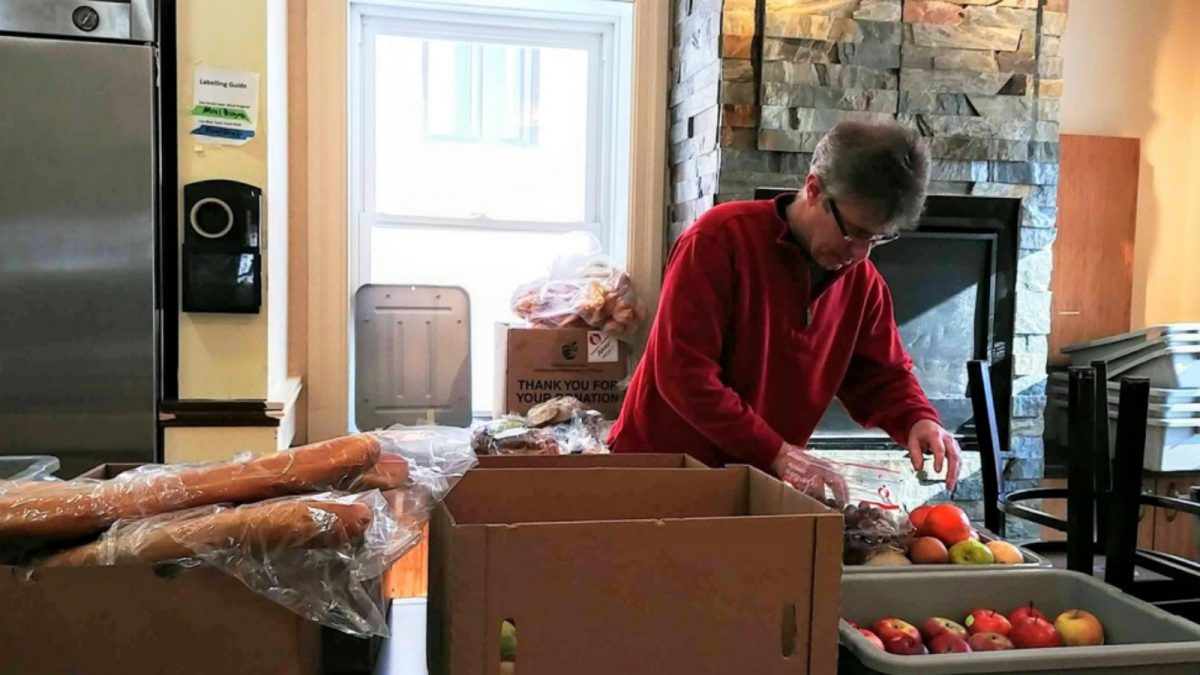 Jim Reed, a volunteer with Foodsharing Ottawa, sorts through boxes of produce collected from a grocery store to pick out the items that are still edible. Fruits with bruises or soft spots may not look the best, but they’re still good to eat so they go in the grey bins. [Photo © Lisa Xu]
Life

Share it, don’t throw it: food recovery and its challenges

Jim Reed stands outside a Herb & Spice grocery store with five big cardboard boxes filled with bruised fruits, limp vegetables and leftover baguettes. Instead of throwing them in the nearest garbage bin, Reed delivers the food to a local community kitchen where it will feed dozens of people.

As a volunteer with the food recovery organization Foodsharing Ottawa, Reed takes pride in helping to reduce waste by saving surplus food items from a landfill.

Food waste occurs in all stages of the supply chain, from the farm to manufacturing to retail and restaurants to households. It costs the country billions annually and leaves a huge carbon footprint, but a portion of that waste can be avoided, according to a food loss and waste report by Second Harvest and Value Chain Management International. The report said 35.5 million tonnes of food waste is produced yearly. A third of that food — worth about $49 billion — could have been saved, the study adds.

With the growing interest around the issue of food waste in the last few years, more companies have started working with food recovery organizations that redirect donated surplus food. But limited funding and confusion over food labels and food donation laws get in the way.

Lori Nikkels, CEO of the food recovery organization Second Harvest, said best-before dates are the “bitter culprits” that lead to more food being thrown out rather than donated because people often misunderstand what they mean.

The Canadian Food Inspection Agency states that best-before dates aren’t indicators of food safety, but guidelines referring to how long packaged products will keep its freshness, taste and nutritional value. Food producers and manufacturers determine these dates, and they are not regulated.

Best-before dates are also applied to foods that don’t necessarily need them, such as canned goods and frozen food, said Denise Philippe, from the National Zero Waste Council, an organization that works with governments, businesses and non-profits to develop waste prevention strategies.

“A lot of people look at that date as gospel, in terms of ‘I should throw it out as soon as I hit that date,’” said Reed. “It’s important to make sure your food isn’t bad, but you shouldn’t just assume that your food is bad because it hits the date.”

“What prevents me is if I see any sign of mold or anything, or it just smells funky,” he said.

Businesses often pull items from shelves when they’re close to the best-before dates because they find customers don’t want to buy them, said Philippe, who also helped write the council’s plan to reduce food waste.

Best-before dates are the only tool retail staff have to determine whether food is still good, said Chris Chase-Onions, who’s been working at Herb & Spice for seven years. They might not want to donate food if it’s past the date since the quality might be compromised.

“We can’t open every container of expired dairy and check each specific one if it’s still OK,” he said.

Businesses may also have a hard time donating because receiving organizations might not want to distribute food once it has past its best-before date, so there can be misunderstandings of the date within the social service sector, said Philippe.

There needs to be more public education on what these dates mean and different practices on best-before dates, she said.

Philippe said the council recommends using a two-term code to minimize confusion: a ‘best if used by’ date as a shelf-life guideline and an expiry date to indicate when food is no longer safe to eat.

“People across the supply chain need to realize ‘best before’ doesn’t mean ‘bad after,’” said Nikkels.

When it comes to food safety, another barrier preventing companies from donating food is the concern that they will be liable if their products make someone sick, said Philippe. However, there is legislation in different provinces that protects companies from liability for the most part, she said.

The Ontario Donation of Food Act states that companies and personal donors are not liable for causing illness if they donate food that’s still edible without an intent to harm.

Companies are also concerned that their brand might be affected if consumers receive products that aren’t at their best quality, even if they don’t get sick from it, added Philippe.

“So this is really more of an educational piece for people as opposed to changing the standard regulations,” said Nikkels. “They exist, people just need to know about them.”

Emily Mirsky, owner of COBS Bread in Barrhaven, said she’s not too worried about liability. When organizations come to pick up their end-of-day products, they sign agreements stating they’re going to follow certain safety methods when handling their food, she said.

“We’ve gone ahead to take the precautions to make sure that the food is transported to the place it needs to go in the proper way,” Mirsky said.

Food recovery organizations face a need for staff trained in food safety, and proper transportation and equipment, which relies on funding.

“As a non-profit, the barriers are always going to be funding,” said Nikkels. “We don’t sell anything. We sell good will. We sell social capital.”

Economics professor Timothy Richards said relying on food donations might not be the most effective way to rescue food because it takes a different motivation for suppliers and farmers to donate food as opposed to selling it.

“Farmers aren’t in the business of being altruists and giving away food just as a matter of course,” said Richards, who teaches at the Arizona State University. “It’s a lot cheaper for them to just plow it under.”

Richards said organizations can potentially save more food if they were to use more of a market system, where there’s incentives for suppliers to sell their food and demands for products from consumers.

An example of this is Imperfect Produce, an organization based in San Francisco that sources “ugly produce”  — misshapen or physically imperfect produce that’s still edible but often thrown out — from farms and sells it to customers at a cheaper price. Their platform works because farmers profit by selling their imperfect products rather than throwing them out, and consumers also benefit because they’re paying less compared to regular produce, said Richards.

Finding ways to encourage people to save food, combined with raising awareness about food rescue and making it more mainstream to participate would help reduce challenges for food recovery organizations, said Reed.

Foodsharing Ottawa’s strategy going forward includes partnering up with more businesses and recruiting more volunteers to do pickups, said Reid — ultimately being “effective beyond our own little organizations.”