5 days ago 0 3 min read
We use cookies to provide a personalized experience for our users. By continuing to browse this site, you give consent for cookies to be used.
Got it!
Home > News > Ottawa > Stunning ‘sunset’ park planned for controversial Zibi development on Ottawa River 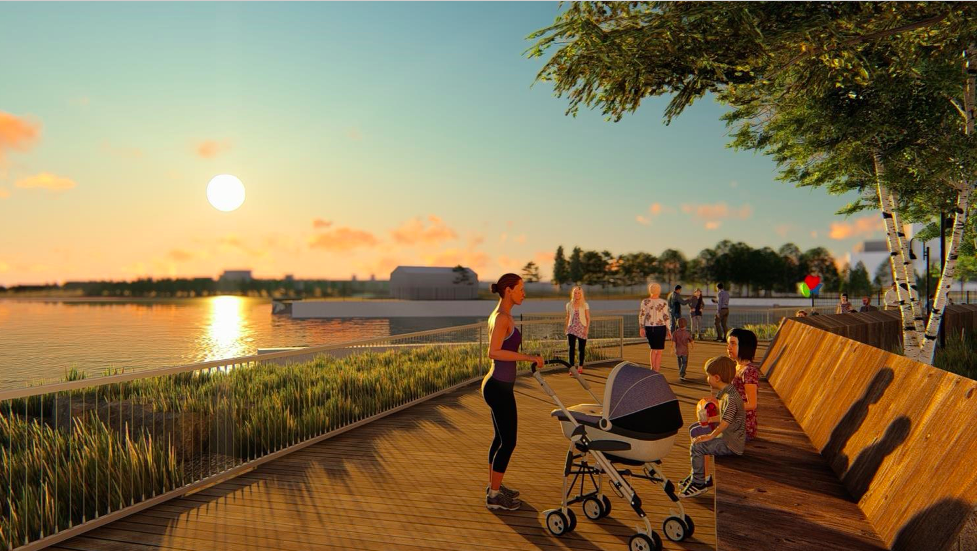 Artist illustration shows a sunset over the Ottawa River seen from what would be Pangishimio Park on Chaudière Island. Pangishimo is the Algonquin word for “sunset.” [Image courtesy National Capital Commission]
Business

Plans for a 25-storey residential building on Chaudière Island as part of the Zibi development include a new city park — named Pangishimo after the Algonquin word for sunset — offering a stunning, westward view of the Ottawa River.

The City of Ottawa’s planning committee examined a report earlier this year on the project’s latest design, which includes a new city park at the western end of the island.

The design of Pangishimo Park was approved by the National Capital Commission in April 2020 and is expected to open later this spring.

Maryam El-Akhrass an NCC communication strategist, said “the park will highlight Indigenous culture and heritage. Featuring art and interpretive installations, it will offer an interpretive experience, and promote an appreciation and understanding of the Algonquin culture.”

The park will be accessible year-round and will be a naturalized public green space. The creation of the park allows for an accessible pathway connecting the Ottawa River shoreline behind the Canadian War Museum to nearby Chaudière Falls Park.

A planned boardwalk provides multiple lookouts to enjoy the sunset from the shore of the island. Its design also includes a grassy area for informal recreation, as well as play features for children.

The park is a collaboration between the NCC and the companies behind the Zibi residential-commercial development on the Chaudière Islands and adjacent Gatineau shoreline. Jesscica Schultz, Zibi’s event specialist said: “An important element of our project is providing access to the waterfront and greenspaces to the public on a site that was previously industrialized.”

The area where the park is being built — like much of Eastern Ontario and Western Quebec — is part of the traditional, unceded territory of the Algonquin people. The park was planned in recognition of the region’s Indigenous heritage.

The area immediately around the Chaudière Falls is sacred Algonquin land where tribal meetings and tobacco ceremonies occurred. One such ceremony was witnessed and recorded by French explorer Samuel de Champlain when he travelled to the region in 1613.

Chaudière and Albert Islands have been industrial properties for more than 150 years, but its Indigenous history has not been erased.

The Assembly of First Nations and nine of 10 Algonquin chiefs initially publicly opposed the Zibi project. But since then Zibi has been backed from the outset by the Algonquins of Ontario and the Algonquins of Pikwakanagan First Nation, located near Renfrew, and was later endorsed by two other Algonquin communities in northwest Quebec, Timiskaming and Long Point. A construction company from the Kitigan Zibi Algonquin First Nation near Maniwaki, Que. is also involved in the project, but Kitigan Zibi leaders are among those opposed to the Chaudière development.

Critics among the Algonquin communities insist they weren’t properly consulted before the City of Ottawa approved rezoning of the former industrial site to allow for the project, led by the developers Windmill and Dream. Those communities still want the federal government to stop the development.

Divisions among Indigenous people have complicated the situation as some support the building of new parks while others do not.

The park will have art pieces designed by Algonquin partners and Artscape, a not-for-profit organization, believing it’s an appropriate way to reclaim an area lost to industrialization in the 19th century.

Free the Falls, a group of advocates who support a non-industrialized vision for Chaudière Falls — which is harnessed today as part of a Hydro Ottawa hydroelectric power station — want to leave the land as it once was.

The group has held various protests over the years and has over 5,000 signatures petitioning to “free the falls.”

Free the Falls leader Peter Stockdale, an Indigenous issues activist, described the land where the park is being built: “It’s a shadow of its former self and, of course, it’s not very much for the quiet contemplation of a 7,000-year-old sacred site, either.”