5 days ago 0 6 min read
We use cookies to provide a personalized experience for our users. By continuing to browse this site, you give consent for cookies to be used.
Got it!
Home > Business > Small Business > Supports for downtown Ottawa businesses follow convoy nightmare 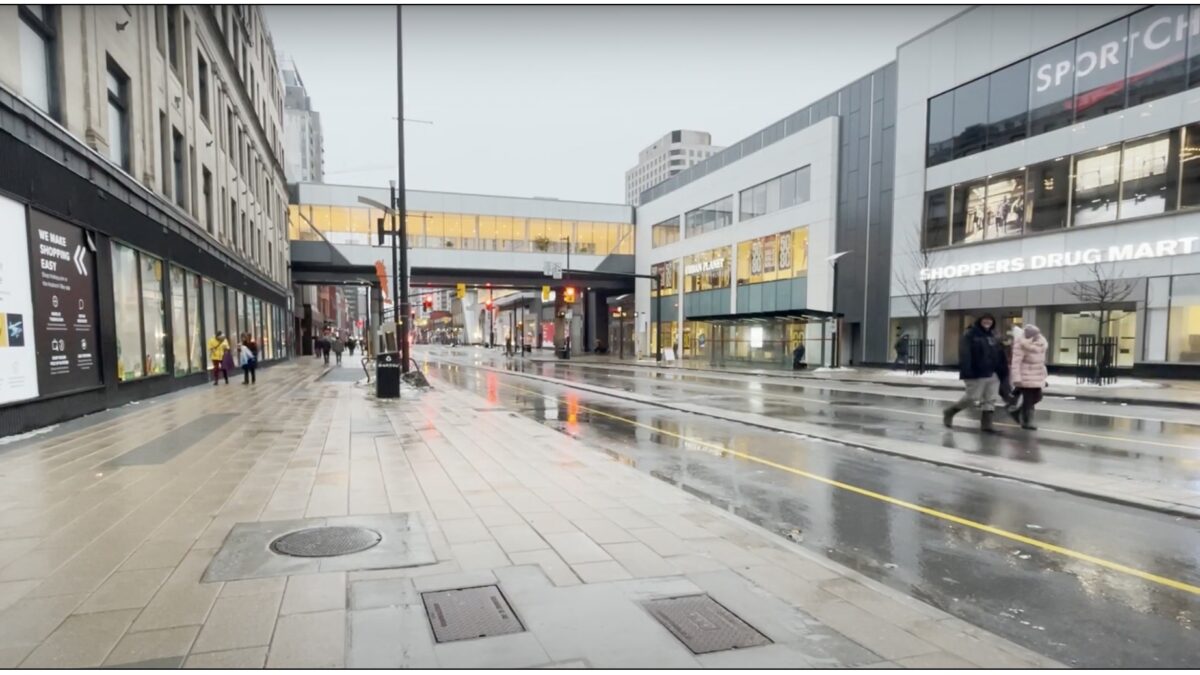 Customer traffic outside the normally bustling Rideau Centre dwindled to almost nothing during the trucker occupation of downtown Ottawa. [Photo © Emma Perreault]
Business

By EmmaPerreault, 8 months ago 0 5 min read

When trucks started piling into the capital in late January with the so-called “Freedom Convoy”, many downtown businesses faced a new crisis on top of what was an already a difficult time.

Because of the closure of streets throughout the downtown core, and the various disruptions created by the occupation, many businesses decided to shut their doors to protect themselves and their employees.

During the first weekend of the convoy, a number of protestors packed the Rideau Centre, flouted the mall’s mask policy and created a ruckus that left many customers and retail employees feeling threatened. The mall was subsequently shut down for three weeks beginning Jan. 29.

The closure created further hardship for stores during an already slow time in the retail business because of the ongoing COVID-19 pandemic and the annual post-Christmas downturn in sales.

While some relief would follow — including a $20-million federal recovery fund announced in February for Ottawa businesses affected by the occupation, and a downtown-focused “Workplace Confidence Initiative” launched last month by the Ottawa Board of Trade and Ottawa Tourism — the impact of the convoy crisis on the capital’s commercial core was profound.

Zulu and Wolfe, a locally owned clothing boutique in the Rideau Centre, was one that closed its doors because of the unruly occupation.

The owner, Oreana Campbell, said the shop missed out on sales during a crucial time for the business. And the abrupt closure of the shopping centre at the end of January came as a surprise, without warning from the mall.

“We had got a memo earlier on in the week, saying that they were aware of the situation . . . that (the protest) was going to be an outdoor event … and that there was going to be more to follow,” Campbell recalled. Campbell said she didn’t have a corporate team to help support the store during closures and her employees couldn’t make it to the downtown core anyway because of the trucker blockade.

The closure blocked Campbell from functioning within her store, and even the option of curbside pickup was unavailable because of mall’s location within the convoy occupation zone.

“There’s absolutely no way of making any money right now other than online,” Campbell said at the height of the occupation. “But again, nobody’s got anywhere to go because everything is closed. And this time, there’s no financial help.”

While businesses like Zulu and Wolfe struggled, the Ottawa Board of Trade was fighting for them to gain support from the government and pleading with area residents to shop local during the crisis.

President and CEO Sueling Ching said the business advocacy organization worked hard to gain support for the businesses that are the lifeblood of our local economy.

“Building business, consumer and employee confidence is a big part of what we see as a successful recovery that has been shaken by what’s gone on here in Ottawa.”

“It’s been so devastating to the businesses that are directly affected geographically, and that downtown core, but to the surrounding businesses in the whole city,” Ching explained during the occupation, citing commuting issues among employees who live or pass through the area that was overrun for nearly a month by the truckers and convoy supporters.

“Building business, consumer and employee confidence is a big part of what we see as a successful recovery that has been shaken by what’s gone on here in Ottawa,” she added at the time.

The Ottawa Board of Trade led lobbying efforts with the federal government for the financial support eventually secured for businesses affected by the occupation.

The Board of Trade “called on every level of government to quickly and financially support these businesses that have been unable to do business, even beyond what the restrictions were,” Ching said.

“Our local representatives have said that they are taking the request seriously, and we fully expect them to respond fairly quickly,” she said just days before the federal government announced its $20-million fund.

The OBOT also created a hashtag (#BuyLocalOttawa) to encourage residents to support their local businesses during this tough time of uncertainty and fear. They also urged business owners to become a members of the local board of trade to have influence over the future of the city during its recovery from the occupation and the pandemic.

On Feb. 19, with the occupation still far from ending, the federal government announced the $20-million fund — with eligible Ottawa businesses able to apply for up to $10,000 in non-repayable support — as compensation for having “suffered losses due to these illegal blockades” of downtown streets.

“We have heard the growing concerns and frustrations from many of the Business Improvement Associations and small businesses in downtown Ottawa that were forced to close, or have seen their business drastically impacted due to the illegal blockades in Ottawa,”  Helena Jaczek, the federal minister responsible economic development for Southern Ontario, said at the time. “Our government’s investment of up to $20 million to Invest Ottawa will help local businesses get the support they need to recover.”

On March 23, the Ottawa Board of Trade and Ottawa Tourism also launched a Workplace Confidence Initiative aimed at rebuilding “employee confidence in the hardest hit sectors in the National Capital Region, such as the hospitality and tourism industry, as well as the business districts that support them.”

The initiative includes workshops to provide mental health support to people working in the downtown area and elsewhere in the city, as well as reassurance about public health protocols.