6 days ago 0 5 min read
We use cookies to provide a personalized experience for our users. By continuing to browse this site, you give consent for cookies to be used.
Got it!
Home > Health > Mental Health > Tiny house, big benefits: Living with less can make you happier, research shows 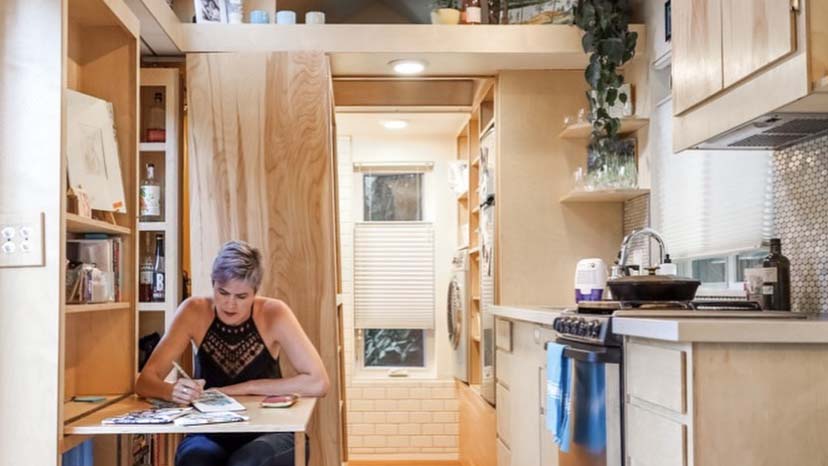 While Kari Gale was on an 800-km pilgrimage in Spain, she experienced an epiphany. Gale had just come through a divorce and sold her 2,100-square-foot home.

“I had this idea of my life and I was on this trajectory, then suddenly the rug had been pulled out from underneath me. And I just kept thinking, ‘What do you want to do with your life now?’ ”

She set out on a 15-month expedition and walked the Camino De Santiago with her 55-litre backpack and her wandering thoughts.

Each day, as she hiked, she returned to the creativity she’d abandoned for her corporate job. She started to draw each day and by the end of her travels she combined her drawings into a book called The Art of Walking.

The pilgrimage allowed Kari to rediscover and reconnect with what truly brings her joy and to realize what she really wants to accomplish in her life. Living and functioning with nothing but a backpack had rekindled a desire to pursue a life of creativity.

Kari became focused on determining how she could go back to “reality” and not have to work her corporate job. She no longer wanted the commute, the stress and the long hours.

How could she make enough money to cover her expenses and have time for the things she loved?

“I realized I can happily live with less, and that I didn’t need to make more money — I just had to change my overhead,” said Kari.

Kari came back from her travels in 2016. She let go of her job of 11 years and began building a 200-square-foot home in Portland, Oregon.

Kari Gale joined a movement of individuals who are choosing to downsize the space they live in, simplify their life and live efficiently with less. These days the tiny house movement is proving to be about much more than living in a small space. It’s having a significant impact on the homeowner’s happiness.

As a minimalist lifestyle is essential to tiny home living, misconceptions regarding the balance between what we desire and what we need may lead some to believe too much sacrifice and inconvenience are required to make things in a tiny house work. However, with so many options available for customization in terms of design, building materials and compact appliances, the choices are only limited by your imagination and pocketbook.

Much like any other build, the consumer controls the number of upgrades in balancing functionality with luxury.

Jaimie and Dave Hinckle, from Kalama, Washington, decided to sell their 3,500-square-foot home in 2015 and built a 406-square-foot dream home out of two shipping containers. The home cost $80,000 US to build and has a full-size kitchen and a closet big enough to fit Jaimie’s 30 pairs of shoes.

But why would someone choose to live in such a small space? In this case, bigger opportunities for experiences and fewer things is actually better for your overall happiness.

Jaimie Hinckle is an accountant who works long hours and was tired of not having any money left over to actually enjoy.

“We were tired of working full time jobs in a big house with a big mortgage, and expensive cars, the going, going, going —  we were just tired of it. So we made this extremely bold move to downsize our entire life,” said Jaimie.

Jaimie and Dave began construction of their home in May 2015. Then, in August, Dave suffered a major brain hemorrhage that almost took his life.

Although Jaimie and Dave were already committed to changing their lifestyle and becoming more economically free, Dave’s health crisis solidified their desire to focus on what was most important to them.

“We realized that we just need to wake up and live every single day to the fullest because this really might be the last day we have left,” said Dave.

“We knew we wanted to downsize, but Dave’s brain bleed made us decide to change our life,” continued Jaimie.

Since Jaimie and Dave are no longer in mortgage debt and are no longer acquiring so many things — because their house can’t accommodate them — they now have the money and energy to invest in experiences.

“We go to work, and we make the same money, but now it doesn’t go towards our mortgage,” said Jaimie. “Our life is so much busier now, but it’s busy doing things that we want to do, not things that we’re obligated to do.”

Recent research has shown that investing in experiences instead of material purchases is more likely to make people happy. A study conducted by Cornell University in 2012 found that people are made happier by their experiences rather than their possessions. That’s because experiences are more important to sense of self and become parts of our autobiography.

Kari Gale describes how living in her tiny home gives her more time for experiences and forces her to only purchase things that she truly loves.

“If you have a big house, or you have a lot of stuff, you almost feel obligated to use all that stuff and spend more time in your home,” she said. “Whereas if you have a tiny home with your essentials, you might actually find other things that you find enjoyable that are not specifically in your house.”

Jessica says she believes that cutting back on consumption and investing in experiences is a big step towards living happier.

“When you have a lot of stuff, there’s almost this subconscious feeling that you need to get more stuff or you need to upgrade the stuff you have,” said Jaimie. “You can easily get caught up in constantly acquiring things — but when you don’t have space to put it anywhere, you can spend that money elsewhere.”

The tiny house lifestyle forces you to consume less. The natural consequence of actively deciding to consume less and live more simply has an impact on your state of mind, she believes.

In modern culture, it has become common to think that acquiring possessions will result in happiness. However, recent research has shown that consumption is not a reliable method of achieving well-being.

Jessica Desrochers describes why having fewer material items may lead to greater happiness.

Jennifer Hausen, a psychologist at the University of Luxemburg, advanced the ‘Dialogical Self Theory’ in 2018, which found that the stronger an individual’s materialism is the poorer their personal well-being is.

“I’m more present in my life because I’m not invested in consuming, I’m invested in living,” said Kari. “I used to buy things to be happy but now if I’m going to buy something I need to really love it — so I’m even more grateful for everything that I have.”

Desroches  says this method of consuming is beneficial to your mental health. She explains that, “because you only have a minimal amount of stuff, you probably feel more connected to the things you do have.” She continued: “Instead of having 20 shirts you like, you maybe have five shirts that you love, so you’re always left with what’s most important to you.”

For Kari, her essentials are obvious items such as a fridge and a bed, along with sentimental items such a vase from her closest friend’s wedding, and an antique cocktail shaker from her grandmother.

The Simplicity Institute at the University of Melbourne, Australia conducts research on sustainability. The institute conducted a multinational online survey with more than 2,000 participants who were embracing simplicity. The study found that 87 per cent of participants were happier when living more simply.

“If we are constantly spending money on things we don’t need, we can kind of lose sight of what’s needed, what’s important, and we can get distracted with all of our choices,”  said Jessica.

The tiny house movement and minimalist lifestyle can have great benefits on people’s happiness. But in Canada, the legalities surrounding tiny homes still occupy a grey zone.

City bylaws, health and safety regulations, zoning and building-size requirements vary between municipalities, which makes it difficult for people to find places to legally locate their humble abodes.

Jessica Rita is a travelling social worker in B.C. and has experienced her own difficulties with finding a safe space to park her 22-square-foot converted trailer home.

“I’ve been up against these issues for a long time, and unfortunately have been through a couple scenarios that ended up being really unsafe,” said Rita.

Rita went on to describe finding a place to park her house, commenting: “It’s honestly like you are in this sneaky black market of trying to find land that’s under the radar. I’m not really able to pick the ideal place to live unless I were to go and buy land myself — but even then there’s still bylaws that would prevent me from living in my tiny home.”

Paul Kealey is a partner at EkoBuilt, a sustainable home builder based in Carp, a village in rural west-end Ottawa. The company offers a tiny house model called the ‘coach home’, which can only be legally built if it is located on the same lot as a primary home and is connected to that home’s water and sewage systems. Many customers utilize the coach home as a secondary property for Airbnb rentals, for older relatives or for affordable student housing.

Despite the limiting bylaws, Kealey says the interest in tiny homes has “skyrocketed,” adding that, in the past, they would only have up to 25 people interested in the coach home, and now that number has quadrupled to 100 and more.

Said Kealy: “If these homes were able to be built, like, on a community scale, or out in general, the opportunity would be endless.”