2 days ago 0 4 min read
We use cookies to provide a personalized experience for our users. By continuing to browse this site, you give consent for cookies to be used.
Got it!
Home > Featured > Veterans Week in Ottawa marks 100th anniversary of end of First World War 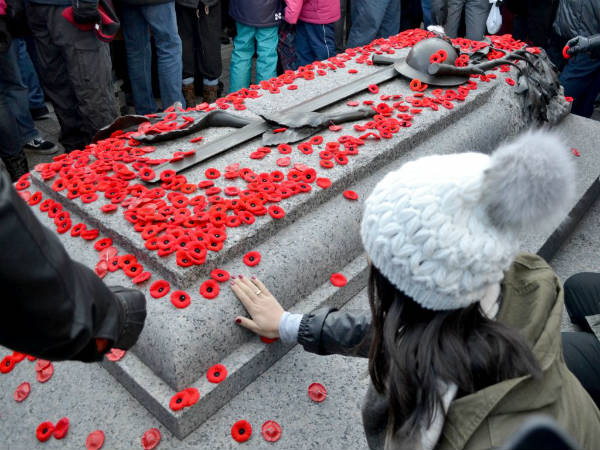 One of the moments of every Remembrance Day involves people leaving their poppies on the Tomb of The Unknown Soldier.
Canada

The ceremony, from 7 to 9 p.m. was led by Mayer Jim Watson, federal Veterans Affairs Minister Seamus O’Regan and Mark O’Neill, the CEO of the Crown corporation that oversees the Canadian War Museum and the Canadian Museum of History.

This year marks the 100th anniversary of the end of the First World War, a conflict that many scholars believe helped forged Canada’s independent identity.

Here are some events happening in Ottawa during Veterans Week:

• To Nov. 11. The interactive multi-media installation The Edge of Peace takes place in Confederation Park from dusk to 10:30 p.m.

• To Nov. 11: The World Remembers: Names of soldiers killed during the last year of the First World War are projected on the Government Conference Centre daily. The National Arts Centre’s Kipnes Lantern will broadcast pictures of soldiers, mothers, nurses and civilians. A free concert by the National Youth Orchestra of Germany will be presented in Southam Hall on Sunday at 12:30 p.m. This performance will featuring a song cycle that honours the people who were in the First World War.

• Nov. 11. The Remembrance Day ceremony at the National War Memorial begins at 10:15 a.m. and ends at noon. At 11 a.m. there will be two minutes of silence. Large crowds are expected at this year’s event.

• Until March 31, 2019: At the Canadian War Museum, Victory 1918 – The Last 100 Days is an exhibition about five final battles of the First World War fought and won by the Canadian Corps.

Veterans who wear their medals and/or uniforms can ride free on OC Transpo, Para Transpo and STO (Société de transport de l’Outaouais) services during National Veterans’ Week, to Nov. 11. Companions accompanying veterans during National Veterans’ Week also ride free of charge. At O-Train Line 2 stations with fare gates, veterans and their companions can use the video-chat function at ticket machines to get through the fare gates.