4 days ago 0 8 min read
We use cookies to provide a personalized experience for our users. By continuing to browse this site, you give consent for cookies to be used.
Got it!
Home > News > Social Issues > A 15-minute neighbourhood initiative no walk in the park for Alta Vista community because of intensification concerns 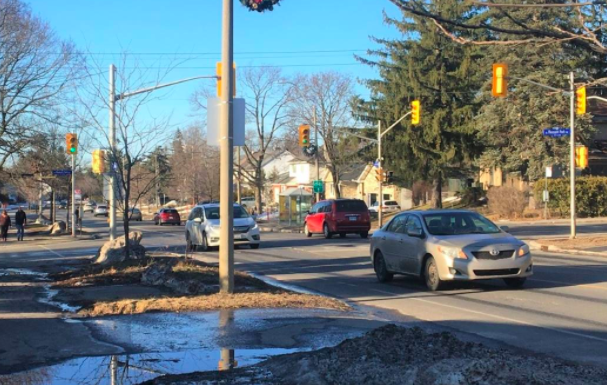 A constant stream of cars passes through the intersection of Pleasant Park Road and Alta Vista Drive, two of the main roads crossing through the community of Alta Vista, and the only roads with sidewalks and bike paths. City planners envision more multi-unit dwellings in the neighbourhood, along with greater walkability, but local residents are concerned that “intensification” could destroy the community’s character. [Photo © Rose Danen]
Community

Local residents are talking about transforming Alta Vista into a “15-minute neighbourhood,” but efforts to make the community more walkable have been overshadowed by concerns about City of Ottawa plans for intensification that come with the proposed changes.

“When people became aware of this issue, it was very focused on the intensification, and not so much the benefits,” said Marty Carr, president of the Alta Vista Community Association. “We haven’t really been able to focus too much on the 15-minute neighbourhood plan.”

A ’15-minute neighbourhood’ envisions a community that is walkable and “complete” — in other words, it is a cyclist and pedestrian-friendly neighbourhood that has shops, services, parks, facilities for recreation, learning and worship, all within a safe and enjoyable 15-minute walking distance, according to Ecology Ottawa.

“We’re in an environmental crisis. The point is to actually shift our behaviours to make an impact,” said Rosaline Hill, an architect and representative from Walkable Ottawa who has been part of the initiative to make Alta Vista walker-friendly.

Plans to transform Alta Vista and other neighbourhoods in Ottawa into 15-minute neighbourhoods were outlined in the Draft New Official Plan released by the City of Ottawa in November. The 264-page document was designed as a policy framework to guide the growth and development of the city until 2046.

One of the other key priorities outlined in the plan is residential intensification — or “regeneration” as it is called in the plan – in select neighbourhoods.

Alta Vista has been slated for relatively rapid intensification, including more multi-unit developments in a neighbourhood of mostly single detached homes.

But that plan has been met with intense concern and feedback from many Ottawa residents, especially those living in Alta Vista.

A lack of clarity in the city’s plan has been a big driver of community concern, according to Hill and Carr.

“The information in the draft seems really very clumsy when it comes to neighbourhoods like theirs. So, there’s a lot of concern, and rightly so,” said Hill.

A meeting with city staff was held in early March to try to clarify issues being raised by the Alta Vista community. More than 500 people took part in the virtual meeting.

The most important message delivered by the city during the meeting was that intensification did not include plans to fill every street in the community with apartment buildings, according to Carr.

“People were very concerned about developers coming, buying up every available property and then developing them into multi-unit buildings. The character of the community would be destroyed,” said Carr.

These concerns have affected the 15-minute neighbourhood workshops held over the last month by Ecology Ottawa and Walkable Ottawa, which were designed to consult with local residents about creating a more pedestrian-friendly community.

“What we’ve been seeing with the workshops is that communities are really enraged by this description of a small house being knocked down for a bigger house,” said Cheryl Randall, the Climate Change Campaign Organizer at Ecology Ottawa.

As a community that is dominated by cars and almost completely lacks sidewalks and bike paths, Alta Vista needs to be transformed into a 15-minute neighbourhood before it can be intensified, according to Hill.

“It’s targeted for fairly high densities. It’s targeted for limited vehicular parking – so far walkable-type development projects – but in a neighbourhood that is so profoundly not practically walkable,” said Hill. “There’s lots that really needs to be done to make the plan for Alta Vista realistic.”

Carr said infrastructure improvements such as a community centre, bus services, and more local businesses need to be made before Alta Vista can become a 15-minute neighbourhood.

“The 15-minute concept – I think it’s going to take a lot of selling to people. But I think there’s quite a few people who are really interested in it and enthusiastic about it. But they really feel that we need the improvements to the neighbourhood made first,” said Carr.

Regardless, Randall says the workshops are vital in moulding the Official Plan as it goes through redrafting.

“If the city took those concerns or suggestions on board, then neighbourhoods could really become the vibrant, healthy entities that we need them to become,” said Randall.