13 hours ago 0 1 min read
We use cookies to provide a personalized experience for our users. By continuing to browse this site, you give consent for cookies to be used.
Got it!
Home > News > Canada > ‘A little nervous:’ One passenger’s reaction to flying in Canada during the pandemic 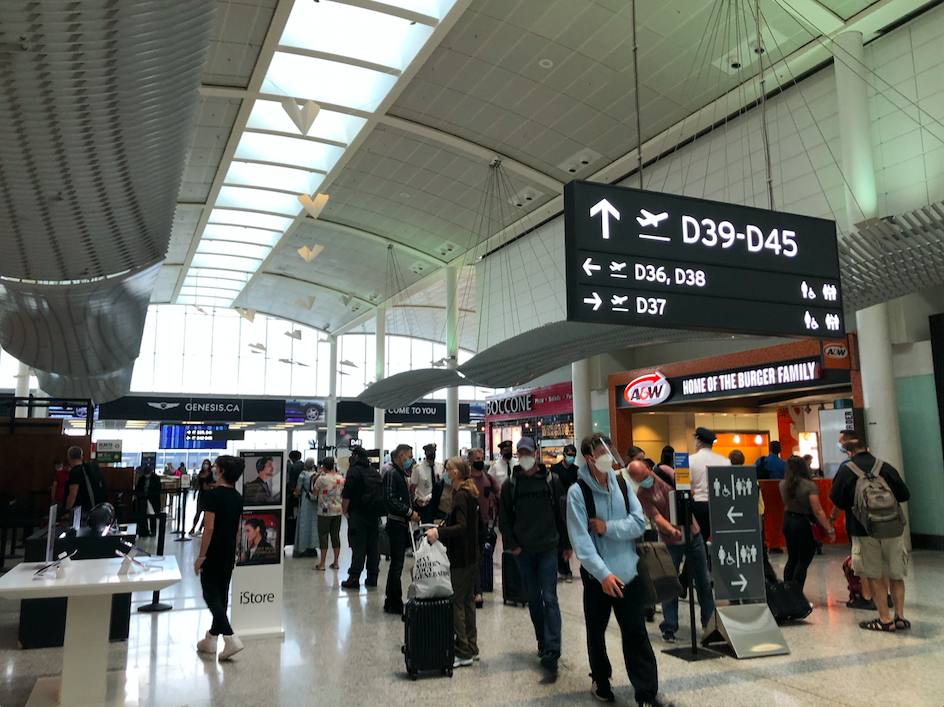 ‘A little nervous:’ One passenger’s reaction to flying in Canada during the pandemic

Since the start of the pandemic, air travel in Canada has dramatically decreased, as people stay closer to home and physically distance to help contain the COVID-19 virus.

But some Canadians are beginning to fly again this summer, often travelling domestically to visit family. Though flying can still be stressful, there are now more guidelines and safety measures in place to ensure travellers are as safe as possible.

“A little nervous,” was how my sister, Nalini Raman-Wilms, described how she felt before her recent flight. She’s flown twice domestically during the pandemic, both times with Air Canada, leaving Vancouver International Airport to see family in other parts of the country.

“(You’re) potentially in close proximity to other people, when you’ve spent the last few months trying to make sure you’re staying distanced,” she said.

“It’s an area where you don’t have as much control over how close you’re going to be to somebody.”

Flying at start of lockdown

Nalini first flew just after Canada locked down in March, and then again over the August long weekend. The safety guidelines that were in place each time were quite different.

On her first flight at the end of March, as Canada was just beginning to grapple with how to handle the spread of the virus, few precautions were in place. Notably face masks were lacking.

“I remember feeling very self-conscious about the fact that I wanted to wear a mask on the plane,” she said, adding that maybe half the people in the airport were wearing masks at the time, and even fewer on her flight.

“I felt a little strange,” she said. “But I knew that I wanted to wear one.”

Nalini remembers that there were concerns over the shortages of masks and other personal protective equipment in the spring, and that public health officials in Canada were not yet recommending people wear masks.

During her flight in March, Nalini also brought her own disinfectant wipes and cleaned her seatbelt and armrests before sitting down. There wasn’t anyone else seated near her, but she said she would have felt compelled to explain why she wanted to clean everything if there had been someone nearby; disinfecting everything wasn’t yet the norm.

Though she said she’d been nervous about flying, afterwards she remembers feeling “quite comfortable” because she didn’t come close to anyone. Since she wasn’t seated near anyone else, she was able to maintain her physical distance from other passengers.

Protocols were quite different, though, when she flew at the beginning of August.

From Vancouver to Toronto

Airports and airlines have had more time to develop safety measures and guidelines, and Nalini noticed several differences this time. The first was an email she received about a week before the flight.

It was “coming to me at a time when I was already a little panicked about flying,” she said, explaining that the experience of travelling during the pandemic is not easy.

The Air Canada email said that her flight may be quite packed, and if she wanted she would be permitted to change her flight. However, the airline couldn’t guarantee that another flight wouldn’t be just as busy.

Nalini thought about changing her flight, but soon realized there weren’t many other options. And she had no way of knowing if the change would make her any better off. In the end, she decided to keep the original flight.

During online check-in, she had to answer a survey asking if she had any symptoms of COVID-19. And it was now mandatory to wear a mask in the airport and for the duration of the flight.

When she arrived at Vancouver International Airport for her evening flight, things were quiet.

“There was actually nobody around,” Nalini said. She has a NEXUS pass — which allows for fast travel through airport security for those who fly frequently — but didn’t need to use it because there were only a few other people going through security.

“It was a bit eerie. The things they’d say over the loudspeaker were about your masks and keeping distance.”

She went through a mandatory temperature screening, which is one of the newest health requirements for anyone flying out of the airport. It was implemented on July 30, only a few days before her flight.

“It was quite simple,” she said. “I walked up to the point, and they asked me to take off my glasses.” She said stood about a metre in front of the machine while they did the check, then they asked her to proceed to security.

Walking around the airport before her flight was a strange experience, though.

“It was a bit eerie,” she said. “I don’t know that I’ve ever seen the Vancouver airport that empty.”

“The things they’d say over the loudspeaker were about your masks and COVID and keeping distance.”

Washrooms were open, but all the water stations were closed. She said she didn’t see many people at the airport until she got to her gate.

“Boarding was a little nerve-wracking,” she said, because there were suddenly lots of people around. It was a large airplane, a 747, and it was pretty busy. They still boarded through zones, which meant they called people seated in the same section to board together.

“The plane was a lot more packed than I would have liked. It was actually very busy,” she said.

While Air Canada initially announced this spring that it wouldn’t book seats next to each other in economy class, the airline ended the distancing policies beginning in July.

Nalini said she thinks most of the middle seats on the flight were actually empty, but that still meant a lot of people packed into a small space. Just like in the airport, everyone on the plane now had to be wearing a mask.

Once again, she had brought her own disinfectant wipes. She sanitized her TV, armrests and seatbelt buckle. “Then I tried not to touch anything the rest of the flight,” she said.

Another change she noticed was that there were now regular announcements reminding people of safety precautions. “They had constant reminders,” she said, noting how they asked everyone to keep their masks on, especially since passengers could be passing each other in the aisle.

There was no food or drink service, but about half an hour into the flight everyone was given a water bottle, along with a package containing hand sanitizer, a mask and disinfectant wipes.

Though the flight was busy, Nalini said she was glad to see that everyone on board seemed to be taking the health concerns seriously.

“Everyone kind of kept to themselves on the plane,” she said, “which was good.”

Getting off the plane at Toronto’s Pearson International Airport, though, meant people standing together in the aisles.

“I actually waited for people to leave, because people were crowding a fair bit,” Nalini said. “I didn’t want to get close to them.”

The Toronto airport was also busy.

“It was actually a bit chaotic,” she explained. “There were people everywhere. Of course everyone was wearing their mask, but there were tons of people.”

Though air travel has slowed drastically over the past few months, Pearson is Canada’s busiest airport — nearly 50 million passengers passed through in 2018, according to its website.

Nalini said she didn’t notice directional arrows on the floor in the big halls to help with physical distancing, and said that people didn’t seem quite as careful about personal space in the busy areas.

But she did notice that everyone was respecting the mask rule, and there were hand sanitizer stations everywhere.

Overall, she said that most people were taking the recommendations seriously, especially on the plane.

“You can tell people are a little paranoid and nervous about it, so everybody pretty much does keep to themselves,” she said.

“Although I was nervous, it’s actually pretty easy to not come into too close contact with people. I realize I’ve probably been closer to people in a grocery store without meaning to.”

In the News: Monday, August 10