2 weeks ago 0 1 min read
We use cookies to provide a personalized experience for our users. By continuing to browse this site, you give consent for cookies to be used.
Got it!
Home > Community > Indigenous > Àbadakone at the National Gallery: ‘Continous Fire’ invites viewers to experience international Indigenous art 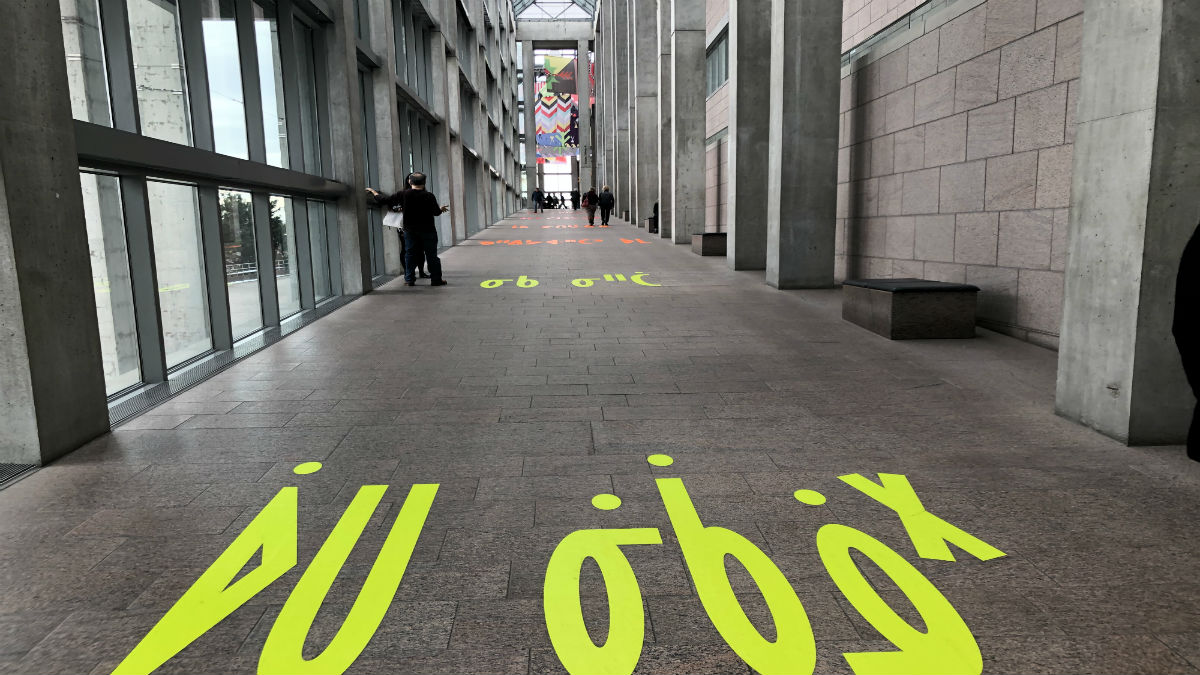 The colonnade to the National Gallery is lined with artwork from Cree artist Joi T. Arcand. The artwork is a text in néhlyawéwin (Plains Cree)and it challenges visitors to recognize Indigenous languages. [Photo © Kayla Christoffer]
Arts & Culture

Àbadakone, the National Gallery of Canada’s new contemporary Indigenous art exhibition is the second to showcase the creativity of artists from dozens of Indigenous nations around the world.

The first show, Sakahàn, in the series happened in 2013 and at least one more exhibition can be expected in coming years.

Àbadakone features about 140 works by more than 70 artists from around the world, including India, Africa, Guatemala, New Zealand and Canada.

The works are in a variety of mediums including performance, photographs and commissioned installations. The exhibition will feature workshops and performances throughout its five-month run.

Àbadakone is an Algonquin word meaning “continuous fire” and was one of the first things decided upon when curators conceived the show. Sakahàn is also Algonquin word for “to light a fire.” It featured works from about 40 different Indigenous nations.

The gallery and all of the National Capital Region is situated on the traditional, unceded territory of the Algonquin people. Elders from one of the Algonquin communities located closest to Ottawa-Gatineau — Kitigan Zibi Anishinabeg near Maniwaki, Que., about 100 kilometres north of Ottawa — have been involved in the exhibition.

Àbadakone features art united by the concepts of continuity, relatedness, and activation. The creations showcase concern for the future while also expressing different ways that artists interpret the world around them.

Àbadakone both figuratively and literally means a continuation of what Sakahàn started, says Rachelle Dickinson, one of the three curators of the exhibit, along with Greg Hill and Christine LaLonde.

“We worked with the Kitigan Zibi language committee in the (community’s) cultural centre. We worked with four elders and we approached them in the summer of last year, and we met with them and talked with them about the show,” says Dickinson. “It was so brilliant that the elders came up with that (title) because they really got on board with what we were hoping to do and what we saw art doing.”

Àbadakone continues conversations started by Sakahàn about what international Indigenous art is.

“What happened with this show that I think is really interesting is that it was more about what community is and what relationships are and how they work through artmaking,” says Dickinson. “We knew that there were regions that we wanted to cover and to think about and to look at, and we knew the types of art that we wanted to think about that we didn’t get a chance to with Sakahàn.”

She added: “We didn’t want the show to be a big boom at the beginning. It has to be an ongoing dialogue.  Not only are we thinking of things to keep going during the run of the show, but also what kind of discussions can be had after.”

Nearly half of the works were produced by Indigenous artists from across Canada.

Hannah Claus, a member of the Tyendinaga Mohawk community near Belleville, has contributed one of her visual pieces, entitled “our minds are one”.

The suspended artwork draws on imagery from the artist’s life as well as the traditional One Spoon wampum belt.

Claus says about her piece: “What I love about installation is the possibility of transforming the space and having people really walk into your ideas and maybe be more open to what you’re trying to communicate that way.”

In recalling the opening of the exhibition, Claus said “they had a welcome ceremony for us before the show opened, so that was really special . . . Different artists shared songs or stories or even gifts, so that was a lovely moment that was for us.”

The exhibition also features commissioned pieces in public spaces that can be seen as soon as visitors enter the gallery, allowing for the exhibition to be experienced by all who visit the downtown tourist attraction.

There will also be performances and talks once a month through the duration of the exhibition. Àbadakone runs until April 2020.

New 'OTTAWA' sign will light up for community tributes