4 days ago 0 3 min read
We use cookies to provide a personalized experience for our users. By continuing to browse this site, you give consent for cookies to be used.
Got it!
Home > Top Stories > Ahead of historic inauguration of new U.S. president, dystopian scenes from a riot-rattled Washington 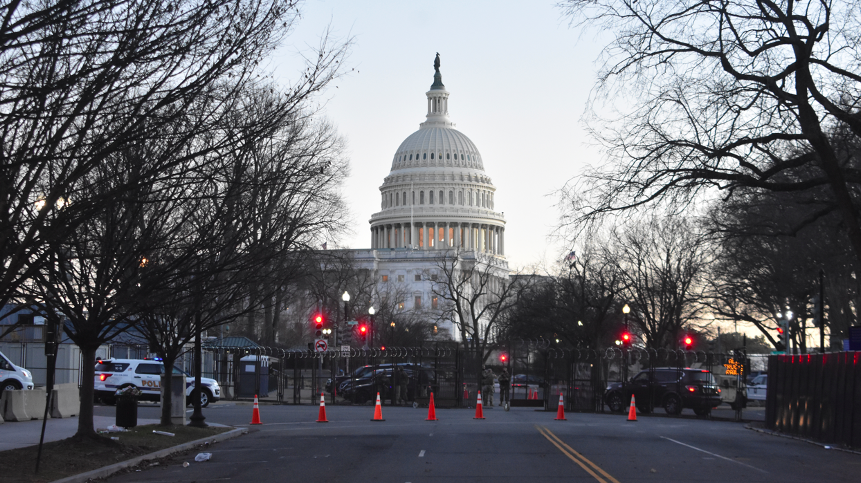 The National Guard has created a fortified perimeter around the entire National Mall — including the Capitol building and the White House — ahead of the Jan. 20 inauguration of U.S President-elect Joe Biden. [Photo © Graham Swaney]
News

Ahead of historic inauguration of new U.S. president, dystopian scenes from a riot-rattled Washington

The threat of renewed violence has been hanging over Washington, D.C. since rioters supporting U.S. President Donald Trump stormed the Capitol building on Jan. 6. On the eve of President-elect Joe Biden’s inauguration on Jan. 20, Capital Current correspondent Graham Swaney captured scenes from the American capital and asked residents what it’s been like — in the midst of the global pandemic — to live with the sweeping security measures that have been implemented since the mob violence two weeks earlier.

WASHINGTON — The occupation of the U.S. Capitol was short-lived, but the tension has persisted in the District of Columbia since Jan. 6. Several thousand National Guardsmen have fortified the southwest part of D.C., creating an eerie empty area that city resident Emeka Mokwunye describes as “dystopian.”

“What we’re all going through now is this constant fear that something else is going to happen,” said Mokwunye. “It just permeates the whole city.”

Mokwunye was working from home when rioters attacked the Capitol building two weeks ago. He remembers watching in horror, but trying not to overreact to avoid scaring his six-year-old son.

According to Mokwunye, residents of the city felt the way they did after the 9/11 terrorist attacks in September 2001 on New York City and the Pentagon — like the city had been “violated.”

Mokwunye said people in his neighbourhood checked in with each other online to make sure nobody was hurt. He didn’t stop watching the news that day until he saw members of Congress reconvene and finish the formal counting the Electoral College votes — confirming the defeat of Donald Trump and the victory of Joe Biden in the November 2020 presidential election.

The strong security presence is creating transit headaches for D.C. residents. Officials have shut down major roadways, bridges, and metro stations. Julio-César Chavez, a Reuters producer based out of Washington, said most residents in southwest D.C. are essentially locked in by roadblocks and other barriers.

The measures have also forced businesses near the National Mall to close since they cannot be accessed. Even outside the restricted area, businesses have covered their windows with plywood to protect against potential damage and will remain closed for the inauguration.

The closures have also affected various federal buildings, but the impact in these instances has been limited since many employees have been teleworking due to the COVID-19 pandemic.

Chavez said newsrooms in Washington have been alert to safety risks, as well, since Trump supporters targeted journalists during the Jan. 6 violence. He said he will wear body armour to cover the inauguration and bring a security assistant to watch his back.

Despite the intense security, Chavez said he is cautiously optimistic that the ceremony marking Biden’s formal installation as the 46th U.S. president will unfold safely. He said the low turnout at planned protests in other state capitals in recent days shows another riot may not happen after all.

What some residents of Washington do say is coming is a racial reckoning. Dennis Chestnut, a Black man living in D.C., said the Jan. 6 riot exemplified how social justice movements like Black Lives Matter have been demonized by police and certain media, while the danger posed by white supremacists — who were prominent among the Jan. 6 rioters — has been downplayed.

Editor’s Note: Carleton University journalism student Graham Swaney has been sheltering with family on the U.S. East Coast. He quarantined and tested negative for COVID-19 twice before traveling to Washington, D.C. ahead of Inauguration Day. Sources were contacted by phone whenever possible and all COVID-19 mask and physical distancing guidelines were observed.