5 days ago 0 3 min read
We use cookies to provide a personalized experience for our users. By continuing to browse this site, you give consent for cookies to be used.
Got it!
Home > Top Stories > Alta Vista leads record-breaking year for coyote sightings 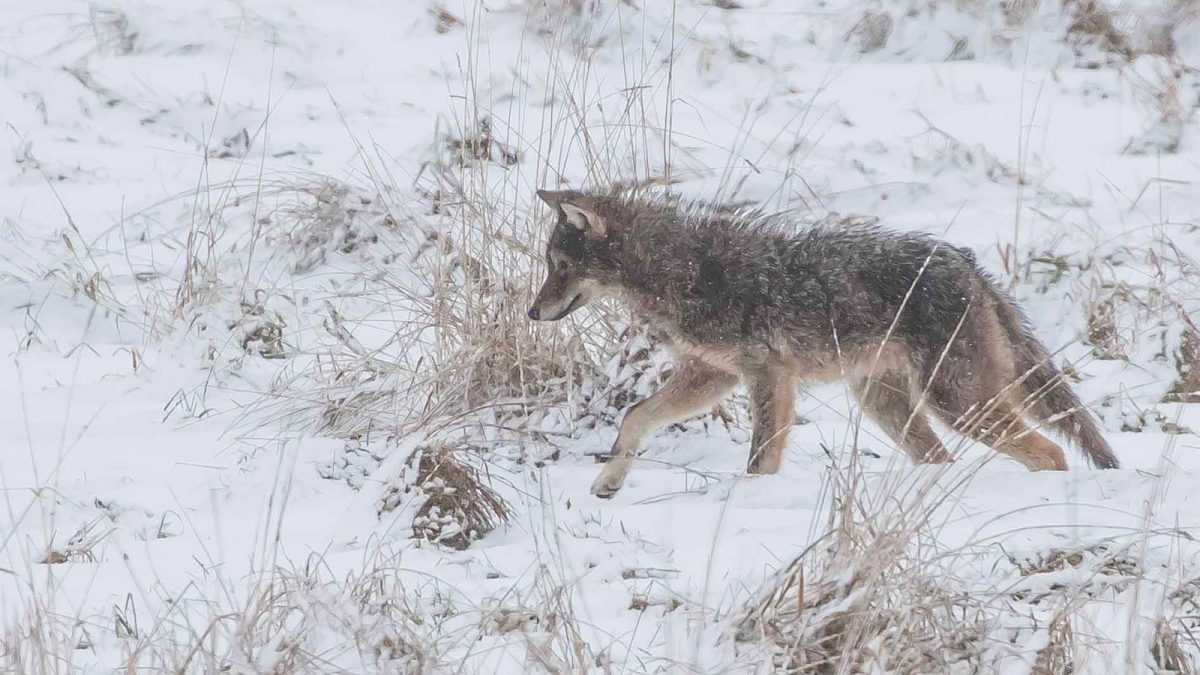 This coyote was photographed on Prince of Wales Drive in December. [Photo courtesy of Michael Runtz]
Environment

Her daughter, Claudia, was walking the family dog one afternoon near the Riverview Park area when she “came face to face with a coyote that looked as if it was going to attack,” said Lang-Dion.

Her daughter picked up the dog, screamed and fled to a neighbour’s house.

Since the distressing incident, Lang-Dion and her neighbours have spotted coyotes several times — and heard their calls late into the night.

“Beautiful sound,” Lang-Dion recalled, “but bone chilling at the same time. You actually start to think, ‘OK, how many of them are actually out there around our neighbourhood?’”

A measure of that can be found in the 310 coyote-related calls the city received in 2018, almost a third of which originated from Alta Vista. While the number of coyotes in Ottawa is difficult to determine, the amount of calls in 2018 was the highest since the city began releasing service call data five years ago.

But it is River Ward — which was responsible for 23 coyote-related calls in 2018 compared to Alta Vista’s 86 — which seems to be doing the most to warn community members about animal sightings. That’s because in August of last year, a coyote attacked a dog in the woods near McCarthy Park, prompting the National Capital Commission to post warning signs at the entrance to McCarthy Woods.

“Where’s our coyote warning signs in Alta Vista? I have never seen any,” said Lang-Dion.

“It is not common NCC practice to install signage on the edge of our wooded areas in urban settings: signage can produce unexpected outcomes including fostering fear among residents,” she wrote.

According to Carleton University naturalist Michael Runtz, people shouldn’t be overly concerned by the presence of coyotes — even during mating season, which begins in February.

“They’re not more aggressive,” he explained in his lab. “They just tend to wander more widely then.”

Runtz said areas which back onto farmland, like Alta Vista, are more likely to see coyotes.

And extreme cold, such as Ottawa has experienced this January, may make their presence more visible because of the added pressure to find food.

“In times of food stress, animals will hunt often beyond their normal hours of hunting,” he said.

Coyotes, normally active at twilight and during the night, may adjust by hunting during the daytime.

It’s also possible that unusual weather patterns may account for more sightings as coyotes are forced to move further into the city to find food — which may include pets.

“If the natural foods are in low supply, coyotes will look more for prey they wouldn’t take as often … like small dogs and cats.”

But Runtz stressed that the risk to humans is minimal.

“The danger in driving to a trail to walk … far exceeds the danger of being attacked by a coyote on the trail,” he said. “I think the best thing to tell people is to keep their pets on leashes. That would be the big thing.”

Runtz’s advice is something River Ward resident Adam Ortner is choosing not to follow, even though he’s noticed the signs in McCarthy Park.

“I’ve read them and they’re definitely useful, especially for more vulnerable people with smaller dogs,” Ortner said. “I don’t know that there’s anything else that can be done other than the signs. It’s the coyotes’ natural habitat.”

Like Ortner, not all Alta Vista residents are concerned by sightings of the creatures.

Even so, Lang-Dion believes there is more that can be done, just in case.

“It should start with getting people together in communities and having a more wholesome conversation about what you can actually do to prepare yourself,” she said.

“Does a human, does a child, does anybody have to get injured before we take real concrete action?”