2 days ago 0 2 min read
We use cookies to provide a personalized experience for our users. By continuing to browse this site, you give consent for cookies to be used.
Got it!
Home > Sports > Around the Bay road race celebrates its 127th birthday — with a virtual version 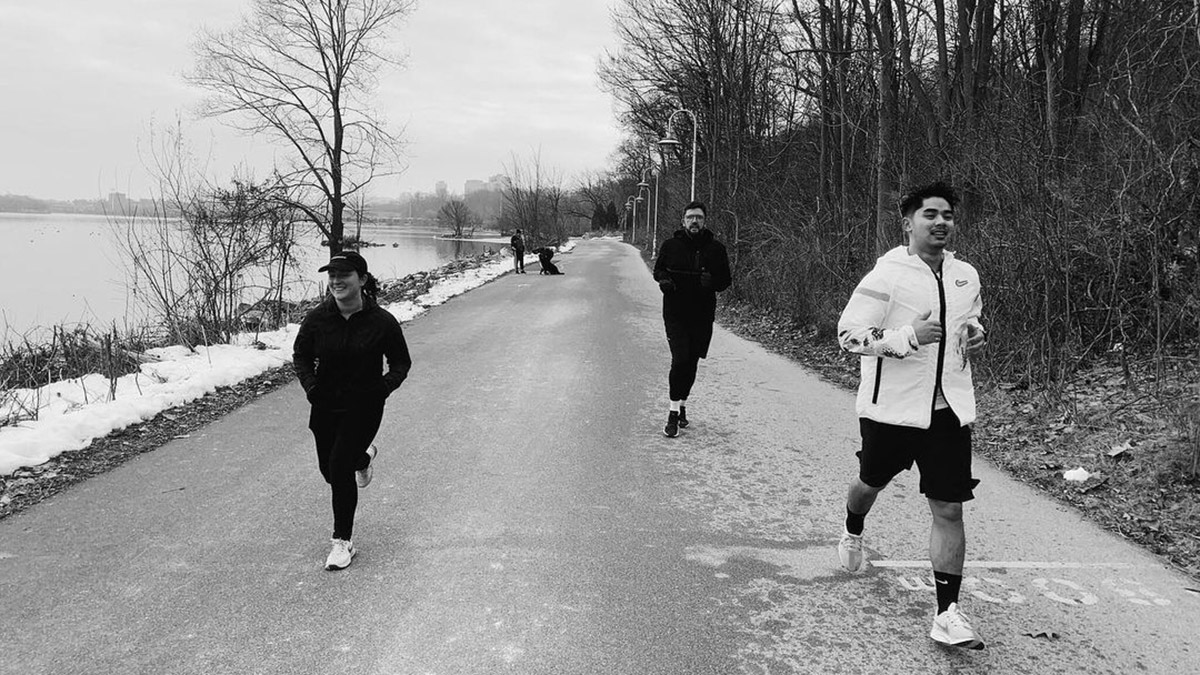 Christina Riczu, left, has been training since January for the Around the Bay run, now under way on the road and online. Here she runs along the Lake Ontario waterfront in Hamilton earlier this past winter. [Photo courtesy Christina Riczu]
News

Christina Riczu has always wanted to run Hamilton’s Around the Bay road race. And she’s doing it this year with a small group of runners in a “virtual” version of the event. She won’t be in the company of thousands on the traditional route along the shore of Hamilton Harbour, at the west end of Lake Ontario.

The race traditionally begins on York Boulevard, west of Bay Street, in downtown Hamilton. Runners head southeast until they curve around a beach all the way to Burlington, and then back along the north shore of Hamilton Harbour to the finish line.

It’s the athletic challenge as well as the history of the event that attracted the 26 year old Hamiltonian to Around the Bay. Excited about her first event, Riczu has been training since January.

There is a catch this year. Organizers says the 2021 edition of Around the Bay as a virtual race because it won’t happen in one place or at one time.

While the race usually happens in March, last year’s Around the Bay was initially postponed because of the pandemic, before being cancelled when it became clear the COVID-19 crisis would be prolonged.

Refunds were not provided to registrants for the 2020 race, but they were given the option of waiting to run the race in person in March 2022, or run the race virtually.

Anna Lewis, Around the Bay’s race director, said 2,000 people are registered for this year’s run, compared to the usual 9,000. “We’re going to make the best virtual experience we can with those 2,000,” said Lewis.

The pre-race preparations this year were much different, she said.

“This time of year, a couple weeks before the race, it’s all about logistics,”  she said. With the shift to virtual this year, the focus is on promoting the event.

“It’s still a very fun race,” she said, emphasizing that the 2021 run will be a unique experience for participants.

The virtual race began March 25 and can take place anytime up to April 25. Participants can run the traditional 30 kilometres, but in reality runners can cover any route they like, anywhere in the world — not just in Hamilton.

Lewis said this year has stirred a mix of emotions, but after making the decision to go virtual, preparing for the race became a more positive experience.

“You kind of get excited. We have a goal in mind, a purpose, and we can focus on the virtual race and how we are going to make it successful,” she said.

She said hallmarks of the race experience from years past are moving online, including virtual messages of encouragement from traditional supporters along the route, such as Captain Obvious and the Grim Reaper.

The Around the Bay Grim Reaper usually stands outside the Hamilton Cemetery on York Boulevard, at the 28-km mark. He typically teases and taunts the passing runners, and has been doing so for more than 20 years. He said his hands get sore by the end of the race from all the high-fives given out.

“Some people hate me. Some people avoid me,” said the Grim Reaper in a telephone interview. He declined to be identified by his real name. “Some people are almost scared by me, but it’s really all in a bit of a jest, fairly lighthearted, to try to push people those last few kilometres, and hopefully not kill them.”

This year, to accommodate the move to virtual, the Grim Reaper said he is recording videos of encouragement, which will be shared with Lewis to post online, as well as on the official Facebook page of the Around the Bay Grim Reaper.

Other traditions, such as swag bags with T-shirts for participants, are being distributed via a virtual expo, as opposed to an in-person walkaround, said Lewis. Participants can pick up their kit from one of the Running Room stores in Hamilton after completing the race.

For Riczu, however, just completing the race is the real prize: “It’s not about the medals or any of that sort of stuff,” she said. “I know that I’ve wanted to do this race for a while.”

Riczu said it’s been difficult to stay motivated when training alone for a virtual race, but credits fellow members of Air Up There — a Hamilton running club — for sustaining her. “Without this, I don’t think I’d be able to run this right now.”

The most difficult “leg” of the race for Riczu are the rolling hills after the 22-km mark of the traditional route, along Northshore Boulevard and Plains Road. “It’s basically a bunch of rolling hills in Burlington,” said Riczu. “I didn’t realize Burlington even had hills!”

However, Riczu said running in Hamilton had readied her to enjoy training on hills: “You can’t run any direction in Hamilton without encountering a hill.”

“I’m definitely going to remember the pain of the hills at the end,” she said. “You kind of make friends with your legs and how much pain they’re going to be in.”

In The News: Thursday, April 22

City’s Paint It Up! program embarks on a ‘totally COVID’ year