1 week ago 0 9 min read
We use cookies to provide a personalized experience for our users. By continuing to browse this site, you give consent for cookies to be used.
Got it!
Home > News > Ottawa > Ottawa artists express relief as in-person art show returns amid pandemic 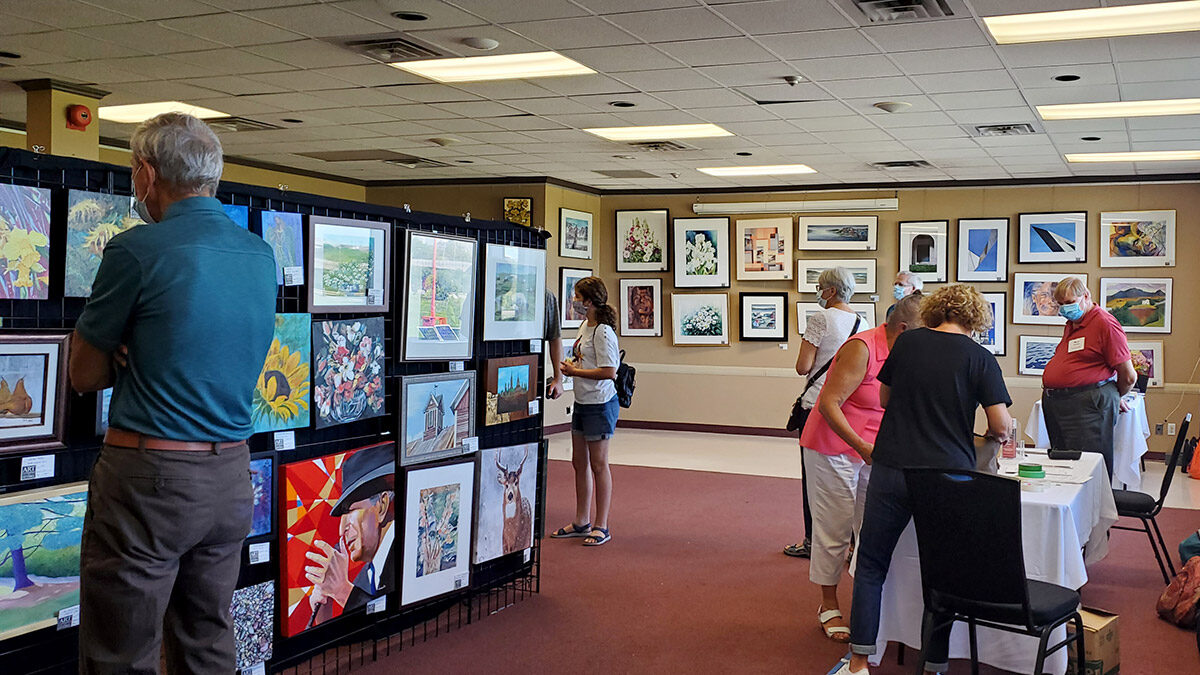 Guests observe the paintings on display at the RA Centre during the first Art Lending of Ottawa show since the pandemic was declared in March 2020. [Photo © Austin Steeves]
Arts & Culture

By Jonathan Tovell and Austin Steeves, 4 months ago 0 8 min read

Local artists say they were happy to be back displaying, selling and lending their work in a live show as an Ottawa non-profit group held its first in-person exhibit since the start of the COVID-19 pandemic.

Art Lending of Ottawa showcased art available to buy, rent or lease-to-purchase on Sept. 18. Sixty visitors came to the RA Centre on Riverside Drive to see works by 28 artists — a good start given the safety restrictions, said the group’s president, Linda Bordage.

The first in-person show follows more than a year of creating artwork while navigating the pandemic’s isolation and financial challenges. It was important for the artists to share their artwork and outlook on the world to an in-person audience, said Anne Remmer Thompson, an artist and past president of Art Lending.

“I think every artist felt relieved that their work once again was out in physical display,” Thompson said.

“You’re meeting with the onlookers, you’re getting their input about the work or about the show or exhibition, and it’s much more meaningful that way,” she said.

Thompson said the executives at Art Lending debated whether it was the right time to return to the RA Centre or wait for a clearer picture of the fourth wave of COVID-19 in Ontario. Despite that reluctance, the show went ahead with contact tracing protocols, physical distancing and capacity limits.

“We’re trying this out now because at the very moment we can do this,” Thompson said. “By Christmas, who knows where the province will be.”

The event also featured the Art Lending debut of seven artists — including woodworker Ben Gatien, a software designer by day.

“I was really happy to take out these pieces that have been sitting in my basement and actually show them to people,” Gatien said. “Some of the nicest things I’ve ever made are sitting in a box in my basement for the past year and a half. It’s nice to take them out and put them where people appreciate them.”

“The artists are all different,” Bordage said. “Some artists are very specific, some are very modern; you’ve got photographers here. So you learn a little bit from everybody.

“Like this wood stuff. I’ve never seen that before — that’s new,” said Bordage, referring to Gatien’s woodworking. “So how did he do that, how did he make that wheel?”

Gatien had the answer.

“I do a lot of the design on the computer, and then I cut most of the pieces with a laser cutter,” he said. “I started with a little hobby laser cutter, just small, and now I have a really big laser cutter.”

Art Lending has been offering artwork online with curbside pickup in response to the pandemic’s travel restrictions. Although it may reach different audiences who would not normally attend a live show, the art does not present the same way as it does in person, Thompson said.

“If a painting’s monumental and huge and you’re on your little device, it’s not going to have that same impact,” she said. “Conversely, if a painting’s a little tiny thing and delicate, intricate and trying to draw you in, once again — online, you’re not going to get that.”

“Online sort of doesn’t give that same oomph as the show does,” said John Craig, a photographer who specializes in wildlife and nature.

Online displays and virtual storefronts did present an alternative way for artists to broaden their reach when health restrictions also shut down galleries in Canadian art hubs such as Montreal and Vancouver.

Along with the group’s website, Craig said he relied on selling his art on Etsy, an e-commerce site that features handmade items and gifts, since in-person sales had dropped to zero up to that point in the pandemic. The virtual shop delivers items across North America and Europe. Since his debut on Etsy in 2016, Craig said he believes he has sold more artwork online during the pandemic than in past years.

Since more people worked from home during lockdowns, Thompson said it was funny to see a pattern develop in her online sales.

“A lot of the paintings — well, I know for myself, the paintings that were bought were for Zoom calls,” Thompson said. “People wanted the wall behind their head when they were having their Zoom calls to not look boring, to enhance them.”

Thompson said she thinks Art Lending — even after the pandemic is over — will continue offering the online option to buy or rent work from the group.

Photographer David Becker has a special appreciation for the online marketplace. He helped develop the site and was a broker of sorts for art exchanges during the pandemic.

“I would get a request for a picture from a client and I would contact the artist to make sure it was available, and if it was, I’d get (the artist) to bring it to my home,” Becker explained. “And then I’d get the client to come pick it up from my home.”

For Gatien, the added time spent in the studio during the pandemic has offered the chance to explore new materials as he honed in on the innovative art of laser-cut woodworking. Gatien’s technical artwork adds to an existing array of art styles and media at Art Lending.

Gatien initially took up painting in his 20s, when the stresses of daily work led him to seek more relaxing pursuits. “I was working too hard,” Gatien said. “I was putting in really long hours at work and I needed to find a hobby.”

Becoming a father of four children made painting too time-consuming and messy.

“As soon as I took out my paints, the kids would say ‘I want to paint too,'” Gatien said. “Paint would get everywhere — there was nothing relaxing about it. So with woodworking I’ll be there in my little shop and my kids come in there with me and it’s relaxing.”

Thompson and her husband have travelled a lot during his retirement. She said she finds many inspirations for her watercolour paintings along the way.

“I’m trying to search for beauty, mainly because the world’s become so very nasty out there,” said Thompson, the past president of the Ottawa Watercolour Society.

“I just need to calm down and to breathe and to say, ‘Wow, this world has so much in this life to offer,’ just as an antidote to some of the other things — the political things and the weather and the climate, you name it,” said Thompson.

Thompson said she painted less in the depths of COVID-19 travel restrictions as she bubbled with family and grandchildren. She still found time to create seascapes and tranquil settings with watercolour paint, which gives an organic feel.

“That helps me with my own particular anxieties over COVID and all the problems that have ensued because of it,” Thompson said.

A key challenge facing artists during the pandemic has been financial sustainability. Thompson said she applied to the Canada Emergency Response Benefit for months when she did not sell much art. Other than that, she said artists without steady incomes did not have many options.

The City of Ottawa acknowledged in an email that the pandemic has been especially difficult for artists. But Dan Chenier, the city’s general manager of recreation, cultural and facility services, said financial support has been available.

“Funding programs continued to support individual artists, collectives and organizations throughout the pandemic, so groups could continue to support artists and cultural workers, maintain cultural venues, and support the shift to virtual programs and smaller physically-distanced activities,” Chenier said in an email.

“I encourage people to come and have a look,” he said. “The organization has been around many, many years — in fact we celebrated our 50th anniversary last year. I think it’s a tribute to the artists that we have been around that long.”

‘Panda-monium': Police release images of persons of interest in the destructive post-game party in Sandy Hill