1 week ago 0 1 min read
We use cookies to provide a personalized experience for our users. By continuing to browse this site, you give consent for cookies to be used.
Got it!
Home > News > Development > Artists worry they’ll be displaced by redevelopment of historic Hintonburg bakery 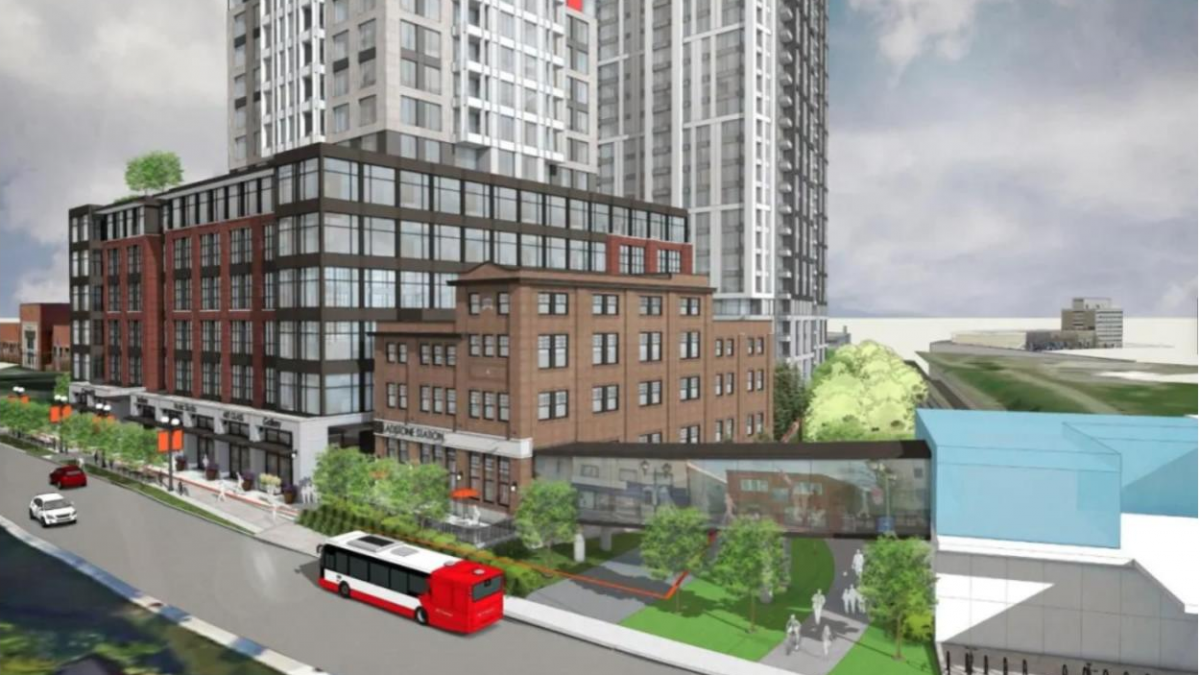 View of the redevelopment design of 951 Gladstone Avenue and adjacent properties. The bi-level brick building close to the bus is the current home of the Enriched Bread Artists co-operative and was originally a bread factory for Ottawa’s famous Morrison Lamothe bakery. [Illustration © Fotenn and Trinity Development Group]
Arts & Culture

The former Standard Bread Company in Hintonburg — a century-old brick building with a rich history — is set to become a designated heritage site ahead of a massive redevelopment that could displace a popular artists’ cooperative.

Members of the Enriched Bread Artists say they are concerned that the proposed plan to redevelop 951 Gladstone Ave. and the surrounding lands could end a decades-old arrangement in which sculptors and painters rented studios in the former bread factory.

The building, erected in 1924 by Ottawa’s famous Morrison Lamothe bakery company, became the EBA’s home in the 1990s after a group of artists moved into the abandoned structure.

The first bid to designate the building was in January 2010 by the Hintonburg Community Association. The property was sold shortly after the heritage proposal was made, so the HCA’s request was put on hold.

City of Ottawa heritage planner Lesley Collins said this is her longest running file, having researched the history of the building for nearly a decade.

Architect Sydney Comber, also known as “The Bakitect”, designed the Gladstone Avenue building as well as other bakeries and dairy factories across Canada in the early 20th century.

“Bread was baked and sold from the warehouse building and delivered around Ottawa by horse and cart,” said Collins.

Part of the planned redevelopment involves building an LRT station next to the building, which is situated just west of the O-Train line and short walk to the heart of Little Italy at the corner of Gladstone and Preston Street.

The City of Ottawa is encouraging the construction of major residential projects near transit hubs because intensifying the downtown population reduces urban sprawl and the need for high-carbon commuting from the suburbs to the urban core office district.

“Building housing right next to transit is the appeal that the councillors feel there is pressure on them to OK,” said Cindy Stelmackowich, an artist at EBA who has rented space there on and off for almost 20 years.

The plan to designate 951 Gladstone Ave. as a heritage site — and to preserve the historic building as part of the huge redevelopment scheme — was formally initiated at a recent heritage committee meeting at city hall.

But Stelmackowich said the EBA wasn’t informed about it, and now there are concerns among the artists about their fate when the redevelopment goes ahead.

“I dropped the ball this time. I apologize”, said Linda Hoad of the Hintonburg Community Association. She said she usually does keep the EBA informed about updates at city hall with regard to planned changes to the building and the area around it.

Trinity Development Group already owns the property and the surrounding land, which stretches from the EBA building to a number of other commercial properties along nearby Loretta Avenue. Trinity eventually plans to building three high-rise towers with hundreds of residential units, as well as various retail and office spaces, within the development zone.

“We have to negotiate our lease in a year and a half,” said Stelmackowich. “And it could be, A:  no negotiation, or the terms could be — who knows?”

The Gladstone-Loretta area has several other businesses that would be affected by the redevelopment, including DeFalco’s for Brewers and Winemakers, LOAM Clay Studio and Northern Art Glass.

“A lot of people know about the redevelopment here,” said DeFalco’s employee Justin Popplewell. “So they are already aware that there is the potential that we do have to move locations. But in the end, we would have to stop making wine and then have everyone bottle their wine so we can get rid of it all — and then start over again essentially.”

When the redevelopment plans were first shown to EBA by Trinity, there was an idea to retain an arts hub in the new complex of buildings, said Stemackowich.

Nevertheless, said Stemackowich, there’s concern that the development could ultimately force the artists to relocate.

A city report on the proposed heritage designation states that the property owner is planning “a mixed-use, transit-oriented development with office, retail and residential uses in three high rise towers. The development proposal includes the retention and adaptive reuse of the Standard Bread Company Bakery.”

The report also states that Trinity is aware of the proposed heritage designation and is not opposed to it.

A November 2018 report on the proposed development prepared for Trinity by consultants Fotenn Planning + Design stated that the project “has been designed to mitigate impacts on the nearby residential areas and to respect the character of the existing area.”

But gentrification is a major issue throughout Hintonburg, said Stelmackowich.

“The artists come in, make it cool, make it trendy in these dilapidated buildings — and then some big developer just comes and takes it all away,” she said.

“We actually owe these artists”, added Hoad. If not for the EBA occupying the space, she noted, the building would have been demolished a long time ago and wouldn’t have had the opportunity to become a designated heritage building.

The building’s proposed heritage designation will be considered by the city’s planning committee and full city council in January.

Thrifting as gifting: A shift towards more sustainable shopping practices