3 days ago 0 4 min read
We use cookies to provide a personalized experience for our users. By continuing to browse this site, you give consent for cookies to be used.
Got it!
Home > Community > Bank Street BIA’s app project augments the reality of exploring downtown murals 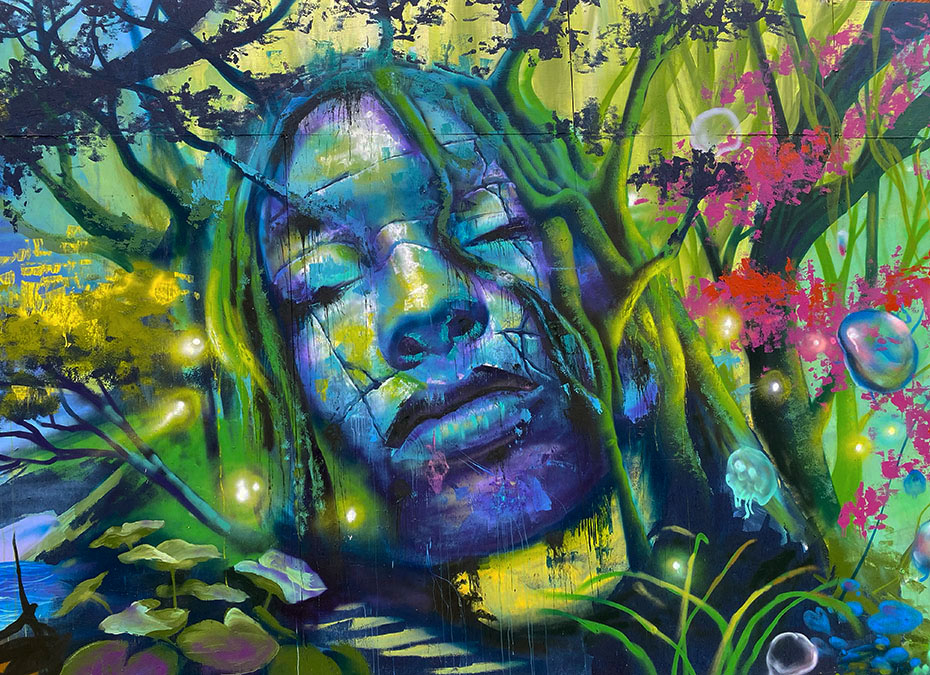 Let's Keep Growing, a mural on Bank Street by Kalkidan Assefa, Allan Andre and Jimmy Baptise, is one of the works showcased in a special app available until Nov. 6 to help visitors to the retail district appreciate its artistic offereings. [Photo © Menna Nayel]
Arts & Culture

The Bank Street merchants’ association has been offering visitors an enhanced experience of the retail district’s artistic attractions through an app that celebrates downtown murals with augmented reality.

Organized by the Bank Street Business Improvement Area and XR Studios, “Beyond the Art — Augmented Digital Experience” is an opportunity to explore and engage with the 16 murals along Bank between Parliament Hill and the Queensway.

The project encourages people to walk along the street and explore its arts and culture through an audio-visual tour.

Until Nov. 6, visitors can download the app EngageArt to navigate around Bank Street and find murals created by artists in recent years under a BIA program.

The app has a bilingual audio feature and an augmented reality (AR) component. In both French and English, the audio feature explains the meaning and inspiration behind the murals while the AR feature allows users to play games that are activated by the murals along the way. In total, there are 16 murals scattered along the Bank Street corridor, five of which have the AR feature.

SabriNa C. Lemay, assistant director of the Downtown Bank Street BIA, said the project is part of revitalizing the area as the city slowly emerges from the pandemic.

“Because we haven’t really done a lot during COVID, and specifically Bank Street is known for its events, we were looking to create something innovative,” said Lemay. “It’s COVID-friendly, COVID-safe. You can experience it on your own, you can experience it with a friend. All you need is your personal mobile device.”

Lemay said that all the artists were hired to produce their creations by the Bank Street BIA.

“We connected with the artist . . . We asked them what their inspiration was behind their murals and then we integrated them to the app,” said Lemay. “We shared that with XR Studios, so when they understood the inspiration behind the mural itself, they then decided how they would create the augmented reality.”

Let’s Keep Growing is a mural by Kalkidan Assefa, Allan Andre, and Jimmy Baptise. Commissioned by the BIA, the three artists teamed up and created the artwork near the intersection of Nepean Street and Bank. The mural’s vibrant colours of the sea — intermingled blues and greens, including a giant turtle — demand the attention of everyone who passes by.

Along with the colorful visuals of the mural, the audio feature explains: “With the arrival of spring and the relaxation of restrictions, a request for green art sparked the idea of reviving the city through the theme of nature. The mural represents liberating freedom found in nature and shows us that we can all grow together.”

Through the mural’s AR feature, users collect earth, water, seed and light. Once they are all collected, users can plant and grow a tree.

Into My Imagination, by Dom Laporte and Dan Metcalfe, is hidden on the side of a building located on Cooper Street near Bank. The mural shows a young woman holding a book with octopus tentacles and bubbles emerging from it. The painting is described as having been created to “represent a surreal and dreamlike experience for the young girl.”

The audio element urges users to visit some of the local businesses they may pass on their route to the next mural.

“A huge part of (the app project) is to integrate the community and invite them to come down to Bank Street,” said Lemay. “And while you’re down here, come visit the local businesses because, obviously, during the pandemic they have all suffered.”