2 days ago 0 2 min read
We use cookies to provide a personalized experience for our users. By continuing to browse this site, you give consent for cookies to be used.
Got it!
Home > Life > Barrhaven braces for change sparked by new downtown core 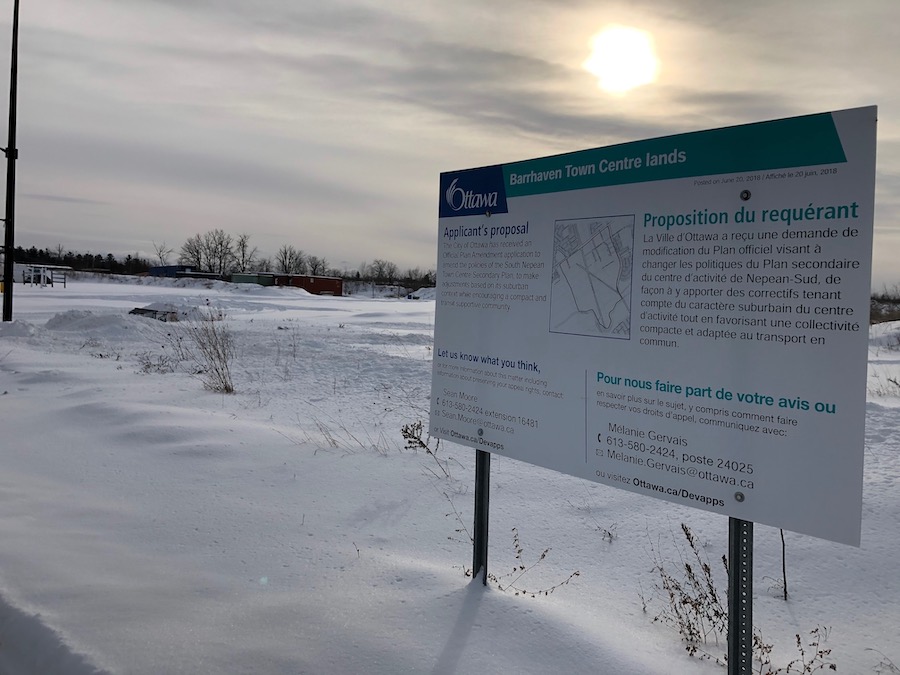 This sign is presenting information about a new downtown core development in Barrhaven. The sign is located on the site. [Photo © Kindra Squire]
Business

Barrhaven residents have some mixed feelings what is about to be their new and approved ‘downtown core.’

The plan, approved by city council in December, is expected to create up to 12,600 jobs in the core and 11,000 dwelling units says Coun. Jan Harder.

“In the heart of it will be a civic complex which will act as a gathering space for future community events,” she said.

The core will be built behind an existing business area that includes a Walmart, Staples and a movie theatre. Much of the development is in a large field off Riocan Drive. Included is a park along the Jock River, an underground park and ride for public transit, a library, a performing arts centre and if Harder gets her wish, an outdoor winter skating rink.

“The main idea is to make it a space where residents can go for a night out and feel like they are in a downtown core which resembles a Hallmark movie,” Harder says.

Harder says she has been sharing information about the plan in a weekly newsletter as well as on her social media feeds. After the plan was released, she filmed and shared a video on the site of the future downtown explaining where development is to take place and what it will include. The video is located on her YouTube page.

She also plans on hosting an event in the spring along with the Barrhaven BIA to give an overview of the project.

Kelsey Bradley, 34, is a lifelong resident of Barrhaven. Her family has lived there for her whole life. She works in retail within the boundary of the new downtown core would be.

“I find that the more that Barrhaven grows, the less it is the friendly community I remember,” she says. “I’m not a huge fan of Barrhaven’s growth overall.”

Bradley says that since the growth of Barrhaven seemingly cannot be stopped, she would not mind having an area like the core as long as it “really does have the look and feel they say it will.”

Bikram Jeet Singh is in his mid-30s and has been in Barrhaven for four months since moving from Dubai. Before moving to Ottawa, Singh used to work in a jean factory. He joined family members who arrived in Barrhaven ahead of him and he also brought his daughter along. He is working in retail, however he says he will take any job that will allow him to provide for his family.

He says that expanding Barrhaven with this core is needed. Since Barrhaven is mostly residential, adding this downtown centrepiece will create more employment. “Second, with a downtown there will be more roads, and roads will be widened which is very much required.”

Harder says in her video that some of the employment space “will be a magnet, for jobs where people who work for federal government will be able to stay in the community and have a place to work out of that is safe and secure.”

Singh also says that Barrhaven is the only place for Ottawa to grow since “we can’t grow eastward or westward, so we must grow South, which is Barrhaven.”