2 weeks ago 0 9 min read
We use cookies to provide a personalized experience for our users. By continuing to browse this site, you give consent for cookies to be used.
Got it!
Home > News > Ottawa > Bike Ottawa urges city to invest in better plan for Pretoria Avenue cycling route, link to canal network 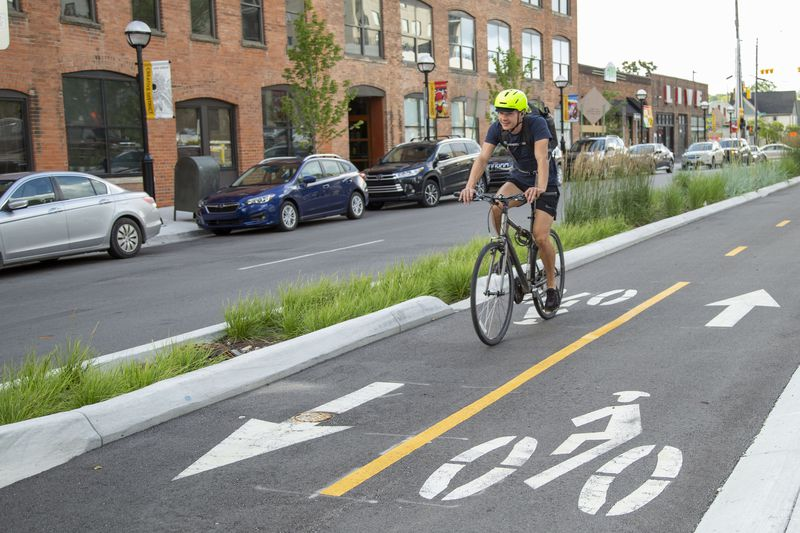 This bi-directional cycling route runs along a one-way street in Ann Arbor, Michigan. Bike Ottawa says this kind of infrastructure along Pretoria Avenue — instead of the current changes planned by the City of Ottawa — would represent a major improvement in cycling safety in the downtown area, and could connect cyclists to the major pathways on either side of the Rideau Canal. [Photo courtesy Bike Ottawa via mlive]
Community

Bike Ottawa is applauding some aspects of a City of Ottawa plan to improve cycling and pedestrian routes as part of a project to upgrade sewer infrastructure along Pretoria Avenue just south of the Queensway across the Rideau Canal.

But the group says the changes need to go farther to truly improve cycling safety.

In a blog post about the project, which the city has said will be completed between Bank and Metcalfe streets next year, Bike Ottawa said: “We are excited for the possibilities with these improvements.”

If the design is properly executed, the cycling advocacy group said, the changes would make the popular pathways along the Canal easier to access.

There is currently no dedicated east-west biking route in the busy area, so for pedestrians and cyclists “this could make a huge difference,” said Bike Ottawa.

But the group also says the city could be missing an opportunity to establish a safe cycling corridor to Pretoria Bridge, one of few crossings between Queen Elizabeth Driveway on the west side and Colonel By Drive to the east.

“If they extend one block further east and a safe crossing of Queen Elizabeth were added, people could bike safely and comfortably from Bank Street all the way to the Canal’s network,” said Bike Ottawa, urging the city to fill in this missing piece.

“Completing this link will enable many people on bikes to access the Canal safely.”

That’s not the only issue raised regarding the planned project.

“At the moment, the city has proposed largely on-street bike lanes,” said William van Geest of Bike Ottawa’s advocacy working group. “For them this means a bit of paint on the road, and when it comes down to it, paint won’t protect people.”

Regarding the proposed cycling lane itself, “the City has only discussed the possibility of a one-way bike facility, in the direction of car traffic,” the group noted.

Intersections can be dangerous for cyclists and those walking, so Bike Ottawa said it is grateful for the proposed protection at the crossings on Pretoria.

“But people biking also need protection in between intersections,” said the group. “Moreover, on-road facilities usually collect snow in the winter, which forces people on bikes into car traffic.”

The group has proposed two possible solutions, both of which involve two-way bicycle routes.

The first would see a bi-directional cycling route along the length of the corridor.

According to Bike Canada, “this solution narrows the roadway, which research has shown helps reduce motorists’ speed and makes the area safer for everyone, including motorists.”

The second proposed solution is a “contraflow” cycling route.

A contraflow facility, according to the Ontario Traffic Manual is, “a bicycle lane that operates in the opposite direction of motor vehicle traffic.” This would enable two-way bicycle travel on a road that has one-way operation for cars.

Contraflow bicycle lanes can be separated from vehicle lanes by a painted line, a buffer or by a form of physical separation.

“This is the safest option for everyone. But if proper traffic-calming measures are added to a point where people of all ages can bike safely and comfortably in the street, this would be acceptable, too,” said the group.

Although a fully bi-directional cycling route would create more work for transportation planners, said van Geest, “proper bike infrastructure is a great investment for the city. And we also have to acknowledge that this is a timely matter — how many times are you going to rip up an entire street?”

He added: “If you’re going to create a new bicycle facility, it has to be safe, so it’s almost not worth it just to paint a line and say a prayer.”

Van Geest expects to hear the city’s response to Bike Ottawa’s proposals within the next month.