5 days ago 0 6 min read
We use cookies to provide a personalized experience for our users. By continuing to browse this site, you give consent for cookies to be used.
Got it!
Home > News > Ottawa > Bytown Museum reopens after two years of adapting online 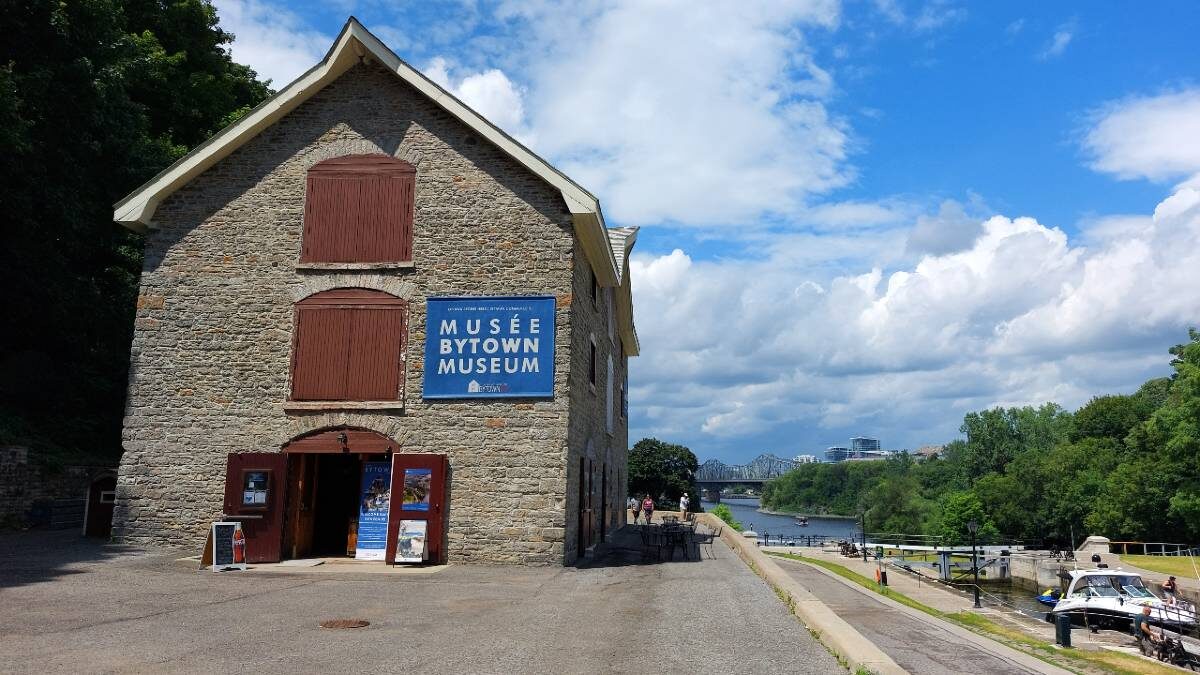 The overcast day with occasional showers didn't stop visitors from seeing the Bytown Museum as it opened to the public for the first time since March 2020. [Photo © Jonathan Tovell]
Community

In March 2020, Grant Vogl, the senior manager of collections and exhibitions at the museum printed a sign for the Bytown Museum’s window box notifying passersby of the building’s temporary closure.

He knew what to do on Thursday when the museum opened for the first time since it closed due to COVID-19 measures more than two years ago.

“The first thing I did was get the key, open that box, take that sign down and put it in the shredder,” Vogl said.

After shifting to virtual content during the museum’s closure, families, couples and individuals were once again able to browse the three floors of the Commissariat – Ottawa’s oldest existing stone building.

Tour guides answered questions about artifacts and told tales about the colonial history of the building – including how a lost barrel of silver coins led to workers on the Rideau Canal getting double rations of rum from the vault.

“To bring in this piece of opening the doors and welcoming people back inside, it feels great,” said Courtney Gehling, executive director of the Bytown Museum. “We’re a community at our heart and we’re here for the community.”

Gehling said the staff adapted the online programming through multiple phases of the pandemic, as the length of the building closure became clearer.

The museum’s Zoom lecture series and roundtable discussions allowed staff to hear from groups such as the Italian and Somali communities, woman leaders in museums and Algonquin leaders who talked about truth and reconciliation in museums, she said.

“[We were] really engaging with the diverse communities of Ottawa to say, ‘What do you need and how can we support you?’” Gehling said. “That was really an incredible experience that came out of the pandemic that maybe wasn’t there beforehand.”

Vogl is the the only current employee who worked for the museum before the start of the pandemic. He said as everyone was getting ready to reopen, they trained new summer workers and also retrained existing staff about the in-person protocols and programming.

“Finally landing on today is a pretty big deal for us,” Vogl said.

In April 2020, he said he installed a temporary exhibition featuring paintings from the museum’s collection.

“It had been planned for that summer and I thought, ‘Everyone’s saying two weeks, it might not be that but hopefully by the summer, everything’s OK and we can reopen,” and of course, everyone knows what happened,” Vogl said.

Vogl said the museum’s virtual tour covered the temporary galleries, but it’s exciting to have visitors see everything up close.

“To me, seeing a picture of an artifact versus standing in front of it are two completely different things,” Vogl said. “You can go on Google and look up a picture of just about anything, but if you’re standing in the oldest building, you can see the stonework of the walls and the beams and you can actually see the artifacts within a context.”

Returning to the museum is another learning opportunity for the staff, said summer guide and architectural history student at Carleton University, Nicholas Litardi.

“Working in the oldest building in Ottawa is a pleasure and an honour, seeing how buildings have changed over the years from the timber frame to the solid stone walls in the vault,” Litardi said. “It’s a boon to my studies.”

The museum staff said they want to challenge the characterization of Ottawa as a tired, government town by residents, newcomers and tourists now and moving forward.

“We have quite rambunctious roots,” Gehling said. “Bytown was known as notoriously being quite rowdy and so the early days of Bytown were by no means the sleepy Ottawa.”

The non-profit museum is open Wednesdays to Sundays from 10 a.m. to 4 p.m. Admission is $8 per adult, $5 for seniors and students, $2 for children under 12 years old and $18 for the family. Children under two years old are free.