2 weeks ago 0 1 min read
We use cookies to provide a personalized experience for our users. By continuing to browse this site, you give consent for cookies to be used.
Got it!
Home > Health > Women > Byward Market plaque honours ‘remarkable life’ of Mother Marie 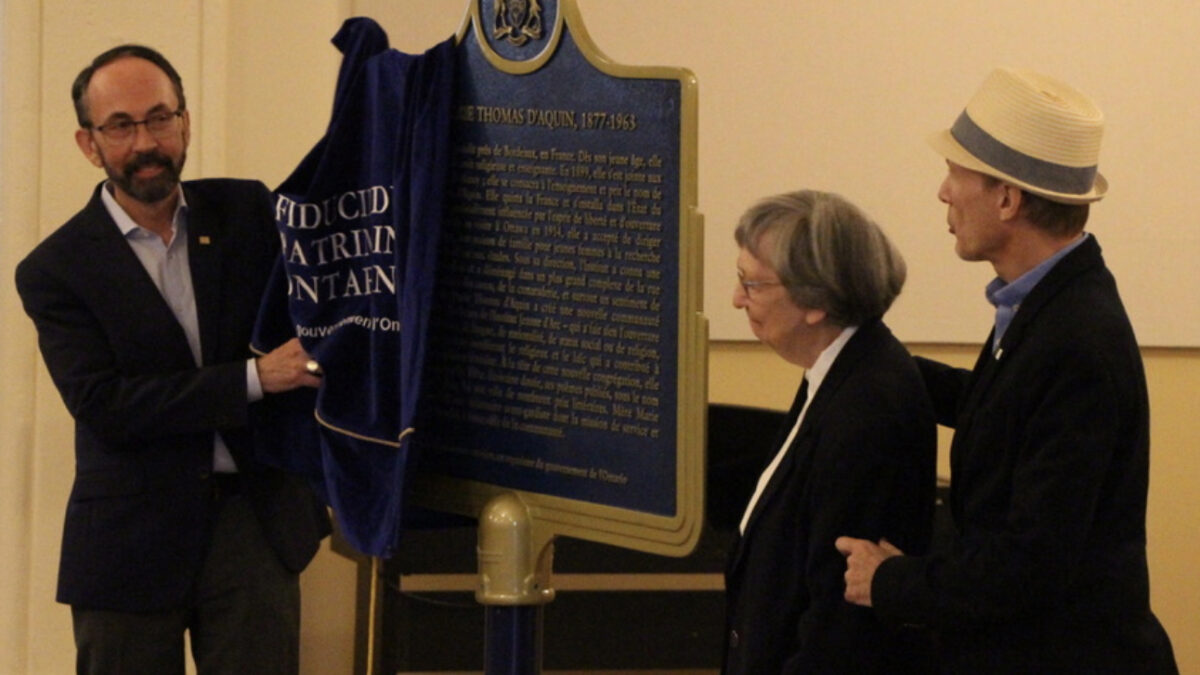 The Ontario Heritage Trust has erected a plaque in the ByWard Market honouring Mother Marie Thomas d’Aquin, a leading figure in the francophone and Catholic communities in 20th century Ottawa.

The plaque was recently unveiled at a ceremony commemorating the founder of the Joan of Arc Institute (l’Institut Jeanne d’Arc), the only francophone women’s order in Ontario.

The plaque, with an inscription in French and English, pays tribute to d’Aquin for her contributions to the Lowertown community and her special devotion to improving the lives of women.

“From a young age, she felt called to become a nun and teacher,” reads the plaque, which describes d’Aquin as a leader whose order “embraced openness without distinction for race, language, nationality, social status or religion.”

Born in 1877 as Jeanne Lydia Branda in Bordeaux, France, the future Mother Marie moved to Ottawa in 1914. She founded the Joan of Arc Institute, a Catholic order with a focus on providing social support and quality education for young women.

The institute was known as a home away from home for young women from around the globe, from all different backgrounds and religions, as they searched for work, obtained language training and studied at university.

At the height of the institute’s influence in the 1960s, there were nearly 150 sisters in the order. It closed in 1991 following a gradual decline in recruitment.

The institute’s original home was on Sussex Drive and is now a designated heritage building.

“Among her many achievements, Mother Marie Thomas d’Aquin made significant contributions to the social, economic and educational well-being of women,” said John Ecker, chair of the Ontario Heritage Trust.

“She lived a remarkable life of faith and service, working directly in the heart of her community and caring unconditionally for her congregation and beyond. We are delighted to honour her.”

D’Aquin was also a notable designer and poet. Under her pen name, Marie Sylvia, she won numerous literary awards. She also received the Legion of Honour, the highest French order of merit, in 1956. She died in 1963.

Among her contributions to the city was her design of La Maison Jeanne d’Arc, built in the the west-end Westboro neighbourhood in 1933. It served as a primary boarding school, offering elementary, intermediate and high school courses.

The building today is a designated heritage building after its neighbours fought to keep it from being redeveloped.  It is one the earliest examples in Ottawa of a building designed by a woman.

Sister Yvette Papillion, who was one of the members of the institute, reflected on d’Aquin’s dedication to education and the impact she had on the lives of women.

“We are proud today that she is being honoured for who she was as a woman, for her forward-thinking vision and for the legacy she left us,” she said.

The plaque is in the Jeanne d’Arc Courtyard Gardens on Clarence Street, behind the original home of the Institute on Sussex Drive.