2 days ago 0 4 min read
We use cookies to provide a personalized experience for our users. By continuing to browse this site, you give consent for cookies to be used.
Got it!
Home > News > Social Issues > Canada Day 2021: A time to reflect 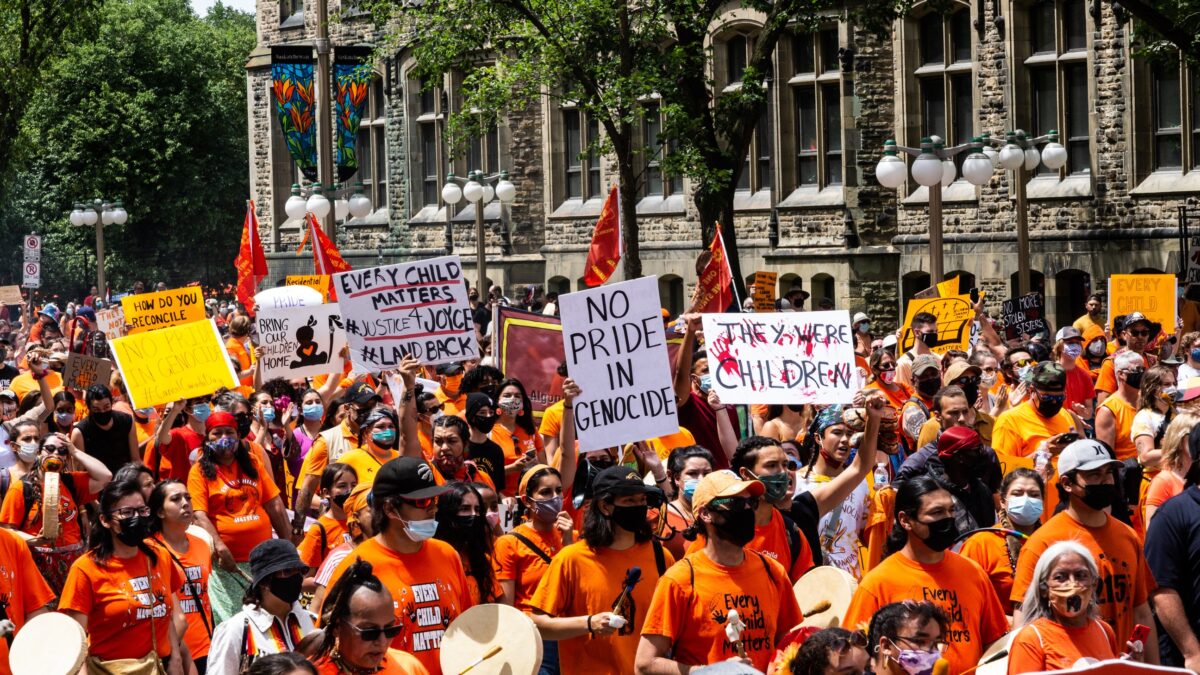 By Max Peacock and Talar Stockton, 1 year ago 0 5 min read

This year, attitudes toward Canada Day were affected by recent revelations of the unmarked graves of Indigenous children on land near former residential schools and by the shocking attack that killed four members of a Muslim family in London, ON.

Across the country on July 1, there were celebrations of Canada Day and rallies calling for the cancellation of the holiday and against colonialism and genocide.

The pandemic played a role to with many cities prohibiting public firework displays. Some communities practiced a more reflective Canada Day. St. Catharines, ON., Victoria, B.C., Penticton, B.C., Melville, Sask., and Dawson City, Yukon, are just a few of the jurisdictions that cancelled festivities because of the need for reconciliation with Indigenous peoples.

On social media, people took to their keyboards to share their thoughts. This year’s Canada Day reminded us of the dark nature of the country’s history and the need for a thoughtful conversation about it.

#CancelCanadaDay: A call for reflection

At the end of May 2021, the Tk’emlúps te Secwépemc First Nation announced they had found 215 unmarked graves on the property of the former Kamloops Indian Residential School via ground-penetrating radar.

In mid-June, the Sioux Valley Dakota First Nation found 104 graves in three different cemeteries, but only 78 of the graves were accounted for through historical records.

On June 24, the Cowessess First Nation announced they had found 751 unmarked graves on the property of former Marieval Indian Residential School.

On June 30th, the community of ʔaq̓am, of the Ktunaxa Nation found 182 unmarked graves at the former St. Eugene’s Mission School in British Columbia. Four other Indigenous communities are searching for unmarked graves on the grounds of former residential schools.

According to former senator Murray Sinclar, the chair of the Truth and Reconciliation Commission, the number of children who died while at these schools could be between 15,000 and 25,000, much higher than the initial estimates of 4,100.

A memorial march in Ottawa

Indigenous organizers held a Cancel Canada Day Rally in Ottawa yesterday “to honour all of the lives lost to the Canadian state, including the many lives lost to residential schools,” read the online calls to action.

Thousands gathered to march from the Indigenous Services Canada building in Gatineau, Q.C. to Parliament Hill, where they remained for much of the afternoon.

The mood was somber and reflective, with nearly everyone present dressed in orange to commemorate the children killed at residential schools and survivors.

Around 2 pm, a young man wearing a Canada flag as a cape and carrying two additional large flags walked through the crowd bitterly proclaiming he “loved Canada” and “would not be silenced.” He went largely ignored.

He returned 20 minutes later to repeat his procession and one woman shouted “shame on you!” Another man said “You’re a real asshole.”

The overall lack of reaction seemed to discourage his behaviour and he removed himself for the second time.

The crowd that remained listened respectively to a speaker talk about the origins of jingle dresses, and then watched a dancer perform. Many remained after the scheduled 2:30 pm end time as the event wound down.

About this data visualization:

This graphic was created using Tweets from #CanadaDay, #EveryChildMatters, #CanadaDay2021, and #CancelCanadaDay. The weight of each word in this visualization corresponds to the frequency of usage within these hashtags on July 1st 2021. The bigger the word, the more it appeared on Twitter yesterday.

While many took to the streets of their cities to stand in solitude with Indigenous communities, other Canadians shared their voices on Twitter. Celebratory hashtags like #CanadaDay were trending alongside #CancelCanadaDay and #EveryChildMatters in light of recent unfolding. National leaders used the online platform to speak their individual thoughts:

In a public video statement, Prime Minister Justin Trudeau reiterated his commitment to building a better future – for everyone.

“The truth is, we’ve got a long way to go to make things right with Indigenous Peoples, but if we all pledge ourselves to doing the work, we can achieve reconciliation” he concluded.

In 2015, the Truth and Reconciliation Commission released 94 calls to action to achieve truth and reconciliation in Canada. As of writing, only eight to fourteen are considered complete.

It's a real hoot: Live owls coming to Museum of Nature in new outdoor exhibit