2 weeks ago 0 9 min read
We use cookies to provide a personalized experience for our users. By continuing to browse this site, you give consent for cookies to be used.
Got it!
Home > Community > Indigenous > No revisions planned for Canadian coat of arms despite calls for changes to reflect diverse nation 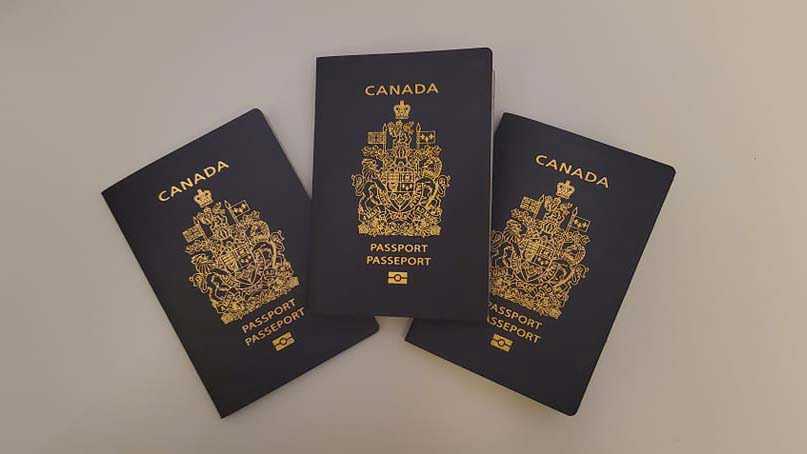 The Canadian coat of arms can be found on national buildings and official documents, such as passports. The federal Department of Canadian Heritage said it has no plans tp update the heraldic symbol's design, despite growing momentum for change. [Photo © Austin Steeves]
Canada

By Austin Steeves and Jonathan Tovell, 4 weeks ago 0 6 min read

Despite mounting pressure from politicians and advocacy groups, Canadian Heritage says no changes are planned for Canada’s coat of arms.

The national symbol that adorns passports and government buildings marked its 100th anniversary in November. It has received periodic updates over the past century, with the most recent in 1994 to add the Latin motto for the Order of Canada — DESIDERANTES MELIOREM PATRIAM (They desire a better country).

Since it was approved by King George V in 1921, the coat of arms has included symbols representing the United Kingdom and France. Unicorns to represent Scotland, lions for England and the fleur-de-lis for France are all included in the arms, as is a harp for Ireland.

According to the Canadian Heraldic Authority’s description of the coat of arms, a three-maple leaf sprig is said to represent all Canadians.

But some critics — including Nunavut MP Lori Idlout, the NDP’s critic on Indigenous issues — say the symbols on the coat of arms no longer adequately represent the diversity of modern Canada, and that revisions should be made to update the heraldic shield.

“I think it is important that there is First Nations, Métis and Inuit representation in it,” Idlout told Capital Current in November. “I think it’s about time.”

But the Department of Canadian Heritage sent a statement to Capital Current saying: “No changes to Canada’s coat of arms are being considered at present,” the department said.

“(Revising the coat of arms) will be manifesting respect, and it would be a positive symbol of reconciliation.”

However, the push to revise the coat of arms has gained another high-profile Ottawa supporter, and two of the three premiers of Canada’s northern territories have told Capital Current they’re open to revisions to include Indigenous representation and to better represent contemporary Canada and its peoples.

“Experts can think of a design which can represent Canada as a cultural mosaic — not only British or French,” Gipsy Ghosh, director of the World Multicultural Festival in Ottawa, told Capital Current.

Ghosh and Idlout are far from alone in thinking the century-old symbol could use a shake-up in design. In 2019, a petition was presented to Canada’s Parliament, urging the government to revise the coat of arms.

Former Winnipeg Centre MP Robert-Falcon Ouellette — an Indigenous member of the Liberal caucus during Prime Minister Justin Trudeau’s first term in government from 2015-19 — championed the petition, which attracted 550 signatures, in the House of Commons.

The petition called on Ouellette’s own government to revise the coat of arms so Indigenous Peoples are recognized as co-founders of Canada on such a key symbol of the nation.

Ouellette, who was defeated in the 2019 election, told Capital Current in November that he still supports the idea, saying the coat of arms should represent all Canadians and distinguish Canada as its own nation.

“I think for Canada to be our own country, it obviously has to have our own symbols, which are well represented within that coat of arms,” Ouellette said last month. “I think that should involve discussions with Indigenous people, newcomers, people from all walks of life about what those symbols are exactly – what unites us as Canadians.”

While not committing to any changes, the federal government’s response to questions from Capital Current outlined the process required to revise the coat of arms, including collaboration with Indigenous people across the country, along with officials from the Canadian Heraldic Authority, the team of heralds in charge of designing each coat of arms used in Canada.

The federal response stated: “An adequate period of time should be dedicated to the analysis of this project, in order to examine its implications in the most respectful and comprehensive way.”

In its statement, Canadian Heritage said the federal government “remains committed to advancing reconciliation and forging a new relationship with Indigenous Peoples, through cooperation and respect.”

Ghosh said changing the coat of arms to reflect symbols of Indigenous groups would be a concrete act by government to support truth and reconciliation.

“To an extent,” said Ghosh, revising the coat of arms “will be manifesting respect, and it would be a positive symbol of reconciliation.”

Reconciliation was highlighted by Northwest Territories Premier Caroline Cochrane in her statement to Capital Current. “Our government is committed to advancing reconciliation, and as we saw in the (Nov. 23) Speech from the Throne, so is the Federal government,” Cochrane said. “It’s an important issue for many, especially Indigenous people, who have felt the effects of colonialism for decades.”

On the topic of altering the coat of arms, Cochrane added: “Canada is growing as a nation. It’s important we have these types of discussions to ensure we are representing the people of this nation and our history as best as we can. If consideration would be given to possibly changing the coat of arms, it would be important as part of reconciliation for Indigenous people across the country to be involved in the discussions.”

“The Government of Nunavut recognizes that many Canadians are navigating through the era of truth and reconciliation,” Petru said. “We encourage ongoing dialogue on various approaches to reconciliation, including the discussion around reviewing the coat of arms of Canada to include representation of Indigenous peoples and the different regions of Canada, such as the Arctic.”

Ghosh said now is the time to open discussions on how best to change the emblem that adorns many institutions and documents across Canada.

“Something should be added to it. It’s very obsolete,” Ghosh said. “Being an immigrant country, Canada cannot go with the same old coat of arms.”

Lessons from the slippery slope of excessive sweat