3 days ago 0 2 min read
We use cookies to provide a personalized experience for our users. By continuing to browse this site, you give consent for cookies to be used.
Got it!
Home > Social Justice > Carleton student community seeks answers about suspension of Attendant Services Program 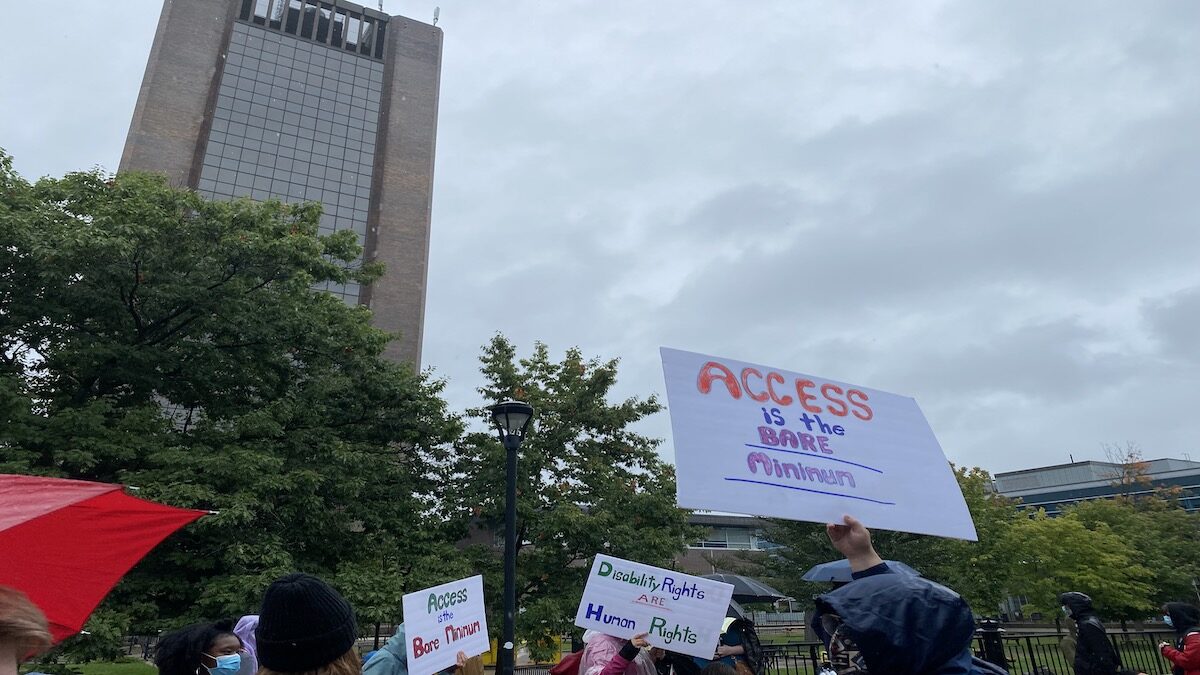 Signs at the CU Care Walkout on Sept. 22 in the Carleton quad. [Photo © Sarah Malina]
Community

Many members of Carleton’s student body are outraged about the suspension of the university’s Attendant Services Program (ASP) which helps students with physical disabilities.

The university suspended the program for the Fall 2021 term because of COVID-19 health concerns.

Clients of the program, as well as other students and student organizations, say the decision is unfair. They say that with the reinstatement of in-person classes and varsity sports, only able-bodied students were given the ability to return to campus.

“Carleton was like, ‘Sports are resuming, this is great!’ and I’m like, so we can have Panda and have varsity sports, but I can’t go pee so that I can attend a lecture?” asked Sydney Weaver, a fourth year student and ASP client.

The program allows students with physical disabilities who require assistance with daily activities to live and study on campus. Carleton and Algonquin College are the only Canadian post-secondary institutions to offer such services.

Kimberley Chiasson and some of her fellow clients formed the CU Care Act to inform others about the program suspension and its effects on members of the Carleton community. They organized a walkout that took place on Sept. 22.

“We just thought a walkout would be a great way to allow the student body to help us out and make a statement, in terms of actually leaving physical classrooms, or leaving the campus in general, since we couldn’t get in,” said Chiasson.

Chiasson said that Carleton has not yet responded to their walkout.

Clients offered to hire their own attendants as an alternative, but that proposal was denied. Weaver said they were told that students could not bring people from outside the Carleton community into residence.

Weaver said she called Ottawa Public Health (OPH) to inquire about the health risks of the program.

“As long as both of us are double vaccinated, and PPE is worn where appropriate, they did not consider it a risk,” she said she was told by OPH.

“We did want to do our due diligence and gave Carleton an opportunity to work with us,” said Weaver.

“It’s impeding academics for a whole portion of our community, to not be able to learn,” she said.

According to students, this suspension is a major setback for Carleton University in accessibility and disability justice. Carleton is considered by many as a leader amongst Canadian universities when it comes to accessibility. No other university offers such services, and that is why many students with physical disabilities choose Carleton.

‘I got rejected from my local university because of disability issues, they just told me not to apply, so Carleton quickly became the only option for me,” said Chiasson.

Advocates say that Carleton has told them that it’s too late to reinstate the program this fall and they are in agreement with the university. Now advocates are focusing on getting solid answers for what the winter term holds for ASP. The university says that they’re planning a tentative reopening of the program for winter term, but no information has been given about what that will look like.

“The longer the university is taking to give us these answers, the more difficult it’s making (the situation), for what we all hoped would be at the very least a winter return,” said Ramnarine.

Ramnarine said that she would bring these questions and concerns to Benoit-Antoine Bacon, the President and Vice-Chancellor of Carleton University, at the October Senate meeting.

“If these questions aren’t answered and if these concerns aren’t addressed, that is the next point of contact that we have, to question the university administration and finally get some answers.”

As the ASP is government-funded, questions have been raised by clients about whether Carleton has received the funds for the full year despite not running the program this fall.

“As per contractual obligations, all unspent money for the Attendant Services Program is returned to the Ministry of Health and is re-allocated to other health service providers in the region,” said Steven Reid, Carleton University’s Media Relations Officer, in an email statement.

Chiasson said that there are plans in place to organize another walkout with other student organizations like CUSA, Rideau River Residence Association, and the Carleton Disability Awareness Centre, to “try to make it bigger and better…making it as effective as possible.”

“I do hope they feel some regret at some point. Recognize that they are responsible for demonstrating to other academic institutions what accessibility is because they are considered a leader in accessibility, and in this period they haven’t lived up to that,” said Weaver.