3 days ago 0 5 min read
We use cookies to provide a personalized experience for our users. By continuing to browse this site, you give consent for cookies to be used.
Got it!
Home > News > Ottawa > Carp River restoration project supports biodiversity, enriches neighbourhood 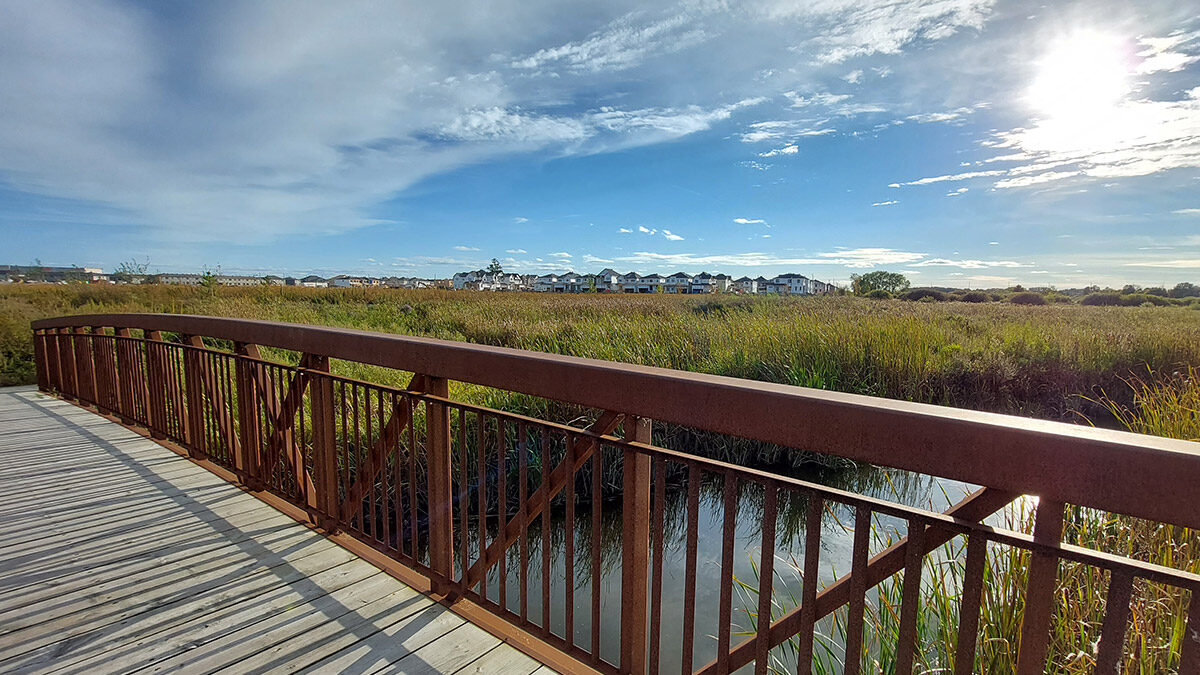 The Carp River flows underneath a bridge in a wetland area. The habitat sits near a growing housing development in Kanata. [Photo © Jonathan Tovell]
Community

Nature advocates behind Ottawa’s newest conservation area — a stretch of the Carp River and its surrounding wetland in Kanata — say the restoration project is bringing new life to a fragile habitat and providing a unique educational opportunity for visitors.

The Carp River Conservation Area has four kilometres of paved trails around a section of restored waterway in Kanata North. The Mississippi Valley Conservation Authority and Friends of the Carp River group want to teach visitors about the significance of restoring the river.

“(We’re) just getting people to see this as more than just a place where there’s a bunch of wetlands and mosquitos (but also) a place to enjoy and to learn from,” said Janet Mason, vice-chair of the Mississippi Valley Conservation Authority and chair of Friends of the Carp River.

The site shows how the restoration and protection of greenspace can bring nature’s benefits to a densely populated suburban area, Mason said.

“It’s important to understand you have this functioning natural area surrounded by suburbia,” she said. “You can have something beautiful and functioning and still have development and hardscape and other things that this is helping to mitigate the impact of.”

Stormwater management ponds receive runoff water from Kanata’s neighbourhoods and business areas. The ponds allow heavier contaminants to settle in a contained area before the filtered water slowly enters the river to maintain a sustainable flow and help prevent flooding and erosion.

Restoring the Carp River was an important prerequisite for plans to build new houses in Kanata, according to Paul Lehman, former executive general manager of the Mississippi Valley Conservation Authority.

The Carp River was straightened and widened during the 1900s for better drainage when the area was farmland, Lehman said. The shallow slope that was created caused sediments to load up the river worsening drainage. Leaving the river as it was would have created challenges for developing the area, said Lehman.

A 2004 study by the City of Ottawa and the conservation authority started momentum towards the restoration project, he said. Developers were heavily involved in the planning to turn the river into a more natural, curving stream. The river was designed to maintain enough speed during low-flow periods so the stream carried sediments instead of allowing them to build up, he said.

“To actually see it completed now and performing as it was intended, it is quite nice to be able to see an improvement,” said Lehman, who retired from the MVCA in 2019.

Mason said the restoration has created a healthy habitat for more than 150 bird species and other animals.

“It’s just this diversity of species that now can make use of the site as either a home during the summer or a place to stop and migrate or maybe even a place to hibernate during the winter,” said Mason.

Migrating birds tend to make pit stops at a pond at the east of the site, Mason said. She said she spotted a bald eagle visiting in September.

Shorebirds also frequent the habitat pond. On a recent visit, an egret waded into the water near a flock of Canada geese. The largest bird in the pond when its cousin, the great blue heron, isn’t around, the egret’s white feathers stood out against a grey boulder and green foliage along the shore.

The egret slowly stepped ahead in the shallows. It leaned forward and peered intently into the water in search of its supper. Every few minutes, the bird pounced, trying to spear prey with its sharp beak. Rising back up — seemingly without success — the egret refocused and stepped forward again along its path, still looking to satisfy its hunger for the night.

The Mississippi Valley Conservation Authority recently created an app so visitors can learn more about egrets and other animals, as well as plant life in the Carp River Conservation Area. Visitors can download the EcoTrekr app to discover fun facts and complete quizzes by walking around to locations on the map.

It’s all part of an ongoing initiative to develop what the MVCA is calling the Carp River Living Classroom. Mason said the authority is considering plans to host student groups.

“My vision would be that you’ve got school kids all around Ottawa and particularly in the local area, some within walking distance, who are enjoying the site and learning from the site interactively,” Mason said.

Local residents should also get engaged in taking care of the conservation area to continue benefitting from the improved habitat and water quality, Mason said. Whatever ends up in the Carp River eventually flows into the Ottawa River upstream from the city’s water intake.

“Don’t dump stuff in your stormwater drain,” she said. “Don’t throw pesticides and fertilizer on your lawn — because guess what? That ends up in the drain.”

The site remains open throughout the fall for visitors to take advantage of optimal views, according to Mason. The grass and foliage will die down, making way for a clearer look at the water and animals without having to swat away mosquitoes, she said.