4 days ago 0 6 min read
We use cookies to provide a personalized experience for our users. By continuing to browse this site, you give consent for cookies to be used.
Got it!
Home > Social Justice > Carleton students push university to divest funds from fossil fuels investments 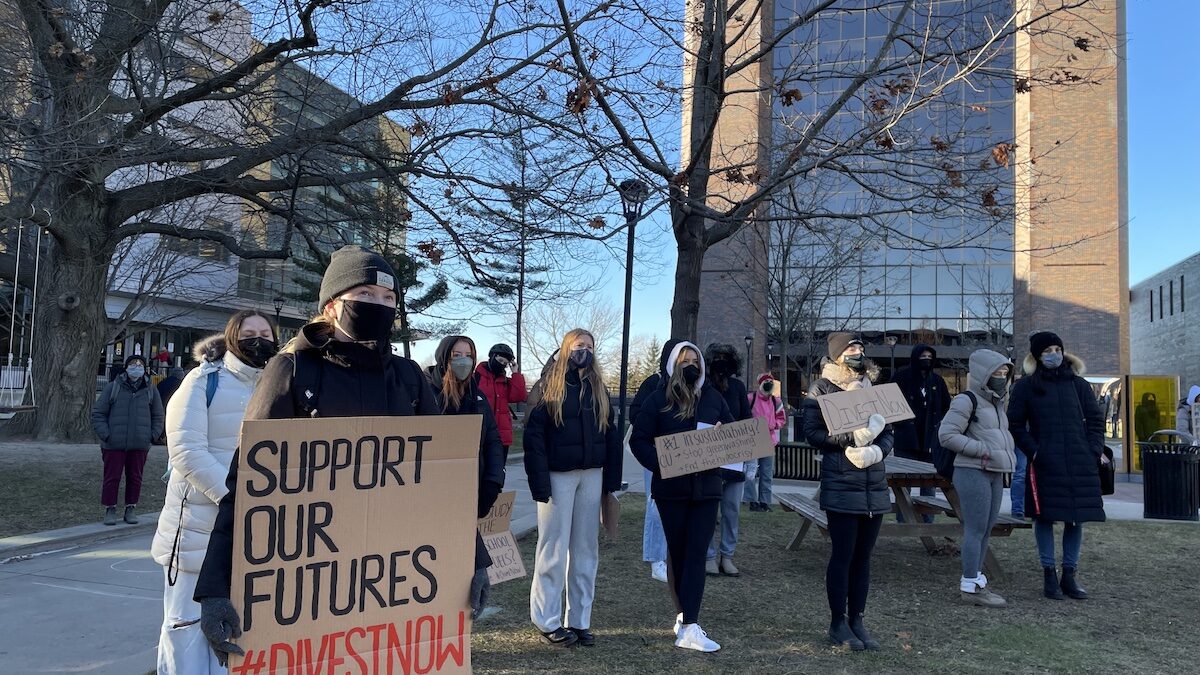 Carleton students recently rallied on-campus, for the first time since COVID-19 lockdowns started, to put pressure on the university to divest from fossil fuels.

“Carleton needs to start making a plan … for divestment,” said Steph Vienneau, the action lead and a third-year environmental studies student. “A lot of the universities across Canada have already begun divestment and Carleton claims to be a leader in sustainability and claims to want to lead this movement. Divestment is a very strong way for them to show people that they are taking the climate crisis seriously.”

About 50 protestors urged the university to move the $16.6 million in endowment funds it currently has invested in fossil fuel assets into sustainable alternatives by 2025.

Climate Action Carleton, a student-led climate justice group, organized the demonstration to raise awareness about their divestment campaign before Carleton’s board of governors met to discuss the framework for the school’s 2022-2023 operating budget.

Students expressed frustration with the university’s current sustainability efforts which include a pledge to have net zero carbon emissions by 2050. Global and international studies student Karenna Chen said these promises fall short of real action and divestment is key.

“Responsible and carbon-neutral investing isn’t going to change what’s happening. Carleton can say it’s doing things that help the future but what they need to be doing is taking out the $16 million they have in fossil fuels,” Chen said. “We can’t keep funding the fossil fuel industry. It’s just funding the breakdown of our future.”

In a statement, the university said it is dedicated to engaging in conversations with students about how to address climate concerns in the context of the endowment fund as they review their decade-old responsible investing approach.

“The policy is based on the belief that integrating environmental, social, and governance factors into the investment decision-making process, and engagement with portfolio companies, is effective in creating positive action in mitigating climate change,” the statement reads.

Divestment is inevitable, said Jayden Arif-Pardy, a master’s student in health sciences who participated in the protest. He added that, if universities are at the forefront of innovation, they must be mindful of the precedents they set.

“Students care even if the administration doesn’t think they do, and whether or not they like it, we’re going to be in positions of power in the future,” he said. “So it’s just better to be on the right side of history.”

Around the world, 1,500 institutions have divested more than $39 trillion. In Canada, academic institutions have begun to divest in response to the student-led movement. Days before the United Nations Climate Change Conference, for example, the University of Toronto announced it would be move its $4 billion endowment fund out of fossil fuels. In January 2020, the University of British Columbia announced plans to divest its $1.71 billion Main Endowment Fund. Both institutions stated their hope to substantially contribute to the development of a more sustainable future that embraces a low-carbon economy.

Carleton has a responsibility as one of Canada’s capital universities to divest, Vienneau said. She explained that such definitive action by the university would help raise the alarm at a federal level about the urgent reality of fossil fuels and inspire other organizations to do the same.

Divestment is morally right and fiscally responsible, says Holden Heppler, an undergraduate student governor, and Climate Action Carleton’s liaison to the university board.

“If you want to look at it from a purely economic lens, it’s actually beneficial for the university to go to the sustainable investments in comparison to fossil fuels, and furthermore, it’s also a moral imperative,” Heppler said.

A 2021 report from the Global Divestment Commitments Database found there is no rationale for investors to keep fossil fuels in their portfolio. The report cited recent data from Morningstar, an investment research firm on Wall Street, which revealed how environmentally sound investment options reduced long-term financial risk.

This data is essential in informing the transition to a climate-smart economy since additional research estimates half of global fossil fuel assets will be worthless by 2036 under a net-zero transition. Countries that invest in decarbonization early will mitigate the risk of a 2008-style financial crisis, reported The Guardian.

Carleton University is looking to the future, said Anastasia Lettieri, an undergraduate student governor, following the meeting with Carleton’s board of governors.

“I’m very pleased by the discussions being held on the board regarding Carleton’s sustainability, and I feel that these discussions are in line with other sustainability approaches being taken across the province,”  Lettieri said.

While Climate Action Carleton’s divestment movement still has strives to make Vienneau says the gathering at the rally has made her optimistic for the future.

“I’m really hopeful for divestment,” she said. “I think it’s practical to think that within the year we could totally see Carleton come up with a [divestment] plan because there’s really no more reasons why divestment isn’t a practical option for them considering how many universities across Canada have divested.”