2 weeks ago 0 1 min read
We use cookies to provide a personalized experience for our users. By continuing to browse this site, you give consent for cookies to be used.
Got it!
Home > Arts & Culture > Television > Celebrating Indigeneity in person: The Asinabka film festival returns to roaring applause 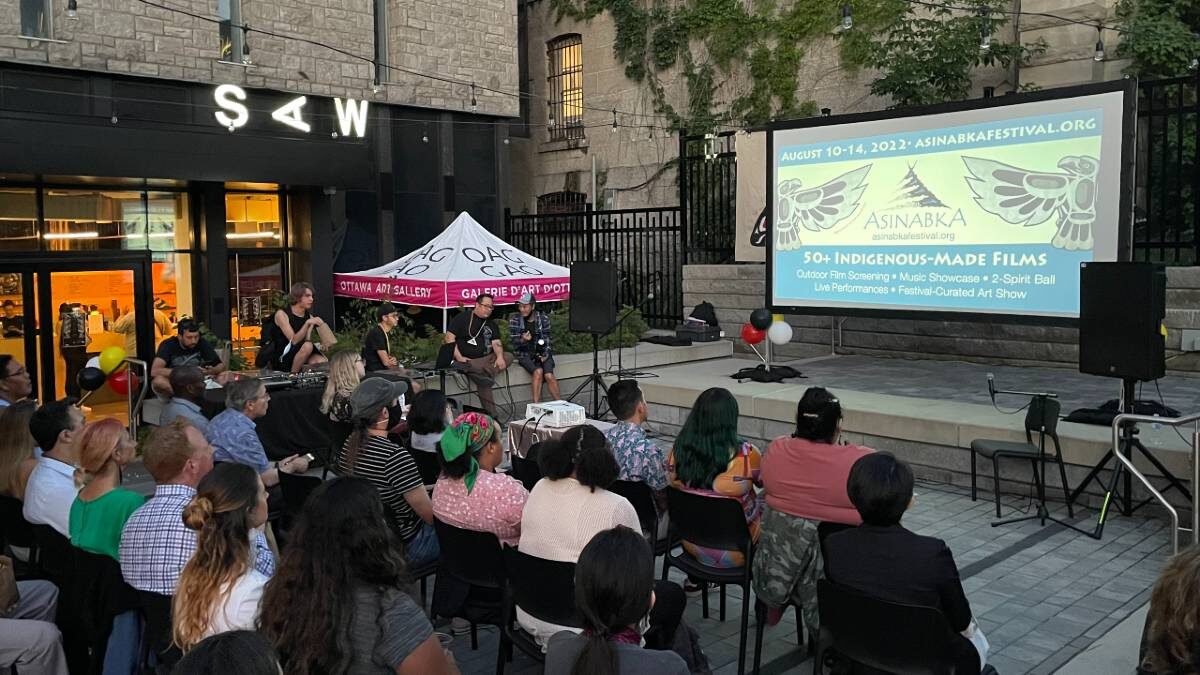 Applause filled the Club Saw outdoor courtyard as the credits of the film Slash/Back rolled on the opening night of the 11th annual Asinabka Film and Media Arts Festival.

After three years online because of the pandemic, the event returned to in-person programming, starting with a community screening of Nyla Innusuk’s directorial debut.

People crowded into the courtyard, claiming seats, laying down picnic blankets or finding spots to sit on the stone steps with popcorn in hand to watch a coming-of-age, alien-invasion film set in Nunavut. Slash/Back premiered at the 2022 South by Southwest (SXSW) Film Festival.

The film follows a group of Inuk teenage girls who were out on the land exploring the arctic wilderness when they discover an alien invasion that threatens their hometown of Pangnirtung. The teens become their home’s defenders.

“The movie deals with themes of shame around your Indigeneity and your Inukness, and these are things that I had to process and kind of go through when I was growing up,” Innuksuk said.

“To be seeing these teenagers, young women and men, as they’re in Texas, where we had to show the movie at South by Southwest with (actor) Chelsea (Prusky) addressing the Texan audience in Inuktitut and thanking them for watching the movie, it just shows how far we’ve all come in this process. It’s been so special.”

The moment Asinabka co-founder Howard Adler saw Slash/Back, he said he knew it would be the perfect way to launch the five-day festival because the film is “a celebration of strong Indigenous women.”

“It’s a gift to be able to gather and share our stories and, of course, the past three years is going to be one of our stories.”

Leo Koziol, the founder and director of the Wairoa Maori Film Festival.

The festival celebrates Indigenous film, media, music and culture from across Turtle Island and around the world.

Adler said it is “really exciting to see this international collaboration” with other Indigenous organizations and festivals. This year Asinabka’s program features Indigenous artists and filmmakers from across Canada, Chile, Mexico, New Zealand, and Venezuela.

“I didn’t realize how much I missed all my friends until the past two or three days,” said Leo Koziol, the founder and director of the Wairoa Maori Film Festival. It is the longest-running Indigenous film festival in New Zealand. It takes place annually during Matariki, which marks the start of the Maori New Year.

“We see now how fragile the world is and how important the wisdom of Indigenous peoples is, and yeah, we’ll get through this together,” Koziol said. “It’s a gift to be able to gather and share our stories and, of course, the past three years is going to be one of our stories.”

Koziol will present the Mana Wairoa Maori Pasifika Shorts program he curated for Asinabka on Friday at 7:45 p.m. The program features six shorts created by Maori filmmakers, including singer Te KuraHuia who is also performing at the Asinabka’s Music Showcase & Two-Spirit Ball on Saturday.

KuraHuia said she is excited to share her visual EP Uha, an ancient Maori word for woman, at Asinabka, which has provided her with a chance to “continue to weave your knowledge basket because we never stop learning.”

The festival is “so amazing,” KuraHuia said. “I mean, they’re giving an opportunity to other Indigenous cultures from around the world that probably most of the people here don’t even know of.”

“It’s providing them with an opportunity to represent and showcase who they are and where they come from,” they said.