4 days ago 0 8 min read
We use cookies to provide a personalized experience for our users. By continuing to browse this site, you give consent for cookies to be used.
Got it!
Home > Arts & Culture > Theatre > Looking for laughs: Centretown pub draws a crowd with new comedy night 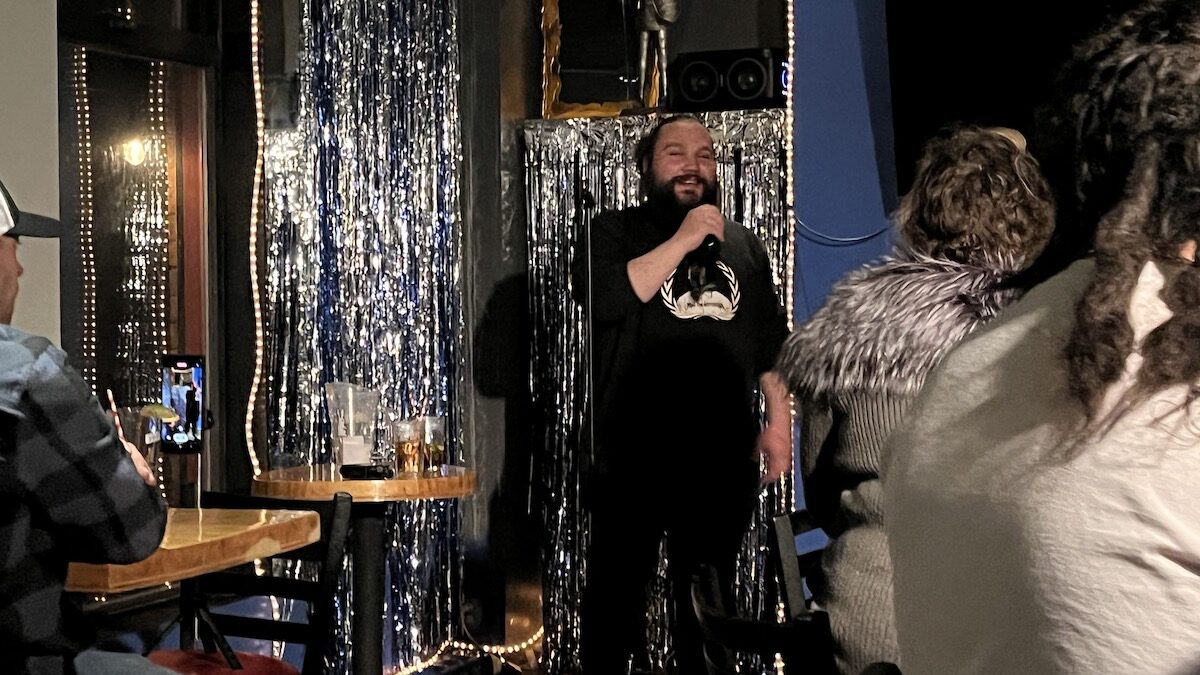 Among the performers for the inaugural TeeHee at T’s comedy event on April 4 at T’s Pub on Somerset Street West in Centretown was Danny Meyers from Ruckus Productions, which organized the event. [Photo © Ashley Hermalin]
Arts & Culture

T’s Pub, a Centretown business on the brink of its fifth anniversary, is still experiencing firsts – including its first comedy show in April. Partnering with entertainment promoter Ruckus Productions, TeeHee at T’s was born.

The small, intimate gay bar on Somerset Street West provided the space, the customers and the drinks for the event, aimed at enlivening the venue and celebrating comedy in the capital.

The pub originated when two friends, Les Cameron and Stanton Lowe, thought they could do better in business than some of the other pubs in the area. Within a month, T’s Pub, named lovingly after Lowe’s stage name, Tatiana Romanoff — and a play on the word “tease” — was opened.

Typically hosting many different events to shake things up at the pub, TeeHee at T’s was Cameron and Lowe’s first foray into comedy.

According to Liam Rado, one of the organizers from Ruckus Productions, the event was meant to happen before COVID-19 but was postponed because of lockdowns.

Ruckus Productions is a new production company in the city run by and for Ottawa comedians.

“Remember when Apple was in a garage?” Rado joked. “We’re like one step away from that.”

The event, MC’d by Kia Mazhar, featured Ottawa comedians as well as Rado and his Ruckus partner Danny Meyer.

The goal is to find local “rooms” for comedians to take the stage and perform as often as possible.

“If you love the craft of comedy, whether you’re a Dave Chapelle or a nobody, I feel you should be able to perform your craft at least once a week.”

“If you love the craft of comedy, whether you’re a Dave Chapelle or a nobody, I feel you should be able to perform your craft at least once a week,” said Rado.

He said events like this are important because comedians need an audience to workshop their sets and see if their jokes land.

“Last time I was this broke I had to look into my journal, and the only thing I had was ‘start a podcast,’” Mazhar wisecracked between sets. Rado later used a beer pitcher to collect donations.

Will, who said he preferred not to give his last name for privacy reasons, didn’t know about the comedy event and enjoyed the surprise when came to the pub he frequents for a few drinks.

“I really didn’t know it was happening,” he said, adding that it was a happy accident.

“It’s got to be a tough gig,” he said. “A sense of humour is so personal and it’s also environmental you know – a joke that is a dud joke for a different crowd could be hilarious, and that’s got to be hard to manufacture all the time.”

Trena Wilson attended the event to support her friend George Assily, one of the night’s performers.

The event was headlined by Trevor Thompson, an Ottawa-based comic who’s been a regular in the scene for about 15 years.

Among the standouts at the first TeeHee at T’s were Holder, who joked about her “unfortunate” love life, citing hiking as the worst possible date, but one that men keep trying to take her on.

MC Kia Mazhar also got some good laughs after claiming he wasn’t a hippie, but then told a story about when he lived in a van and worked as a tree planter.

Jokes among all the comics were often self-deprecating, edgy, and took unexpected turns. The comedians joked about their own ethnicities, race and sexuality, along with other topics such as drug use, class and dating.

“It was a great turnout, a lot of nice people,” said Cameron.

If it’s your first comedy show, added Rado, “you can definitely expect some rowdy… and to have a good time.”