6 days ago 0 6 min read
We use cookies to provide a personalized experience for our users. By continuing to browse this site, you give consent for cookies to be used.
Got it!
Home > Sports > Chasing the Cup: Despite the Canadiens’ loss, the journey was a beautiful ride 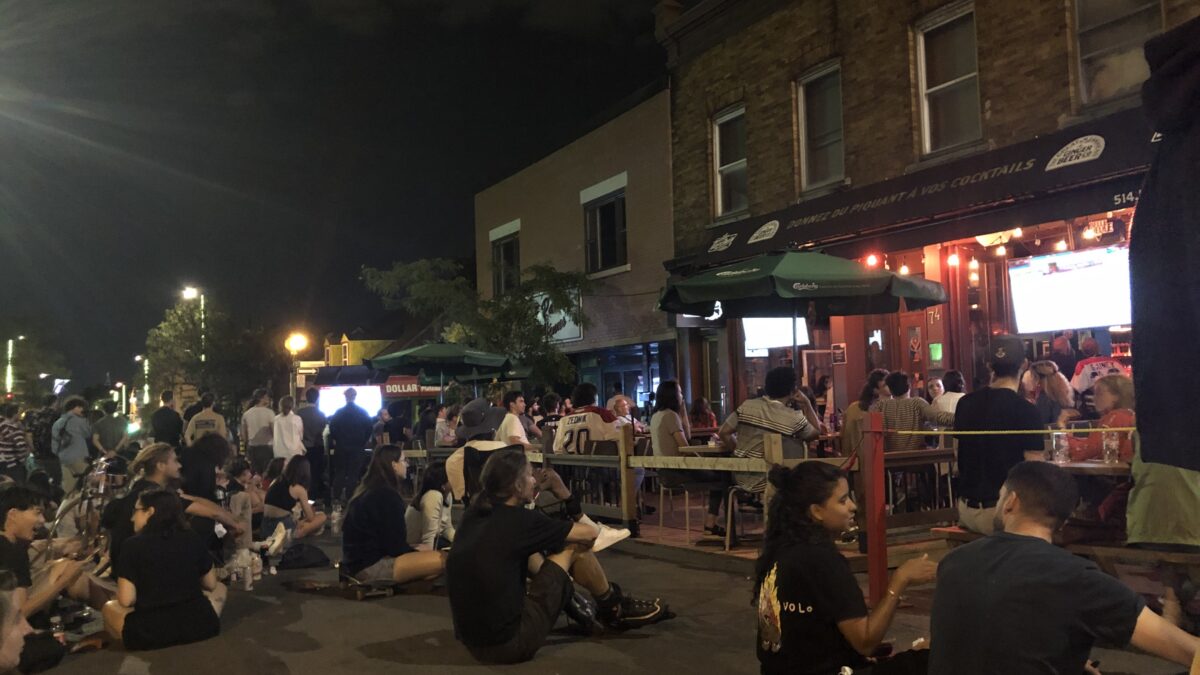 Fans pack a street in front of one of the many Montreal bars showing the Habs game on big screen TVs Monday night. (Photo © Sarah Pledge Dickson)
Commentary

Chasing the Cup: Despite the Canadiens’ loss, the journey was a beautiful ride

The Montreal Canadiens went on a completely unexpected race for the Stanley Cup this year. Since their first win against the Toronto Maple Leafs in round one, they’ve been compared to the team of ’93, the last time the Habs hoisted the cup.

Both Canadiens’ teams had outstanding goaltending. They also both had deep lineups and a little bit of luck. The teams started the season strongly only to both finish fourth heading into the post-season. Both came back from a two-game deficit in the first round and swept the second. Even Patrick Roy’s famous wink was paid homage to by a “clin d’oeil” from Carey Price. The stars seemed to be aligning.

I have been a long-time hockey fan and a bigger goalie fan for as long as I can remember but there’s a special place in my heart for Price and the Montreal Canadiens. When the Habs went to face the Tampa Bay Lightning in the finals, I travelled to the city to witness the crowds that were all over television. It looked normal for the first time in over a year.

“A full arena, incredible energy and another championship in Tampa. It feels like things are normal,” said Gary Bettman, commissioner of the NHL.

The crowds were smaller this past Monday, when the Canadiens faced the possibility of being swept. You could feel the tension in the streets. Mont-Royal, one of the main city arteries, was closed to vehicles. Everywhere you looked, people in Habs jerseys were walking from one outdoor TV to the next during breaks in the game. The bars were overflowing and people carried kitchen table chairs and blankets to sit in the middle of the street to get a glimpse of one of the screens.

But going into overtime with three minutes of penalty kill to start the period things weren’t looking promising. Even though, Montreal had boasted one of the best penalty-kills in the playoffs, Tampa had the best power play.

Every time Price froze the puck in OT, the crowd would erupt in applause. Every shot the Lightning took on the power play had everyone on the edge of their seat. The Habs survived and soon after on a sprawling, sliding shot from forward Josh Anderson won the game in sudden death.

Everyone flocked again to outdoor TVs on Wednesday night with a bit more hope. Maybe the momentum would shift in favour of Montreal. The crowds were bigger, with people were traveling hours to stand closer to a potential moment in history.

Both teams often went on to win when scoring first so, when the Lightning put in the first goal in the second period, you could feel the weight settle on the crowd.

In the end, Tampa’s Conn Smythe trophy winning goalie, Andrei Vasilevskiy, held Montreal scoreless, stopping all 22 shots. And the Stanley Cup will stay in Florida for another year.

“I think a lot of us are at a loss for words right now,” Weber said. “To be honest, it’s tough. I think everybody knows that. You play for this reason. You get so close and you just can’t get enough.”

There were tears in the crowd when the final buzzer sounded.

And just as Steven Stamkos was about to lift the cup, the TVs were unplugged and the crowd dispersed. It was a bitter end to a historic run.

Brendan Gallagher, loved by Canadiens fans and feared by everyone else, said it was the grit that got them there.

“Every single guy gave everything they had every single night,” he said. “You look at our group and, obviously, there are a lot more talented teams and there’s a lot of teams that do a lot of things, but there’s no team that’s stronger as a group, and the resiliency that we showed, just a good team to be a part of.”

It has been a hard year enduring the pandemic. And while the walk home after the game was long, there was a feeling of awe. Smiles and nods passed from one jersey-wearing fan to the next as most came to realize that making it to the finals was an historic, uplifting journey at a time when it was needed most.