6 days ago 0 3 min read
We use cookies to provide a personalized experience for our users. By continuing to browse this site, you give consent for cookies to be used.
Got it!
Home > News > Social Issues > Citing tenants’ rights and low-cost housing crisis, ACORN appeals city approval of Herongate redevelopment 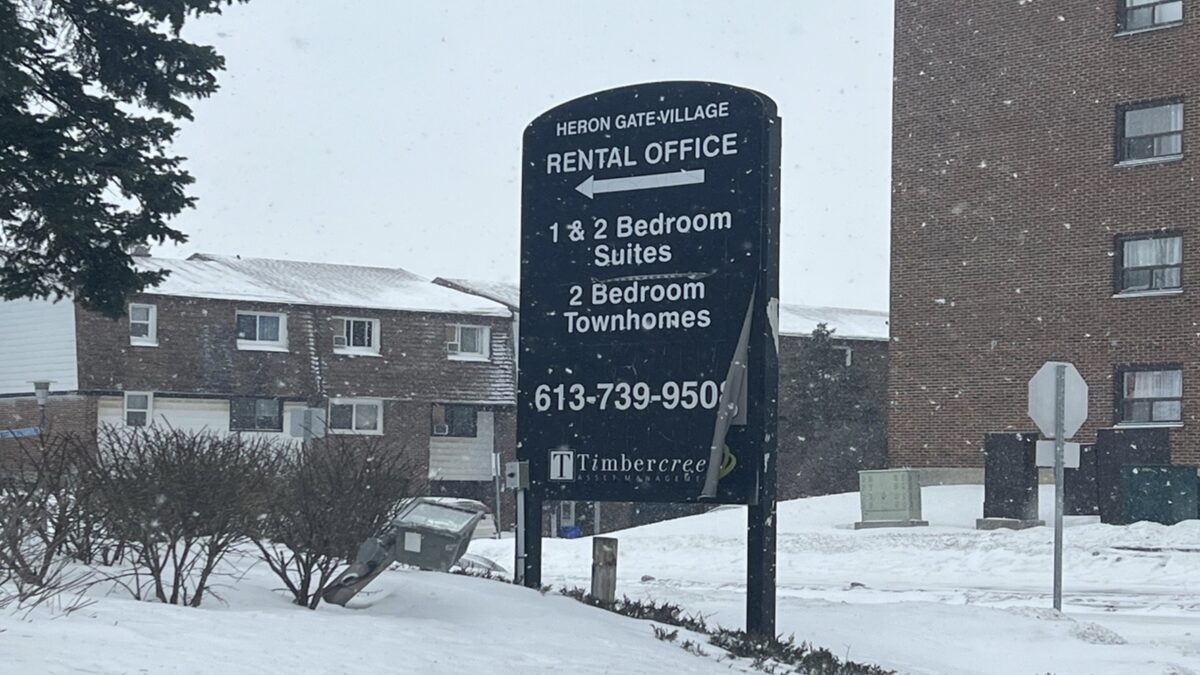 ACORN's appeal of the City of Ottawa's approval of the upscale redevelopment of low-cost housing in Ottawa's Herongate neighbourhood is the latest move in a long-running dispute with the company behind the project, Hazelview (formerly Timbercreek). [Photo © Izzie Binder-Helenchilde]
Community

Residents of Ottawa’s Herongate community, dreading the upscale makeover of their working-class neighbourhood, are poised for a fight before the Ontario Land Tribunal.

The social justice organization ACORN formally announced at a Feb. 12 community meeting that it has filed an appeal with the provincial tribunal of the City of Ottawa’s approval of the south-end redevelopment plan.

In September, Ottawa’s city council approved a proposal from Hazelview Industries to redevelop part of Herongate. ACORN had urged councillors to reject Hazelview’s plan, but council voted 18-6 to approve the project while signing a Memorandum of Understanding with the company meant to provide some protection to existing tenants and create some new affordable housing.

Despite the proposed protections, ACORN has appealed the council’s decision with the OLT.

“While ACORN members from Herongate were able to force some concessions at City Council,” ACORN said in a statement, “the redevelopment application and subsequent MOU heralded by the City as a groundbreaking achievement does not do enough to protect affordable housing and will only serve to further gentrify the neighbourhood.”

Hazelview acquired Herongate Village in 2012 and, by 2015, had decided to begin demolitions in the residential complex of townhouses and apartment buildings.

“This really unique and interesting community is going to be torn apart for no reason other than to make money.”

Hazelview has already demolished 230 units, many of them three- and four-bedroom townhomes suitable for large families. In 2016 and again in 2018, hundreds of tenants were “demovicted” to accommodate construction of new luxury rental units.

Herongate residents fear they will be displaced with no where to turn for affordable housing. But the fight isn’t just about affordability, they say.

“I feel a really profound personal connection to this home,” said Tammy Mast, a resident of the area for eight years.

She said she loves the working-class, ethnically-diverse flavour of the community and dreads the coming transformation.

“A demographic change to this neighborhood is built into (Hazelview’s) business model,” said Mast.

As part of its agreement with the city, Hazelview has promised to designate 20 per cent of Herongate Village units as “affordable housing” for 10 to 20 years depending on whether they are new or simply renovated. Hazelview has also promised not to evict any tenants unless “equivalent” units in Herongate Village are offered at the same rent the tenant is currently paying.

ACORN, which stands for Association of Community Organizations for Reform Now, is a national independent organization of low- and moderate-income families with about 140,000 members in more than 20 neighbourhood chapters across nine cities.

ACORN said the concessions made by Hazelview are not enough to accommodate the more than 4,000 working-class tenants in Herongate who rely on the affordable housing they live in now. ACORN’s position is that the way Hazelview will calculate “affordable” rents is unreasonable.

Tied to market rates and the median household income in Ottawa, “affordable” rents are expected to be as high as $2,725 per month.

ACORN has also taken issue with the notion of an “equivalent” suite for the same rent that will be offered to displaced tenants. George Brown, a lawyer who has been assisting ACORN since the organization formed its Ottawa chapter in 2007, said: “A three-bedroom townhouse, like (Herongate families) are in now with a backyard is much different than a three-bedroom rental unit on the tenth floor of a building.”

“While ACORN members from Herongate were able to force some concessions at City Council, the redevelopment application and subsequent MOU heralded by the City as a groundbreaking achievement does not do enough to protect affordable housing and will only serve to further gentrify the neighbourhood.”

Brown noted that there has not been any indication that Hazelview’s new builds will include townhouses.

ACORN also objects to the time limits on Hazelview’s promised affordable housing and the company’s refusal to offer tenants who were demovicted in 2016 and 2018 equivalent units for the same rent.

Many of those tenants have filed a complaint before the Human Rights Tribunal of Ontario. The tenants, 90 per cent of whom are racialized, allege that Hazelview (formerly known as Timbercreek) discriminated against them by targeting them for displacement in order to gentrify the community and, ultimately, make it whiter and more affluent in order to increase their profits.

At the time of the filing of the human rights complaint, the developer responded in a document that included the following statement: “Timbercreek acknowledges that there are many communities in Ontario including the City of Ottawa that are experiencing housing shortages. It also acknowledges that the lack of affordable housing has a disproportionate impact on people of colour, indigenous peoples, women and other equity seeking groups. Identifying solutions to this endemic problem is essential. However, it does not follow that the redevelopment of communities such as Heron Gate Village engages the protections of the Human Rights Code in the absence of any evidence of discriminatory conduct.”

The essence of the tribunal appeal, as Daniel Tucker-Simmons explained at the February meeting, is that the city’s decision to approve Hazelview’s plan is inconsistent with the provincial policy statement that identifies affordable housing as a key objective.

Tucker-Simmons said ACORN will also argue the decision was inconsistent with the Canadian Charter of Rights and the Ontario Human Rights Code.

While Tucker-Simmons and Brown acknowledged the importance of the law, they both said they believe that the grassroots efforts of organizations like ACORN are the most effective catalyst for change. “There is no substitute for active, engaged organizations,” Brown said.

Mast is member of the Herongate Tenant Coalition, a grassroots social-justice group representing residents of the area. She said her devotion to the cause, like that of so many of her neighbours, is a function of her genuine love for Herongate.

Mast said residents, many of whom have lived there for 30 or 40 years, look out for one another, watch each other’s children and otherwise share their lives.

Mast, a gardening enthusiast, described how much she and her neighbours value having yards to grow food and flowers and how they share their harvests. Among her gardening-enthusiast neighbours are a couple who are 96 and 104 years old. “Every day they were out in that garden this summer,” Mast said.

“This really unique and interesting community,” she added, “is going to be torn apart for no reason other than to make money.”