6 days ago 0 6 min read
We use cookies to provide a personalized experience for our users. By continuing to browse this site, you give consent for cookies to be used.
Got it!
Home > Arts & Culture > Architecture > City approves plan to save building’s facade before demolition and rebuild at site facing nature museum 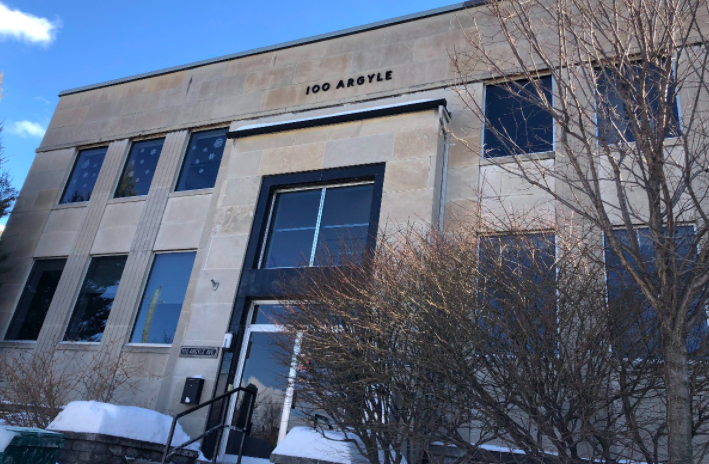 The 1950s-era building at 100 Argyle Ave. in Centretown, across from the Canadian Museum of Nature, will be demolished and replaced by a new residential tower — but not before its distinctive facade is preserved for the front of the the new structure. [Photo © Lauren Roulston]
Architecture

Ottawa councillors and city heritage advocates are backing a plan to demolish a 65-year-old office building in the Centretown heritage district while preserving its façade for a new residential highrise.

The city’s planning committee has considered the demolition of the existing building at 100 Argyle Ave. — directly across from the Canadian Museum of Nature — while preserving the distinctive limestone front of the structure. It will be incorporated in a new, 10-storey apartment proposed for the site. The building at 100 Argyle Ave. was the purpose-built headquarters of the Canadian Labour Congress.

The Centretown heritage conservation district was designated “for its cultural heritage value as a late 19th and early 20th century residential neighbourhood within walking distance of Parliament Hill. It has traditionally been a neighbourhood where many national headquarters, embassies, and consulates are located, reinforcing Ottawa’s role as the nation’s capital.”

The planning committee unanimously approved the plan on Feb. 11, with Somerset Coun. Catherine McKenney saying: “This is a significant zoning bylaw amendment amendment and everybody worked very hard on this one to get where we’re at today. It’s going to be really good.” Council endorsed the decision a week later.

The existing 2.5-storey building will give way to a new apartment complex containing a mix of one-, two- and three-bedroom units.

“It was one that didn’t look very promising at the beginning,” he said, referring to an initial proposal in 2019 in which the developer sought to construct a 21-storey residential tower.

The building, located in the southeast corner of the Centretown heritage district, is not of great significance on its own, Flemming said. However, its proximity to the nature museum— a major landmark in downtown Ottawa — was a key factor in the heritage designation for the community.

Heritage Ottawa opposed the original proposal for the site as “unacceptable” in a letter to the city’s build heritage sub-committee.

Flemming said the historic museum should not have a huge residential building towering over it.

He said the developer, Colonnade BridgePort, then went away, worked on the proposal in consultation with the community and council, and came back last year with a smaller and more acceptable proposal.

“It’s a great improvement over the 21-storey proposal for the property, which was submitted two years ago,” said Flemming. “The proponent should be congratulated for responding to the concerns of the city staff and community.”

During the planning committee meeting, McKenney said discussions about 100 Argyle hadn’t been easy and that there had been a lot of “back-and-forth” about the development.

“There was height to consider, there was heritage to consider. It was one that quite frankly I wanted to work.”

McKenney then thanked the developer, the community and staff “just for continuing to come around ’til we found that sweet spot where this is going to really significantly enhance the part of Argyle which is across the street from the museum.”

The building was constructed in 1955 featuring a modernist style with a limestone-clad façade that contributes to the cultural heritage value of the Centretown heritage district.

The redevelopment plan was assessed as “being compatible with the heritage residential environment, reinforcing the character of the area.”

“We’re sometimes reluctant to get too excited about facadism,” said Flemming. “That’s when you tear down a building and you keep the front of it and you do some horrendous modern infill behind it.”

But in the case of 100 Argyle, he said, repurposing the old façade is appropriate.

Meg Suchon, vice-president external of the Carleton Student Engineering Society said it’s well worth it to preserve some aspect of the heritage of the original building at a redevelopment site.

“Being a part of a district usually means that you follow a certain standard or guideline,” she said. “So when that building was first built, it was modelled in a way where it fit in with the scenery of the museum.”

Suchon said the importance of preserving a building’s façade is that it retains the building’s ties to the heritage of the community.

She said preserving the façade rather than more significant structural features is a good way of safeguarding heritage while eliminating any safety risks.

Saving part of a building is tedious work for engineers and contractors, she said. “But as a member of the community, I think I would rather see an element of the building that tied into the rest of the area.”

In the News: Tuesday March 9