5 days ago 0 3 min read
We use cookies to provide a personalized experience for our users. By continuing to browse this site, you give consent for cookies to be used.
Got it!
Home > News > Transit > City of Ottawa exploring purchase of two abandoned south-end railway lines 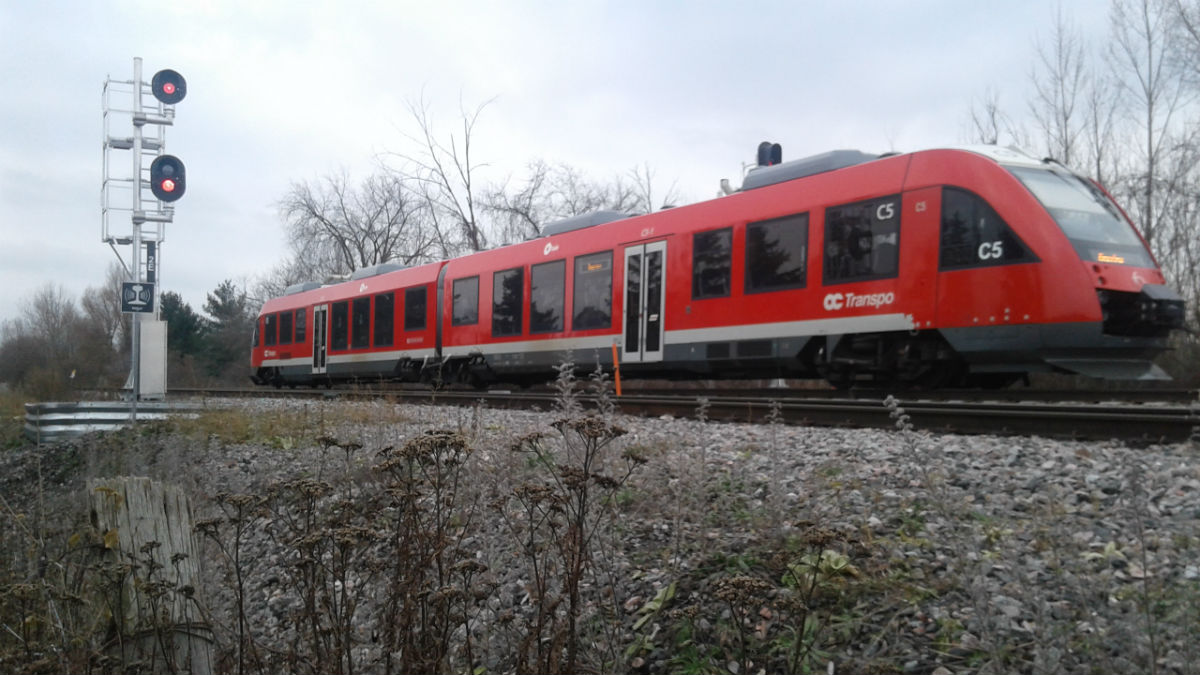 The Walkley rail line (in the foreground, to the right of the passing train) connects with the Confederation Line at Greenboro station in Ottawa South, making it attractive to the City of Ottawa as part of the future rail network. [Photo @ Hamza Ali]
Ottawa

The City of Ottawa is exploring the purchase of CN Railway’s abandoned Beachburg and Walkley railway lines in the city’s south end for potential commuter transportation in the future.

Negotiations are at an informal stage, said Vivi Chi, the city’s director of transportation planning, during a recent transportation committee meeting.

The Beachburg and Walkley corridors will become available for purchase as soon as the rail company issues a formal notice of discontinuance.

CN is planning to cease operations along the two lines after rail traffic fell below the levels required for the company to maintain ownership.

“This potential corridor could represent a low-cost, high-capacity rail corridor for our future given the area it goes through and the connection with the west of Ottawa,” Capital Coun. Shawn Menard said at the meeting.

These corridors, located just inside the Greenbelt and running roughly parallel to Hunt Club Road, are attractive to the city because of how they connect to other rail lines.

The Beachburg corridor, which used to be part of a transcontinental line linking Montreal and Vancouver, begins at Hurdman — which is also a stop on the new LRT Confederation line..

The Walkley corridor begins at Walkley Yard and also connects to Hurdman.

“There are plenty of opportunities to connect different parts of the city,” said David Jeanes, a rail transportation advocate with the not-for-profit group Transport Action Canada.

Jeanes is urging the city to purchase the corridor because of its connections with the Trillium and Confederation LRT lines.

“These lines are like a ring road. It’s a crosstown route that links across the growing parts of the city (in Ottawa’s south end) to the north-south part of the city,” said Jeanes.

In a 2007 report examining Ottawa’s transit future, the two CN corridors were considered for use in Ottawa’s future LRT network. In that early vision, instead of having the LRT go through downtown, it would have connected the western part of the city with Ottawa South using these lines.

The corridors are also compatible with the city’s transit technology, Jeanes said, making them even more attractive.

Chi said that what the corridors would be used for specifically would be reviewed.

The city already owns the Renfrew, Carleton Place and Prescott railway lines. The municipality is stockpiling corridors that can potentially be used for the urban transportation network.

“The corridor is a potential expansion of Ottawa’s rail system,” Menard said in a statement supporting an eventual purchase, “and would represent a very affordable way of getting from central Ottawa to the west end and vice versa.”

He added: “The reason it is so compelling is it is outside the traditional core but is in high-density, traditionally congested areas. Surface commuter rail would be a very welcome addition for us, in my view.”

“The law actually encourages the city to purchase abandoned corridors that could potentially be used in the future,” said Jeanes.

When a corridor owner intends to sell, it must tell the government about that plan. This gives the government an opportunity to purchase the rail line to help benefit the public.

Governments also acquire these lines at salvage value instead of the commercial price.

Menard said the city would fund the purchase as part of its normal capital expeditures.

There is no schedule for negotiations. But the city has up to three years to negotiate a deal after being notified when rail corridors become available.

Negotiations can go to arbitration, during which the Canadian Transportation Authority would be brought in to determine a salvage value.

“It is the city’s intent to acquire the lands,” Menard said.