6 days ago 2 min read
We use cookies to provide a personalized experience for our users. By continuing to browse this site, you give consent for cookies to be used.
Got it!
Home > Capital Currently > City poised to take over stabilization of Magee House in Hintonburg 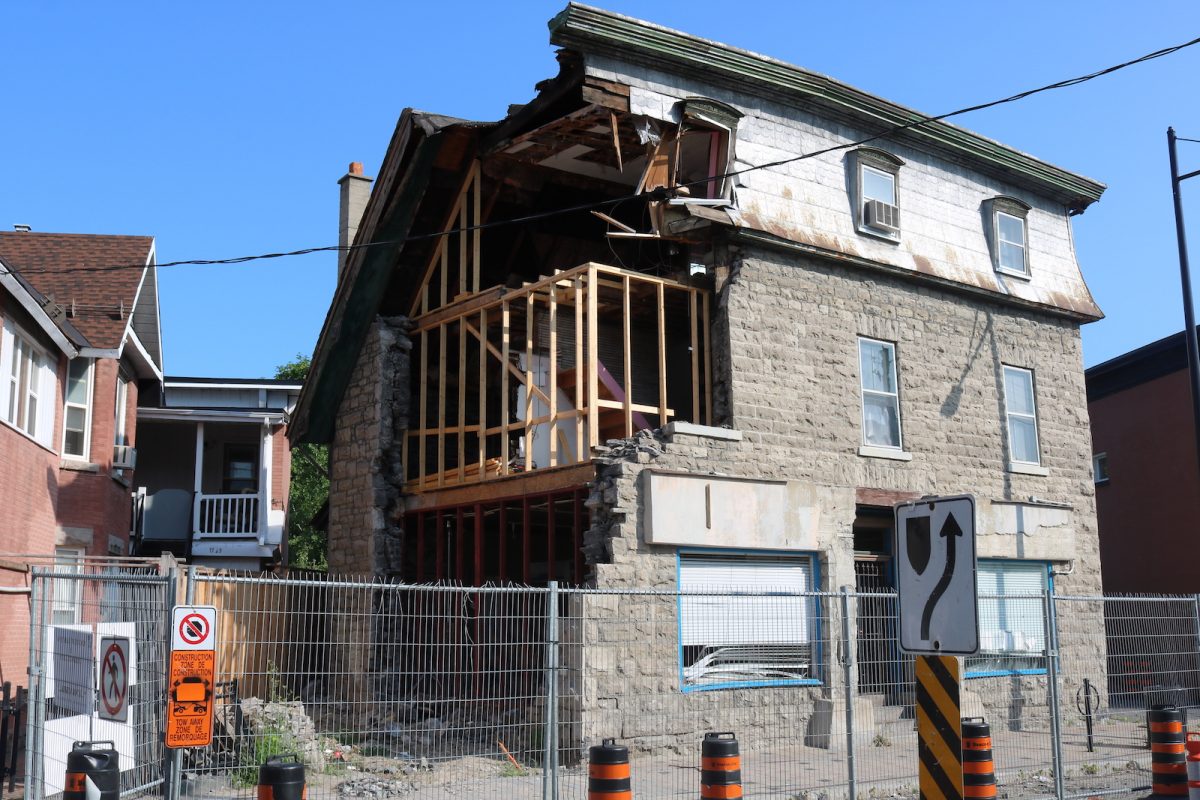 After a full year of being forced to detour around the partially collapsed Magee House in Hintonburg, frustrated residents of the area protested Wednesday for the sidewalk on Wellington Street West to be reopened.

Built in 1874, Magee house was designated a heritage property in 1996. It is said to be one of the first buildings to be built in the Wellington area.

On July 24, 2018, the west wall of Magee House collapsed, and since then a stretch of sidewalk in the heart of the west-side community has been closed for safety reasons.

Residents say the closed sidewalk is a huge challenge, particularly for people who require assistive devices and wheel chairs, as well as those with visual impairments.

“To have this sidewalk closed off, it’s a real nuisance — not only a nuisance, it’s a hazard,” said Ellen Lougheed, a board member of the Hintonburg Community Association.

Ovidio Sbrissa, owner of Magee House stood on his property, which was on the other side of the fence watching the residents protest.

He said he doesn’t understand the frustration of the community. “What is so hard for them to walk across the street and do a detour? I do it all the time,” he said.

“How many people have been hurt in one year?” he added. “Nobody.”

HCA president Larry Hudon acknowledged that some local residents have been jaywalking to avoid the Magee House barrier rather than crossing safely at an intersection.

Hudon added, however, that the solution is to get the building stabilized and to reopen the sidewalk.

“Why give people the temptation to put themselves into danger?” he said. “Open up the right of way. This is an infringement on our rights.”

As a person with a physical disability, Lougheed said she’s aggravated by the ongoing issue and sees no urgency from the city to do something about it.

“The property owner can have any number of excuses, but it should be the city that overrides those excuses,” she said. “It shouldn’t be up to the people to do the city’s job for them.”

Kitchissippi Coun. Jeff Leiper said the city is “obligated to work in good faith with the owner” as long as he is “demonstrating progress” on repairing the building.

However, a year has gone by and that good faith has run out, said Leiper. He announced that Aug. 2 is the deadline for Sbrissa to complete stabilization and allow the sidewalk to be reopened.

If the work is not done by then, the city would take over and hire contractors to undertake the stabilization.

“It is the city’s intention is to go in and begin the stabilization, and that work will be charged back to the owner,” said Leiper.

When that time comes, said Hudon, “we will be watching closely, hoping that the city does the stabilization and they can work with the property owner.”

He added: “They have a responsibility to us as citizens to open this right of way.”

Ontario is expected to extend the state of emergency in the province to June 30 from June 2 following a vote in the… https://t.co/8tUyvqVIQj