5 days ago 0 3 min read
We use cookies to provide a personalized experience for our users. By continuing to browse this site, you give consent for cookies to be used.
Got it!
Home > Transportation > City to double fleet of rentable e-scooters after successful 2020 pilot project 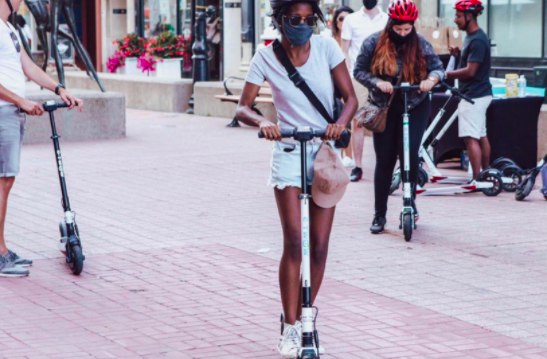 With the capital in the grip of the pandemic last year, the City of Ottawa ran an electric scooter pilot project between July and October. It was a resounding success, the city has concluded, and councillors have decided to allow 1,500 rentable e-scooters this year – more than double the number of in 2020.

The summer and fall project was considered especially successful because many people were looking forward to outdoor activities because of the pandemic restrictions on indoor gatherings.

With a maximum speed of 20 kilometres per hour, 600 e-scooters rolling in the summer provided by the companies Lime, Bird Canada and Roll. Each had their own app, pricing and scooters.

According to the City of Ottawa, 72,720 riders took more than 238,000 trips on rented e-scooters. Almost half of the 4,448 users who responded to a survey regarding their experience said they were less likely to drive a car because of the availability of the devices and one third said they traveled less often as car passengers.

“E-scooters also helped support local businesses, with nearly half of all trips starting or ending in a business improvement area, and around one third of survey respondents riding a scooter to a local business or restaurant,” a City of Ottawa review concluded.

Nadia Hamoui, 20, described her experience riding e-scooters as “thrilling and fun. I definitely see myself doing it again next summer.”

Seventy-six per cent of riders who took part in the survey said they decided to try the scooters purely as a leisure activity, another 51 per cent said they wanted to “try out the service,” and 49 per cent used it to “get to/from social activities.” Some of the other uses were “get to/from work” and “run errands/appointments.”

Kat Walcott, an Ottawa resident and social media manager, said: “It was my first time, so I was nervous, but the scooters are easy to use. I ended up having a blast and felt comfortable pretty quickly.”

Walcott added: “Unfortunately, some people were irresponsible – riding on sidewalks, leaving the scooters lying in the street … People need to follow the rules if we want nice things.”

Finding scooters in unsuitable locations or pedestrians feeling unsafe on sidewalks where scooters were also traveling were common concerns.

Vohra also suggested “maybe more centralized locations for pick-up and drop-off. On one hand, it was nice that they were all over the place because sometimes you could find them just on your way. But if you’re two or three people and there’s just one, it kills the whole vibe.”

As a solution for this issue, when announcing the approval of e-scooters for 2021, the City of Ottawa said: “To mitigate concerns about improper parking and users riding on sidewalks, operators would have to provide a way to report improperly parked e-scooters in the app, monitoring and moving them as needed, and warning or removing riders for parking violations. There would also be some designated parking areas, with operators providing incentives to park in them.”

Coralie Bourjolly, 21, expressed safety concerns: “They already say it when you download the app that you’re supposed to be wearing a helmet and that you’re not supposed to be driving under the influence. But no one is really there to tell you to put on that helmet, or make sure that you are sober or of age,” she said. “I remember seeing two guys on one scooter. That did not look safe.”

Walcott said that, “the city has to be more clear with the rules and consequences more consistently to make sure people are using e-scooters safely.”

Bourjolly suggested there should be designated areas for e-scooters in the urban transportation network. “They should have lanes for us, or have a safe space for us.”

Twenty-year-old Serena Vohra explained that riding an e-scooter near cars was “the scariest thing, especially when you don’t know how to ride it.”

Hamoui said: “The one thing that I did not like, though, was that there were areas where the scooters just turned off. You had to carry it or roll it and it was such a pain.”

On the e-scooter apps, riders received a map with green zones and red zones. Once an e-scooter entered a red zone, the e-scooter would make a beeping noise and then stop. Every company provided a map with deployment their own areas, but they were all very similar.

Sometimes they would stop suddenly without warning. Although the geographical limitations were presented on the app through the map, riders often found themselves outside of the permitted areas, dragging their scooters back.

This shortcoming, however, did not curb demand for the scooters. During July and August, some weekends saw up to 4,500 rides a day, although there were only 600 e-scooters available, according to the report.

Perhaps the biggest concern, though, was that riders wanted to explore other areas where they could freely ride. The designated area was downtown Ottawa, which was crowded with cars and pedestrians during the summer.

When asked what would encourage them to take more trips, 54 per cent of the survey respondents said the “expansion of the deployment area to include other neighborhoods.”

Although scooters were only available downtown, even there, the areas where they could be taken to were very limited.

“I think they’re wasting it,” said Vohra. “If you’re going to do the scooters, you might as well use them to their full potential. Put them at places where people can benefit from them,” such as all key tourist zones, she said.

Fifty-four per cent of survey respondents said the improvement they would like to see is “expansion of the deployment area to include other neighborhoods,” and 48 per cent said: “Presence of protected bike lanes or cycle tracks on my route.”

Overall, those interviewed about using e-scooters reported positive experiences with only minor problems. Vohra said: “It was always a good time, and I really do hope they come back.”

It's #Patioszn again: People in Ottawa heading outdoors to meet for a meal despite rising COVID cases

Ottawa's drag queens have kept their art alive during COVID-19