2 days ago 0 4 min read
We use cookies to provide a personalized experience for our users. By continuing to browse this site, you give consent for cookies to be used.
Got it!
Home > Life > Cooking and COVID: What my tiny, dysfunctional kitchen taught me during the pandemic 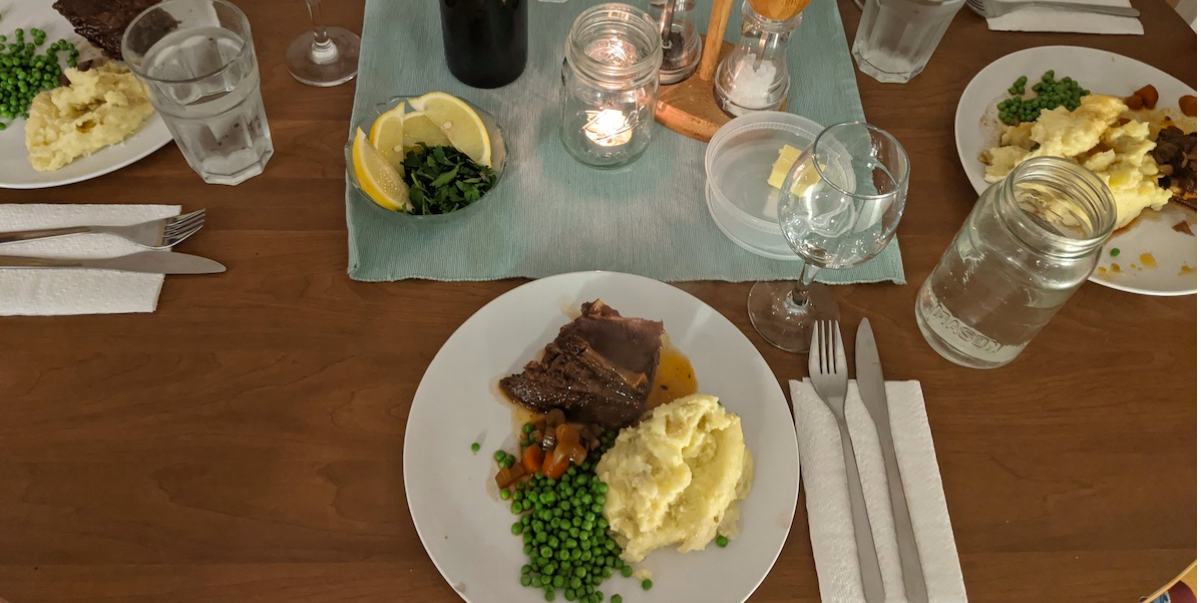 The table set for a small, COVID-safe birthday dinner featuring my very first attempt at a braised beef short rib. Cooking has become a creative outlet and a form of catharsis for me during the lockdown. [Photo © Michaela Bax-Leaney]
Commentary

Cooking and COVID: What my tiny, dysfunctional kitchen taught me during the pandemic

For most students, in the quest for affordable housing, the range of amenities in their home is highly limited. If it’s within your budget and has four walls and a roof, it’s typically a contender.

My current kitchen is, in fact, an upgrade from its predecessor, which was an honest-to-goodness Harry Potter cupboard-under-the-stairs situation. However, the new one is far from functional and even further from perfect.

The cupboards are crooked, coated with peeling white paint that was doubtlessly slathered on between tenants instead of giving the place a proper cleaning. The handles wobble, and sometimes pop off if you pull hard enough. Some don’t even open, as they were built in such a way that the stove juts out just far enough to block the hinges.

There’s a load-bearing post squarely in the centre of the room, and despite an enthusiastic bleaching when we moved in, we still lined our drawers with cardboard rather than confront some of the more alarming discolorations.

Counter space is a hot commodity, and my roommate and I can only dream of such luxuries as a dishwasher.

And yet for all of its many, many shortcomings, my teeny little kitchen has become my quarantine safe haven — a place for me to destress, be creative and cultivate love and quality time.

The people in my life will quickly tell you that the way in which I show love is through doing — and pre-COVID, that typically amounted to inviting people into my home and sharing a meal. The very first Thanksgiving dinner I ever cooked, I somehow managed to pack 18 hungry people into my basement apartment and feed them all. There was joy in the process, to be sure, but I viewed cooking as a means to an end.

And then, the pandemic arrived. My roommate left the city for the comforts of home, and my social circle contracted dramatically, as did everyone else’s. My girlfriend and our other close friend formed our bubble — all of us now roommate-less — to ride out what we were sure would be an ordeal lasting a few months at most.

As the weeks of boredom and perpetual uncertainty took its toll, like many others around the world were doing, I turned to the kitchen. Cinnamon rolls, angel food cake, a carrot cake and apple crumble were among my early quarantine hits. Some were easier than others, but all of them were labours of love, to be shared with the two people who now comprised my entire world.

I had always enjoyed cooking shows, reading recipes, and looking at photos of impossibly beautiful dishes on Instagram. But I had never had time to really flex my creative muscles in the kitchen; usually, I stuck to the few dishes I knew I did well when cooking for others. But now? I had nothing but time.

Passover rolled around and my Jewish girlfriend, separated from her family, lamented the matzah and kugel she was missing out on. So matzah and kugel I made, as well as a massive loaf of Challah.

I perfected my pastry technique and made quiches and pies. Samin Nosrat’s focaccia recipe — complete with the 24-hour long fermented dough — made an appearance. I even did a 24-hour brined chicken.

When the farmer’s market announced they would be able to open, I was utterly thrilled. I gushed over the beautiful spring produce — rhubarb, cucumbers, lovely bunches of oyster mushrooms. They became the stars, respectively, of a custard cake, a Greek salad and massive pot of fettucine alfredo.

I had always enjoyed cooking, but I found myself falling in love with it. Following the steps of a recipe was a catharsis I desperately needed, and I was able to cook with a level of care I never had before.

I write this not because I think my experience is an extraordinary one, but precisely because I believe it was and is so very ordinary. The pandemic has taken so much from us all, and while a vaccine is at hand, it’s apparent that this confinement is a burden we’ll all have to bear a while longer.

The few things it has given us, we must hold onto that much more dearly. For me, that means my tiny, dysfunctional kitchen and I are just getting started.