6 days ago 0 6 min read
We use cookies to provide a personalized experience for our users. By continuing to browse this site, you give consent for cookies to be used.
Got it!
Home > News > Ottawa > Councillor, local communities concerned they are being shut out of Tunney’s Pasture redevelopment plan 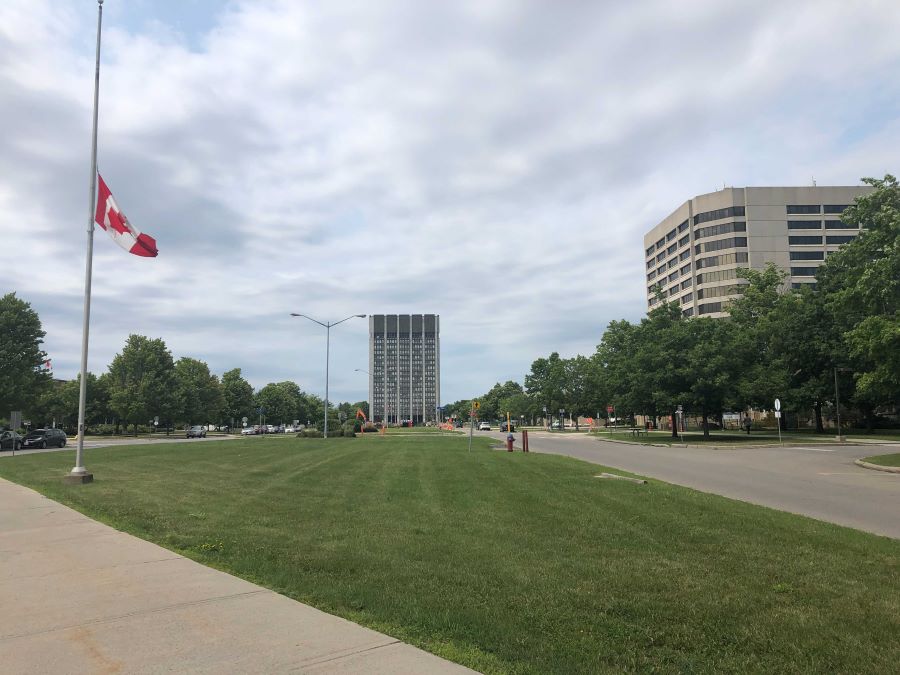 The 49-hectare Tunney's Pasture site will be transformed into residential and commercial development, office space for up to 25,000 employees, a community park, and a public plaza. [Photo @ Rebecca dePencier]
Development

Councillor, local communities concerned they are being shut out of Tunney’s Pasture redevelopment plan

Saying they have been left in the dark since 2014, a city councillor and surrounding community groups are demanding some answers to their questions about the redevelopment of Tunney’s Pasture from Public Services and Government Services Canada (PSPC).

They are also putting pressure on the federal government to be included in the planning process for the massive property which is bounded by Scott Street, Parkdale Avenue, the Sir John A. Macdonald Parkway and the Champlain park community. The site is a 49-hectare (121-acre) federal campus with 22 buildings. In 2014, the federal government announced it would begin a process to redevelop the site.

“Right now, our main goal is just to get information shared,” says Dave Allston, president of the Wellington Village Community Association (WVCA) and core member of Neighbours for Tunney’s.

“There’s been nothing at all shared with the city,” he says. “As neighbours, you want to be able to know what’s coming as soon as you can because you have to prepare for the impact that it’s going to have on the community.”

According to the Tunney’s Pasture Master Plan (TPMP), the site will include residential and commercial development, office space for up to 25,000 employees, a community park and a public plaza.

Kitchissippi Coun. Jeff Leiper says although the city has a basic understanding of what the development will look like, “the actual implementation of that plan still leaves a lot of questions unanswered.”

“The big piece that’s missing right now for me is the opportunity to weigh in one more time on the master plan with the various requests that the community has, like greener corridors, an emphasis on affordable housing and the creation of some recreation infrastructure.”

This spring, WVCA launched a survey to determine what the community wants to see included in the Tunney’s Pasture development.

According to nearly 500 responses from the community, the development interests that take highest priority include parks, green space, and sports facilities, preservation of natural areas and connectivity to the Ottawa River and path network.

Leiper and Allston are concerned that the plan for Tunney’s will not account for the specific needs of the community like substantial greenspace and recreation facilities.

“Any developer is absolutely going to want to maximize any land that they build on and minimize the amount of green and recreational space,” says Allston.

Fifteen to 20 years from now, Leiper says there will probably be close to 600 new residents living in Tunney’s Pasture.

To support the population growth, and to ease the pressure on facilities already at capacity, “I think Tunney’s Pasture is one of the few opportunities we have left to try to ensure we have land for building a proper recreation centre,” he says.

“I hope there is an opportunity to determine whether or not the plan is still absolutely the right plan.”

Canada Lands and PSPC are currently planning activities to engage with the public on the matter, writes PSPC in an email statement, “to ensure that a variety of perspectives are heard during this next phase of the planning process.”

A public information session is planned for fall 2021 to communicate further information to those interested about what the next steps are, they write. Topics for discussion will include public amenities, open spaces and residential uses.

The email went on to say that Tunney’s Pasture will continue to be a key federal employment hub, in addition “to providing new residential and green space opportunities that will offer a complete work-play-live community.”

In addition, the department says it is keeping Indigenous groups informed about the redevelopment and to “establish a relationship for ongoing discussions on potential participation opportunities. Canada Lands is also meeting with City and local elected officials to inform them about the project.”