3 days ago 0 5 min read
We use cookies to provide a personalized experience for our users. By continuing to browse this site, you give consent for cookies to be used.
Got it!
Home > Community > Indigenous > Intentions and hesitancy: Social media, family, friends among key reasons influencing Indigenous Peoples’ choice to get vaccine, survey shows 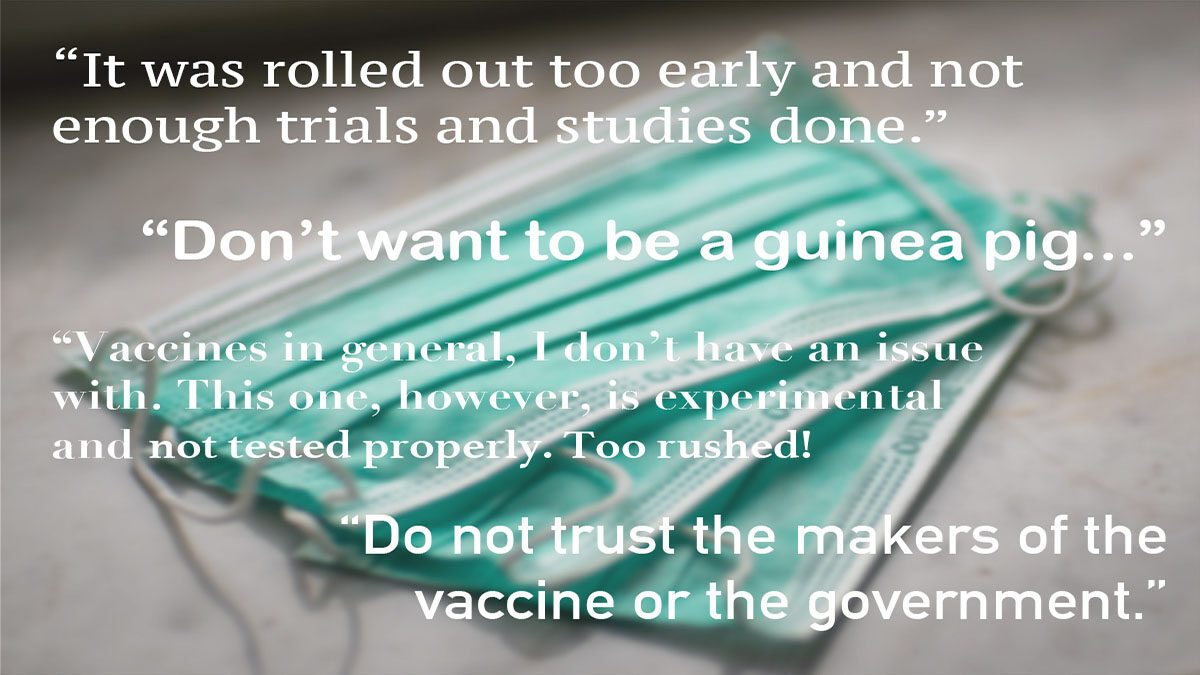 These are some of the quotations about vaccine hesitancy that were given during a survey conducted by the Social Impacts of COVID-19 team at the University of Manitoba, Association of Canadian Studies and Leger Marketing. [Graphic by Max Peacock]
Canada

In contrast, Indigenous peoples who use traditional media, local and provincial governments for information on the virus expressed more willingness to get vaccinated, the survey presented by Avery Hallberg, a graduate student at the University of Manitoba, showed.

Hallberg, along with a team of researchers at the university, has been conducting rolling panel surveys on vaccine intentions since September 2020 in collaboration with Association for Canadian Studies and Leger Marketing.

Hallberg said family, friends and coworkers seem to have “a strong influence” on respondents as does social media, when it comes to accepting to get the COVID-19 vaccine.

In addition, 27 per cent of Indigenous individuals who relied on friends, family and co-workers for COVID-19 information and 50 per cent of those who gathered their information from other sources such as community elders and religious leaders did not want the jabs, Hallberg said.

One of the most common reasons for vaccine hesitancy is skepticism about the vaccine’s safety.

Lori Wilkinson, professor of sociology and criminology at the University of Manitoba, said 13 per cent of Indigenous Peoples and 12 per cent of non-indigenous say they do not know if vaccines are dangerous in general.

“That category of don’t knows, are the interesting group because we think that they could be informed to make a better decision for themselves,” said Wilkinson, one of the lead researchers of the ongoing study.

Wilkinson said she feels that some hesitancy happened because the federal, provincial and local government messages to encourage vaccination have not captured the group who were unsure about vaccines.

She referred to promotional messages, some of which asked people to get vaccinated “if they want to go to a hockey game” or “hug their grandma.”

She said these messages aren’t capturing the reasons why people are hesitant.

According to the survey some of the main reasons why Indigenous people did not want to get vaccinated were — the vaccines are too new or rushed, the fear of side effects and allergic reactions.

“What was a bit surprising about this is that even amongst Indigenous people, the trust in government didn’t come out as often as we thought,” Wilkinson said, referring to the reasons for hesitancy.

Biomedical experiments have been carried out on Indigenous communities and residential schools in Canada, often without individual consent.

Wilkinson said, however, most of the hesitancy was about the novelty of the vaccine, as opposed to “I don’t trust the government, because they’re making me take it.”

The survey on vaccine intentions and hesitancy is part of a bigger study on the social impacts of COVID-19, being conducted in Canada, the United States and Mexico with funding from the Canadian Institutes of Health Research.

Each week, about 1,500 people from each of the three countries are polled on the internet. A qualitative survey is also completed every two months among a larger group in all three countries.

Councillor, local communities concerned they are being shut out of Tunney’s Pasture redevelopment plan