2 weeks ago 0 1 min read
We use cookies to provide a personalized experience for our users. By continuing to browse this site, you give consent for cookies to be used.
Got it!
Home > News > Canada > Ontario > Critics of Ontario’s Bill 23 say need for housing shouldn’t trump land protection 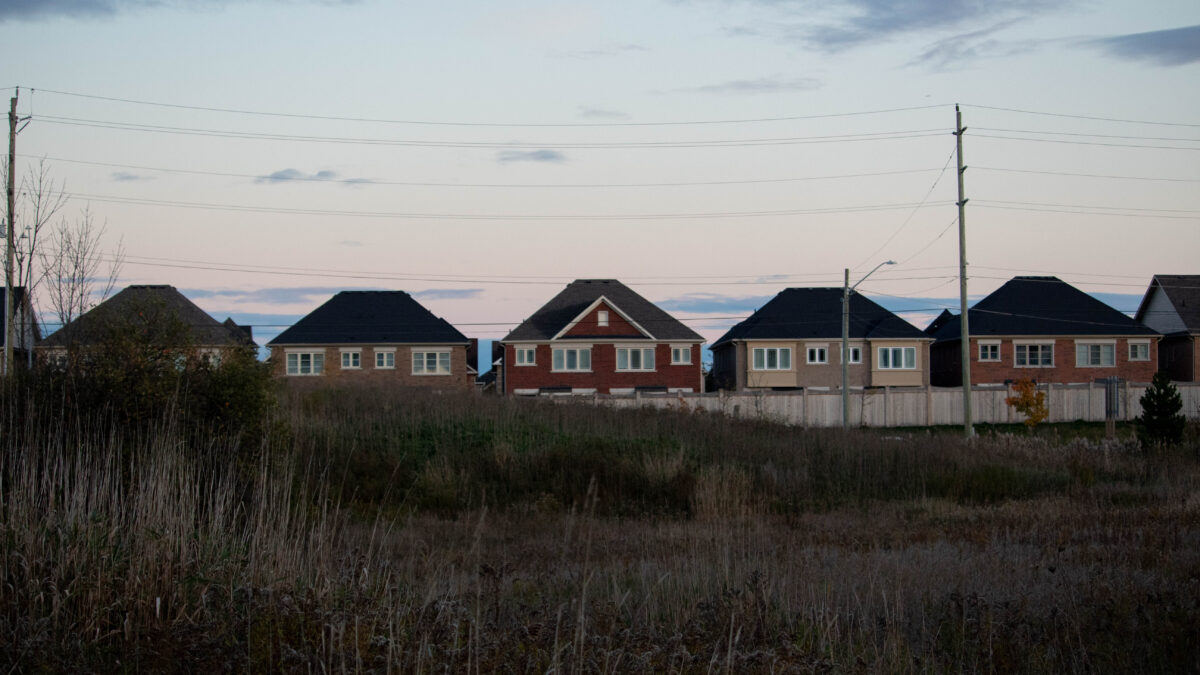 Much of the town of Caledon, Ont., north of Brampton, is located on the Greenbelt. Housing developments are slowly encroaching onto land long deemed protected. Critics fear the Ontario government's new law Bill 23 will accelerate that process. [Photo © Rebecca Weston]
Community

Critics of Bill 23 — the controversial Ontario legislation aimed at kickstarting homebuilding in the province — say opening parts of urban greenbelts for development will reduce flood protection, endanger species and result in the loss of some of Ontario’s best agricultural land.

Ontario’s Progressive Conservative government say the bill, which became law in late November, is necessary because of the continuing housing crisis in the province and a predicted rise in immigration.

“So we’ve been talking to our partners hoping to help others understand what’s at stake if we lose watershed protection in Ontario,” said Coleman.

Coleman says Conservation Ontario is working with other environmental advocates, municipalities and conservation authorities to bring more awareness to the impacts of building on the Greenbelt around the GTA that has been serving as a natural buffer around urban developments.

Conservation Ontario is allying with “important partners that understand what’s at stake if we don’t do a good job of this,” said Coleman, adding that the Insurance Bureau of Canada and its member companies “recognize how much the work of conservation authorities help them to reduce losses.”

Burlington Mayor Marianne Meed Ward said in a recent news release that the bill will bring more challenges to municipalities.

“Bill 23 will devastate municipal finances and our ability to fund things such as parks, community centres, transit — all the amenities a growing community needs,” Ward said in the statement.

The Ontario Federation of Agriculture has also been working to spread awareness about the amount of valuable farmland already been lost to urban sprawl.

OFA vice-president Crispin Colvin said Bill 23 is taking away municipalities’ ability to do conservation planning, which is threatening prime agricultural land in classes one, two and three — the richest, most productive soil types.

Much of class one and class two land in the province is located in the GTA Greenbelt, the Holland Marsh and around London, Windsor-Essex and Niagara.

‘We understand what the government’s trying to do here. But we just think there are smarter ways to get there, and then we can build the housing we need somewhere else — not in the Greenbelt.’

“It’s frightening, quite honestly — it really is,” said Colvin. “At the continued loss of land, we run the risk of becoming a country that may have to import its food.”

Colvin said there is a recognition people need a place to live, but added that humans also need food.

Created in 2005, the Toronto-area Greenbelt is located just north of the city and consists of two billion acres of protected land.

The goal of establishing where this protected land would be was to prevent further farmland loss, promote natural heritage and restrict urban sprawl.

“If we start developing the types of lands that are in the Greenbelt, it’s not going to be a good news story for a variety of different groups of birds,” said Doug Tozer, director of Birds Canada, a non-profit organization that works to bring attention and understanding to bird conservation in Canada. “Everything from grassland birds, forest birds, wetland birds, aerial insectivores — you name it — all these groups prefer predominantly natural and rural landscapes.”

According to Tozer, it will be critical to make sure the natural features these birds rely on are connected rather than fragmented by urban land use.

“We understand what the government’s trying to do here,” said Tozer. “But we just think there are smarter ways to get there, and then we can build the housing we need somewhere else — not in the Greenbelt.”

Ontario Premier Doug Ford says his government will add 9,400 acres of land to the Greenbelt in different areas.

After Bill 23 was passed, the government said it is “consulting on how it manages natural heritage, including improving the management of wetlands, while supporting sustainable growth and development.”

The statement added: “Ontario is seeking input on integrating A Place to Grow: Growth Plan for the Greater Golden Horseshoe and the Provincial Policy Statement into a single, provincewide planning policy document. This review also includes a consultation on how to speed up housing development and increase housing supply (including rural housing) through a more streamlined, provincewide land use planning policy framework, while continuing to protect the environment, cultural heritage and public health and safety.”

“I think it’s easy to fall for this trap, so to speak — you take some land away, you add some land over there (but it’s) still the same amount of land in total, no problem,” said Tozer. “But actually, we think it’s a huge problem.”